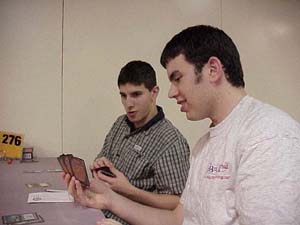 "It was a very hard build - I used the full 45 minutes," was how Chris Benafel described his deck building process. Benafel has been on quite a roll this season: he left Pro Tour Tokyo over $30,000 richer thanks to his 4th place finish in the PT itself plus team AlphaBetaUnlimited.com's win in the Masters Series. Benafel's team - AlphaBetaUnlimited.com - had quite a weekend at Pro Tour Tokyo and Chris was right in the middle of everything. He was one of the four ABU's who made the Top 8 of the PT and he was one of the 3 on the team that not only grinded its way through the Gateway tournament, but won the Masters Series itself. Over $30,000 richer, Benafel turned his attention to Grand Prix Detroit. So the last 4 Grand Prix he's attended, Benafel has put up a 2nd place in Dallas, an 11th in New Orleans, a 1st in Amsterdam, and an 8th in Boston.

Benafel had quite a collection of juicy gold cards to choose from: Shivan Wurm, Charging Troll, Darigaaz's Charm, Smoldering Tar, Shivan Zombie, Yavimaya Barbarian, a pair of Horned Kavus, Sawtooth Loon, and Recoil were among them. Benafel's red and green looked quite good with Magnigoth Treefolk, Serpentine Kavu, Kavu Climber, Explosive Growth, Aggressive Urge, and Stone Kavu joining the nice gold beats from the green side while Mire Kavu, Rogue Kavu, Caldera Kavu, Ancient Kavu, Thunderscape Battlemage, and Thunderscape Familiar came in form the red side. However, when Benafel lined it up he found that he didn't have enough quality spells and there wasn't much he could add.

Benafel insists on playing an essentially two-color deck with just a splash of a third color in Invasion-block sealed deck. It's that constraint that created his problems for him Saturday morning, but given his results, it's very hard to disagree with his strategy. He certainly didn't want to run Duskwalker or other double black spells off just 3 Swamps so he started lining up other decks. Red/Green/white was also a few spells short, as were Black/Red/Blue and white/green/blue. "I could have really messed up the mana and gotten enough cards, but I wanted consistency." Blue/White with just a touch of black is what Benafel eventually decided on, saying "The creatures are the best this way and every other build came out to 20 cards." 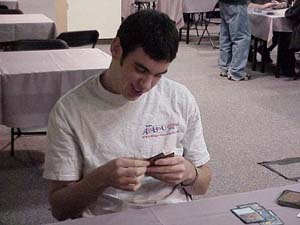 By building his deck this way, Benafel was able to put in 9 and 8 sources respectively of his two main colors (white and blue) plus 4 sources of his splash (plus Dream Thrush). He's certainly got a consistent mana base and, as he says, "I'd rather lose to having worse cards than lose to my mana."

The other trademark Benafel strategy that crops up again here is that he's running 41 cards. For years, the conventional wisdom has been to always always always trim sealed decks down to exactly 40 cards. Benafel along with his teammates Ryan Fuller and Noah Boeken, however, have been running 41 cards and 18 land consistently for months now. They believe it gives them a much better land to spell ratio. 18 lands in a 40 card deck leaves only 22 spells, which opens up too many losses to mana flood they argue, while 17 lands is too few for a 3-color sealed deck. So the best option is 18 lands in a 41 card deck. Benafel did concede that when he has a deck that only needs 17 land (like a green deck with Harrow and an Elf or something similar), he'll drop down to 40 cards. In the typical sealed deck, though, Benafel swears by 41 and 18.

As far as his deck's chances overall, Benafel just shrugs and says "I'll just try to outplay some people and we'll see what happens."