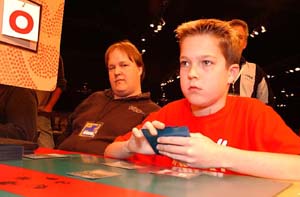 Without a doubt, Cole Swannack is the big story of the first day of competition. Some eyes were on the thirteen year old New Zealand National Champion coming into Worlds, but the novelty interest of a young National Champion has turned into serious surprise, as Swannack went 5-1 in today's Standard portion, beating accomplished Pro Tour players such as Gary Wise and Albertus Law. While it's still a bit early to jump to conclusions, the buzz around the venue today is that Cole would look great as a World Champion on the cover of Sideboard Magazine. Gary Wise even told Cole as he extended his hand in defeat, "You're going to make a great World Champion." I sat down with Cole after the first day of competition had ended to see what he thought about his impressive showing, and his chances for the rest of the tournament.

Sideboard: How long have you been playing?
Swannack: I've been playing for about four years, and started playing when I was eight.

Sideboard: Why do you like Magic?
Swannack: It's quick and a big game. There's a lot of thinking involved.

Sideboard: Is there a specific kind of deck you prefer to play?
Swannack: I like beatdown. I'd rather play beatdown than control, but I like decks with creatures and counterspells.

Sideboard: So that's like what you're playing today.
Swannack: Pretty much.

Sideboard: Do you have any other hobbies besides Magic?
Swannack: Yeah, I play Basketball, and...Magic Online!

Sideboard: Like everyone else!
Swannack: Right. And I play lots of sports.

Sideboard: How does it feel to be a National Champion?
Swannack: Pretty good. It's not much being New Zealand...

Sideboard: Well you got to carry the flag!
Swannack: That's good, yeah.

Sideboard: Do you think you're ready to hang with the big boys like Kai and Finkel even though you're only thirteen?
Swannack: Nah, not them.

Sideboard: Well you're 5-1, you might have to tomorrow.
Swannack: (Laughs) Yeah, it's not bad.

Sideboard: I hear that two years ago when the Invitational was here, you were there and you were watching every single match. Did you learn anything?
Swannack: Yeah, I was learning style of play, and just little things, little tips of what they were doing while they were playing. Not so much how they played it.

Sideboard: So you mean how they were acting physically to show what they were thinking?
Swannack: Right.

Sideboard: Anyone specific you admired while watching them play?
Swannack: No, not really. Just little things. I wasn't very good at that stage.

Sideboard: How does it feel to be getting so much attention? You had a huge crowd cheering you on against Gary Wise.
Swannack: That's not bad! I'd prefer not, it's less pressure that way. 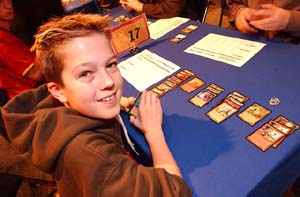 Sideboard: By the same token, some people might see a thirteen year old and underestimate you.
Swannack: It's better in draft where they don't know if you're taking the signals and things like that, but a lot of people have heard about me now, so...

Sideboard: Worlds is pretty close to home for you, isn't it?
Swannack: It's a lot better. I don't get jetlagged, and I prefer a three hour flight to a fifteen hour flight.

Sideboard: Why did you decide to play the green/blue deck today?
Swannack: Just because it's basic and it beats Psychatog. That was the deck I was trying to beat, and it turned out pretty well.

Sideboard: How do your parents feel about this?
Swannack: They're happy. They like traveling. Mom shops and Dad sees his friends.

Sideboard: And if you do well, you'll be on the Pro Tour and they'll be able to travel all over with you.
Swannack: Hang on, that hasn't happened yet! Wait until that happens!

Sideboard: Do you feel any pressure now that people are saying you're going to win the whole thing? After you beat Gary, he extended his hand and said "You're going to make a great World Champion." Do you feel any extra pressure now that some people are actually expecting you to make Top 8?
Swannack: No, I'm not really bothered. I still I don't have high expectations, because other people aren't expecting me to do well. This is my first Pro Tour, so...

Sideboard: Well, then do you feel any added pressure personally?
Swannack: The pressure doesn't really get to me.

Sideboard: Any predictions?
Swannack: Anything can happen.