Communication and Leadership with Team USA

ere at the World Magic Cup, there are over 70 countries represented, each comprised of a National Team Captain, the player from each country with the highest number of Pro Points last season, and three other members who qualified through World Magic Cup qualifiers. With each team helmed by last year's best player, each team is guaranteed to have at least some veteran guidance from their Captain. Some teams, such as Belgium and Sweden, are stacked with talent. Others combine players with much less experience on the professional side of Magic.

As we've seen from last year's World Magic Cup, it is impossible to write off the teams that might lack the experience of the stronger teams in the field. One of last year's biggest storylines was Team Uruguay, which was one of the least experienced teams in the field. Despite this disadvantage, they rallied, defeating some of the top teams in the world to finish just shy of making it to the final rounds of play. Last year's finalists from Puerto Rico were more experienced than Uruguay, but they still lacked the raw power of, say, the United States, which featured Hall of Famers Brian Kibler and Luis Scott-Vargas, who finished outside of the Top 8.

From the stacked teams to the less-experienced ones, communication and leadership are very important things to consider. Who is the one making the calls, and how are they getting the point across? One member of each team is sitting out and coaching each round, and it is up to each team to decide who this coach is and what their role entails. For some teams, the weakest player in a given format is relegated to the coaching slot. Teams do this to present the best possible three-man front for each format. For other teams, one of the stronger players on the team assumes the coach mantle, chosen for their ability to add to each match, rather than committing their full skill to a single match. 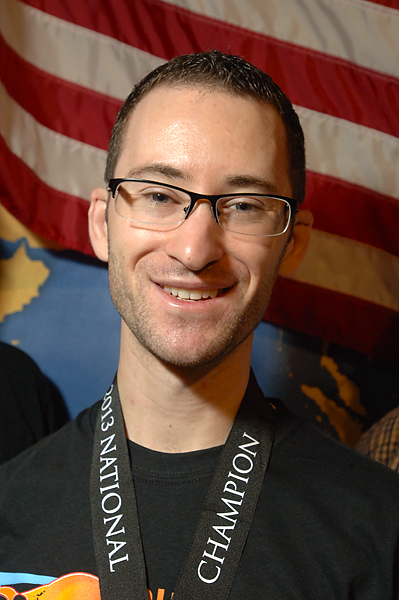 Normally, you'd expect 2012-2013 Player of the Year Josh Utter-Leyton to play when he can in a team event. However, he and his team found his best use for the team was to be a coach.

Utter-Leyton is clearly one of the top players in the game, reigning Player of the Year and Top 4 competitor for Sunday's World Championship conclusion. For him to decide to coach rather than contribute to a particular match shows a great deal of confidence in his teammates, as well as a strong belief that his biggest addition to the team is as an advisor. Still, knowing that the player sitting over your shoulder is the top player in the world can be disconcerting.

"It's both great and bad," Joe Spanier laughed, casting a sheepish grin Utter-Leyton's way. "Knowing that he is in your corner and will make sure that you are making the right play is certainly comforting. But it can also mess with your mind. It's a lot of pressure knowing that he's watching you because you become even more self-conscious about making mistakes because he might see you. I mean, it's what he's there for, but it still takes you out of your comfort zone knowing someone like Josh is watching you play."

At this, Utter-Leyton laughed, "Yeah, I can see that."

This brings another point to the front: with players more self-conscious about big brother watching them, there are often more situations where the players want to consult about decisions. The additional communication requirements this can entail makes things a little interesting for a team like the United States. Since English is the first and only language for each member of the United States team, virtually every team they will face will have at least one person on their team able to understand any overt verbal communications.

"To say that we're at a little disadvantage because of our reliance on English is a bit of an understatement," Dan Cecchetti laughed when I brought the topic up. "Imagine if we had someone on our team that spoke Spanish or German or something."

The question of language isn't a minor one, either. With many European countries sharing languages or at least language origins, there is always the chance that verbal communications might be picked up. There's a famous story about a Spanish-speaking player speaking aloud about his hand at a Pro Tour in front of his opponent from the Philippines, not knowing that his opponent was fluent in Spanish! Combating this with non-verbal communication or simply trying to be secretive can cause other problems, such as misunderstandings or miscommunications.

"We've definitely made some mistakes while I was right there watching the game," Utter-Leyton laughed.

There's also the question of how much can be gleaned simply based on the fact that there is any communication going on at all! If someone draw a card for their turn and it immediately spawns a group conference, chances are it's one that impacts the game, even if they pass the turn. Or is it? Does bluffing really come into play here, or is reading things like that into what's going on going too far?

"Oh that reminds me, guys," Utter-Leyton perked up at the question. "We need to figure out a signal to let each other know when we're just talking for misdirection."

At first, I thought he was just joking (Utter-Leyton has a wicked deadpan. Probably David Ochoa's influence). When Cecchetti, Spanier, and Gulevich began seriously contributing to the conversation, I realized that it was an honest statement. That's right, some of the conversation that goes on between the coach and the players in a particular game might all just be part of an elaborate ruse. Communication can be used as a weapon as well as it can be a weakness. 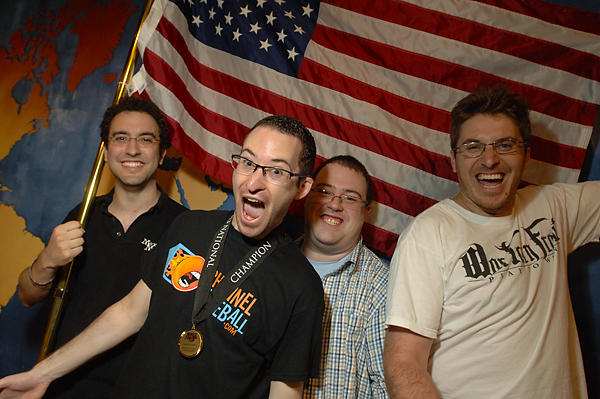 The United States team did a lot of legwork leading up to the event, but they didn't neglect other details such as creating ruses either.

Even with solid communication, though, without trust and leadership, there is little point to allowing communication at all. The coach can't be everywhere at once, and to rely on them for absolutely every decision can destroy a team. It can be incredibly hard to insert oneself into matches on the fly, and the previous actions in a turn can seriously impact a player's read on a given situation or decision.

"One of the reasons we chose to use me like this for the Constructed rounds is that it is a bit easier to slide into a Constructed matchup and understand what's going on," Utter-Leyton explained. "In Limited, the build up to a situation is way too important to let you just jump in easily."

Even despite this opinion, the United States and their matchup against the Czech Republic involved a situation that illustrated how important context can be even in Constructed. Gulevich played a Thundermaw Hellkite into Stanislav Cifka's four untapped lands, resulting in a Snapcaster Mage and Syncopate stopping the Hellkite from hitting the table. After the match, Utter-Leyton explained why he wouldn't have made the play, admitting that he'd put Cifka on having the Snapcaster in his hand based on his play over the previous turns. If he hadn't been sitting right there watching, it's something that he might have missed.

One of the most common ways to avoid over-utilization of the coach involves putting a player playing their most comfortable deck on one side of the table while the coach sits between the other two players. Utter-Leyton admitted that while all of the players are playing decks they are comfortable with, Spanier has done much more work with Hallowed Fountain decks like his UW Control deck, and he feels the most comfortable of the group. As such, Utter-Leyton often leaves him to his own devices, instead positioning himself between Cecchetti and Gulevich.

"Well, there's also the fact that I'm playing the slowest deck, so he can often just get over to me at the end of the match if it comes down to me," Spanier laughed.

It's also very important that there is a chain of command on the team. For most teams, they defer to their captain, who earned the position by having the best year of anyone on the team. For some teams, however, disagreements can be more difficult to settle. Teams like Sweden, with Joel Larsson, Olle Rade, and Elias Watsfeldt, all incredibly good players, can have differing opinions on the best way to play a turn. While having a brain trust that size usually results in a better ability to both discuss plays and make the correct play without needing consultation, I have seen situations where there was a disagreement between two great players, and the one making the play simply ignored the incoming advice and went along with their line of play. It turned out to be the incorrect one, and it spawned an argument. Too many cooks in the kitchen can make a delicious feast, but it can also spoil the food.

Utter-Leyton was also forced to put a great deal of trust in his team because of his position in the World Championship. Having to practice seven different events between the two events has put all of the national champions competing in both events in quite a bind, and it has proven incredibly tough to work as hard as players would like on both events at one.

"Oh man," Utter-Leyton sighed with wide eyes as I asked him about having to prepare for both events. "It's been really tough. Fortunately, these guys did a bunch of great work testing the decks and working on the Limited formats. They've worked really hard, and it's been useful."

Having teammates that you can count on, and counting on them, is essential to success at the World Magic Cup. We saw it last year with Chinese Taipei's run, deferring to Tzu-Ching Kuo only when necessary, and we've seen it over the first rounds so far with the United States. Showing confidence in your team is the greatest inspiration a leader can give, and it does a great deal to alleviate the fear of making a good impression or making a mistake while a respected player like Utter-Leyton looks on. So far, while the butterflies still aren't gone, Utter-Leyton's confidence in his team has reaped huge benefits. Joe Spanier, Jason Gulevich, and Dan Cecchetti can be proud of their efforts at the end of the day knowing that, even though they're being led by the Player of the Year, their success was a team effort.