From Computer to Cards 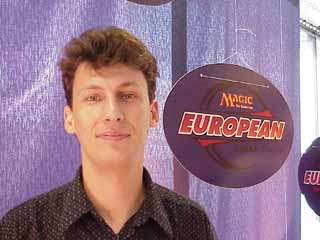 "I started to play the Microprose game, so at first I played on the PC, then I found the real cards. The computer game is not very challenging, but it is nice in the beginning because you can play without an opponent," Yuri Bagashev says. The 29 year old software engineer has now advanced even further. He finished as number eight in the Russian nationals, and qualified for the European Championship.

When Yuri started playing Magic about two and a half year ago, around Tempest, he wasn't new to computer games. But Magic was different; it was bigger and he could compete with real people. "I like the competition and the interaction," Yuri says. Now, he lives and works in San Francisco, and he plays regularly at Neutral Ground. He has also attended a few Grand Prix, and he traveled back to Russia to play in the nationals. That gave him a trip to Paris.

"I came here hoping to have fun, to get some good practice on a high level and to see how the big events work. I've never been to a Pro Tour, but I expect the level of play to be pretty close to this," Yuri says. He found that he enjoyed playing in such an event, but unfortunately the draft didn't go well for the Russian. "I played terrible, but I have an excuse. The problem was that I didn't get any sleep the night before Friday because of the national day celebration. They played music all night," he explains.

After day one, Yuri's record was 2-4. Fortunately, the Standard portion started out better for him. Two rounds into day two, Yuri had a 4-4 record after his Trinity deck had won him two matches. "The deck is simple and aggressive, and it works well for me. I feel comfortable with it. I never try to find the best deck in the world, I just find a good deck that makes me feel comfortable," he explains.

The Russian found the level of play solid, not great, but consistently high, even though he didn't face any of the name players. He also thought the players were nice, everybody except from one. "I got a match loss for insufficient randomizing of my deck. I had shuffled a lot, probably too much, because it was really randomized. There were no clumps in my deck. And when the judge asked, my opponent said that I didn't shuffle much, so I got a match loss," Yuri says.

Although no-one of the Russian players are to be found on top of the lists, Yuri reckons that will happen sometimes. "People just started playing around two years ago. There are some good players, but not that many people play. Some are good, but they aren't experts. We need some time and some experience, then we will see more success," he thinks.

However, Yuri's own ambitions aren't too high. "I have a family, a full time job and a son that is two years old. I cannot spend as much time as you have to in order to play on a high level, so I'll just have fun, play on a good level and prove myself," he says. Now that he's had a taste of high level competition, he also wants to qualify for a Pro Tour. "It's possible, even with a family," Yuri smiles, before he sends his thanks to the guys he plays with in San Francisco: "They know who they are."