We're excited to debut the brand new Pro Tour live stream of matches happening throughout the weekend. That's right, for the first time ever the Pro Tour will feature live matches streamed from the Swiss rounds all weekend long. You'll still see the same great Top 8 broadcast you're used to, and you'll see some familiar faces in the booth: Pro Tour historian Brian David-Marshall and Pro Tour statistician Rich Hagon will be up to their usual antics inside the whisper booth custom built this weekend for the broadcast. In addition to those familiar faces, coverage veteran Rashad Miller and judge emeritus Sheldon Menery will also be joining the boys to broadcast. 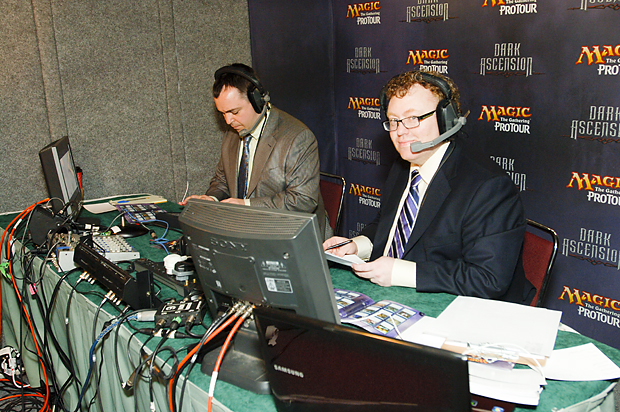 Pro Tour historian Brian David-Marshall and Pro Tour statistician Rich Hagon are in the booth this weekend, bringing you live commentary on what's happening at the Pro Tour!

Live streams won't be all there is to watch on video coverage, of course. We'll also be bringing you a host of deck techs and the usual video features, and with the expanded staff we'll be able to bring you even more coverage than usual. Live action, as it happens, with the top coverage crew in the game and more of it than we've ever seen!

Join in the Discussion

The video coverage is quite exciting and adding to that excitement is Cover it Live. With this interactive functionality you'll actually be able to participate in the discussion of the coverage as it happens. Via a moderated chat feature you can share your thoughts on a player's strategy, talk about your favorite cards in the new set, and cheer on your friends and favorites as they battle to determine who will be crowned champion of Pro Tour Dark Ascension.

Coverage veteran Tim Willoughby will be keeping you abreast of the latest happenings from the floor in real time through the Cover it Live chat feature, and he'll be joined by Social Media Community Manager Jon Hickey as well. Cover it Live is your opportunity to help shape the voice of this Pro Tour; hop into the discussion and ask questions, share your thoughts, and be a part of this excellent event!

I'll admit, I'm excited about the video and about the continued applications of Cover it Live this weekend but as an old school text reporter I'm also happy to say that we'll be bringing you the same great text coverage you're used to. You'll see awesome features (like this one!) and round-by-round feature matches between the game's biggest names. 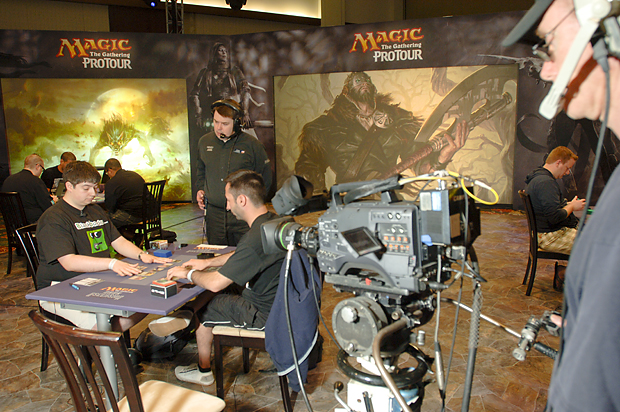 Live coverage and text reporting. You will be able to check out plenty of both all weekend!

When he isn't busy working on the chat moderation, Tim Willoughby can be counted on to bring his veteran eye to the happenings on the floor through a number of pieces he has planned on the weekend. Steve Sadin will also be here providing the Limited lowdown on the Dark Ascension and Innistrad Limited environment while also keeping a critical eye on the Feature Match arena. And of course I'll be here as well, taking a break from my duties as the Wizards Play Network Content Manager to return to the roots of the Pro Tour for an exciting weekend in Honolulu!

Finally, it would be remiss of me to not point out that you can enjoy Pro Tour Dark Ascension through your standard social media mediums as well. Long-time Pro Tour photographer Craig Gibson will be working with Jon Hickey to bring tons of photo coverage of the big event via the official Magic: The Gathering Facebook page.

This weekend will be a weekend of firsts, with the first on the list being a great coverage experience for viewing at home. But I've got to go...there's a Pro Tour to cover!