inding an undervalued strategy can often yield gains. Tom Ross understood this perfectly, taking an Izzet deck filled with cards he believes to be undervalued, and exploiting the intricate synergies within to pull ahead of Jon Stern in Round 11 of Grand Prix Houston.

Ross's deck is an interesting take on Izzet, relying on the very obvious synergies between the Izzet cards and casting spells, but using some fairly unorthodox cards to achieve his record. His 2-1 win over Canadian Pro Jon Stern put "The Boss" up to 10-1, keeping him strongly in the running for Top 8. Their pod was very difficult, featuring other strong players like Matt Costa and Shuhei Nakamura. 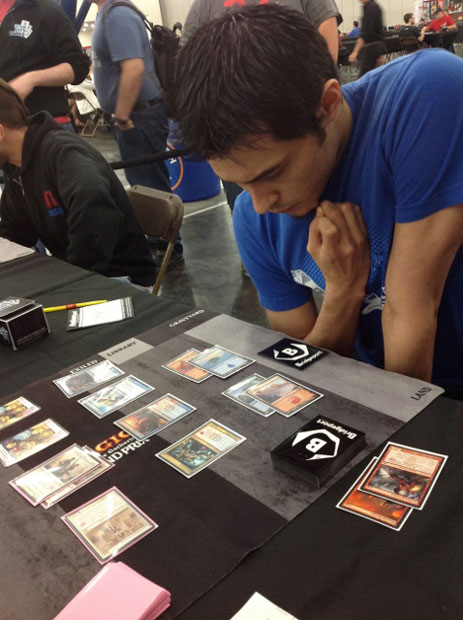 "So... Hidden Strings," Stern said as the match drew to a close.

"No, your deck is really good," Stern admitted, not wanting to seem like he was mocking Ross.

The Hidden Strings played an important part of Ross's earlier match against Matt Costa, where he used it to trigger a pair of Blistercoil Weirds twice to get through for enough damage and untap enough lands to cast Punish the Enemy for the win. You read that right. In this match, it would also prove decisive, allowing for a similar cascade of effects to end the game.

The first game certainly didn't go as Ross planned. A mulligan to five left him sitting on a very weak early board. A lone Blistercoil Weird found no early support, and Ross found himself overrun by an early set of creatures. He was able to temporarily stabilize with a Punish the Enemy, but a Hussar Patrol and One Thousand Lashes finished things off.

Game 2 was far more interesting. Both players curved out fairly well, both with reasonably aggressive draws. Ross found a Blistercoil Weird, Nivix Cyclops, and Tower Drake, while Stern went with Mastiff into Court Street Denizen into Fencing Ace. Things soon exploded when a Mizzium Mortars killed off the Boros Mastiff, powering up the Weird and Cyclops for an attack. Stern tried to block the Weird with the Ace and trade, but Ross bloodrushed a Skinbrand Goblin after first strike damage, keeping it alive and hitting Stern down to 11.

The next turns were another bout of stabilization for Stern, using a Sunspire Gatekeepers and Knightly Valor to both create an imposing attacker and fill his board with tokens. With the Gatekeeper now enormous and vigilant, Stern began to attack, slowly knocking Ross down to 2 while the Tower Drake knocked him down to 7. At this point, Ross had to begin trading off his creatures, keeping himself alive, but losing ground every turn. Punish the Enemy killed a token and dropped Stern to 4.

While Ross was drawing creatures to sit in the Gatekeepers' way, Stern drew nothing to bolster his army. A single creature would have done, but he found nothing but lands. In the end, a turn before Stern's attacks would have been lethal, a Madcap Skills on a Runewing sealed the deal, giving Ross a close Game 2.

As drawn out and interesting as the second game was, the third was faster, but no less interesting. Things began incredibly slowly. The first creature to hit the table was Ross's Viashino Racketeer. Stern followed up immediately with a Sunspire Gatekeepers that once again gained Knightly Valor. Stern continued to build with Nivix Cyclops and Guttersnipe. With then engine set up, Ross's spells went to work. Hidden Strings tapped the Knight token and the Gatekeepers, this pumped the Cyclops and shocked Stern down to 12. The second Hidden Strings shocked him yet again and allowed Ross to untap two lands for a Runner's bane on the Knight token. Stern followed that up with a 1/1 Consuming Aberration. Ross untapped and began counting. 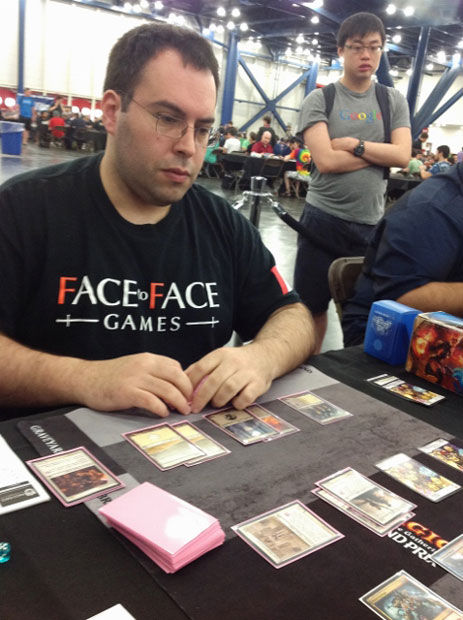 "If you're counting , I must be dead," Stern said.

A Punish the Enemy killed the Aberration and sent five damage at Stern thanks to the Guttersnipe. That left Stern a 5. Ross sent his team, and Stern observed his potential blocks. With only one creature to block, he couldn't let the Nivix Cyclops through or he was dead. He also couldn't let the Racketeer with Hidden Strings ciphered onto it though, or the Guttersnipe would kill him. It was a catch-22, with Stern unable to block and live. He simply extended the hand and sighed.

Ross was apparently very pleased with his strategy, even if he wasn't so with his deck.

"Izzet is easily my favorite deck to draft," he told me. "Nivix Cyclops is incredibly undervalued, and many of the cards from Return to Ravnica aren't wanted by other players. It's hard, though. Your deck is usually terrible until Return to Ravnica, but it almost always pays off."