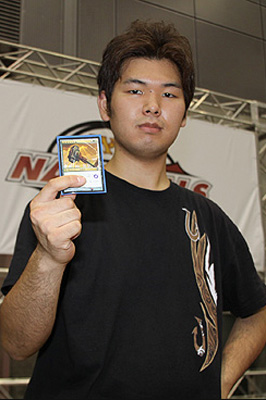 The first day of competition has come to a close, and what a doozy it’s been! Some 158 competitors from all over Japan came to try their hand at earning the title of 2009 Japanese National Champion. The players had to brave seven stiff rounds of competition Saturday, starting things off with four rounds of Standard before ending the day on a Shards of Alara-Conflux-Alara Reborn draft note. So, who wound up on top?

Only a single player escaped the masses unharmed: Naoki Sakaguchi! The 22 year old Nagoya resident is a relative unknown, exactly the resume the likes of Justin Gary, Eugene Harvey, and Gabe Walls used to leapfrog from the heights of a National team membership to international fame and fortune on the Pro Tour. To what did Naoki give credit for his solid performance on the day? Baneslayer Angel in Standard and Behemoth Sledge in Draft. The latter proved powerful enough to surge him past Masashi Oiso, the defending champion, in the very final round of Day 1 competition!

Of course, that means Masashi himself is sitting at a pretty X-1 record. He’s joined in the upper levels of the rankings by a resurgent Kenji Tsumura, and many of other big names from Japan’s horde of pro players. But who will seal the deal? Can Naoki Sakaguchi hold on to his first day of success, riding it to the Top 8? Or will an old hand return from further back in the standings to steal the limelight? Tune in all weekend long to find out!