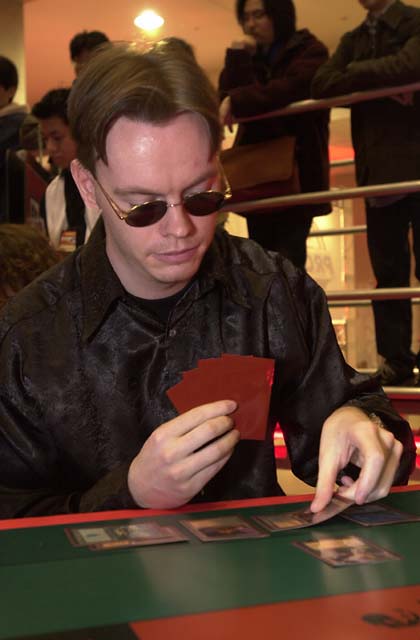 Most people, including the main person himself, were surprised when Craig Jones from Ludlow in England won 1998 Grand Prix Birmingham. Now, two years later, Craig is finally doing well on the Pro Tour. The 26-year-old Englishman had a rock-solid 6-0 record with one round left of the first day, heading into his very first Pro Tour day two. "Birmingham was a fluke," he admits. "I was good, but not THAT good."

After becoming the first Englishman to win something significant, a merit no one has copied as of today, Craig Jones slowly faded out of most people's memories. "I kept playing tournaments not making Day 2. They should have more constructed Grand Prix, and it has nothing to do with me being bad at limited," Craig laughs.

Two years ago he was the long-haired aspiring horror story writer, wearing black metal shirts and playing goblins when no one expected them. Today, Craig is still an aspiring horror story writer, but the long hair has been cut significantly shorter and the black metal shirts got too scruffy and were replaced with more "straight" clothing. And, the Brit has become a better Magic player.

"I seem to be consistent these days, I've made Top 8 of the last seven out of nine Pro Tour Qualifiers I've played in," Craig says. He didn't win one to qualify for 2001 Pro Tour Tokyo though. "I qualified on frozen ratings. I shouldn't really be here," he smiles.

The fact that Craig is doing well may stem from the fact that this is the first Pro Tour to which he has come kind of prepared. "This is the first Constructed Pro Tour where I haven't built the deck the night before," he admits. Craig teamed up with most of the other Englishmen that were qualified, or the "leftovers" of Kobrakai, the international team on which you can find Ben Ronaldson, for instance. Unable to do a lot of physical testing, Craig came up with a deck that he thought was quite good. Then he got feedback from the others, and in the end, several players chose to play his deck.

"The first deck was not a pile, it was okay. He had [Ravenous] Rats instead of Nightscape Familiars and so on. But it's mostly Craig's deck. He kept beating the rest of us so badly that we just gave up. I had other decks last night, but I said 'well, I'm gonna play it' after he was 8-0 or something. He mulliganed to five and I Probed with kicker, but he still won," Scott Wills says.

Craig's deck is dubbed UBeRaggro. It's a black and red aggressive deck with blue. Often, it will just go turn two Nightscape Familiar and turn three Blazing Specter, which put an enormous amount of pressure on an opponent. The blue is in there for Recoils, one Crosis, the Purger, Probes and a single main deck Lobotomy. Generally, the deck is based on one main thought - card advantage. "Pretty much every card is one card to take out one or more of theirs," he explains, flipping cards like Blazing Specters, Flametongue Kavu, Probe, Void, Crypt Angel and Pyre Zombie onto the table.

After six rounds, Craig was happy with his deck and his performance. "This is the first time ever I'll make the Day 2 of a Pro Tour. I've always had the wrong deck, or I've met the worst matchup - or just played badly," he grins. "In Birmingham, I just randomly turned up with a red deck that no one expected."

"Craig is known for being notoriously lucky. And that's not just me being bitter. In sanctioned matches, I'm like 0-11 against him," Scott Wills adds. Craig doesn't deny the fact that he can be incredibly lucky sometimes. However, he adds that he can also be incredibly unlucky. In Florence, he was undefeated before the last round of the first day. Then he lost, and he also lost four matches in a row the second day - the only possible way he would not make money in the tournament.

With his previous best Pro Tour result being 3-4, Craig is now hoping to make the Top 64. That's his goal. He doesn't expect to win or anything. "No. I'm not good enough. I'll make too many mistakes tomorrow. I know too well that it could all go horribly wrong and I would end up nowhere," he figures. Because Craig doesn't really trust his deck. "Sometimes it gets in the mood to screw you, and then you die quickly. But if I get a decent mana draw, then there is not much I will lose to."