Popular Magic columnist Ted Knutson is roaming the halls of the 2005 U.S. Nationals to bring you all the entertaining stories and tidbits straight from the tournament floor.

I walked up to Gadiel Szleifer first thing this morning, asking what deck he ended up with and chatting casually. About midway through the conversation, my eyes settled upon his JSS Nationals hat.

"It's Vintage," Gadiel said, "From 2000. It's in honor of the fact that this is the last year that I could have legally played in the JSS."

Compare Gadiel's hat this year with his thugged-out-yet-shockingly-adorable picture from the wayback machine. 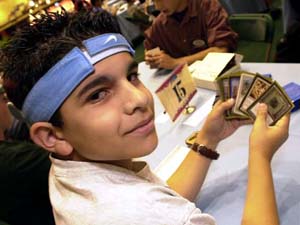 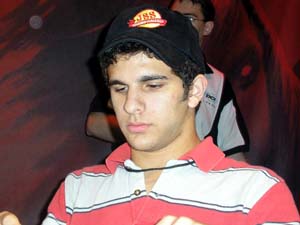 Speaking of respect, every premiere event these days seems to bring old-timers crawling out of the woodwork, including some superstars of the poker world. David Williams and Neil Reeves are in attendance this weekend, as are Brock Parker, Ben Stark, and Jordan Berkowitz - all of whom have been awesome Magic players at some point in their careers, but who now make a good chunk of their living playing 52-card decks as well.

Apparently even when you make millions of dollars, a love for the game of Magic remains a strong part of you, dragging players out of retirement and across the globe to get the game on. Brian David-Marshall was talking to Berkowitz about how much Jordan loves the game, even if he's not as deeply involved with it as he once was. Their eyes scanned the room looking for players in similar situations until Brian said, "Hey, even Hammer is here." 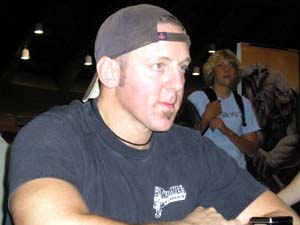 Shawn 'Hammer' Regnier was back in action this weekend.

Jordan paused for a moment and then shook his head, saying, "I have no idea who that is."

Of course, BDM was referring to Shawn "Hammer" Regnier, Pro Tour Winner, Arm-Wrestling Champion, and Hall of Fame nominee who qualified for this weekend's event via Regionals. Kids these days - they still have no respect for their elders.

In feature match action this round, Gerard Fabiano (Mono-Blue Tron) was matched up against Mark Herberholz (White Weenie), and the two players decided to "entertain" the crowd by rapping all the way through Game 1. I actually had to leave the Feature Match area for a while at that point because the unending sonic assault of awful rhymes was too much for my poor ears to withstand. The rapping stopped in Game 2, as Herberholz buckled down and rallied to even the match at one game a piece with flying beaters and two resolved Glorious Anthems. Sadly, all of that was for naught as three Sun Droplets combined with a slow draw from Mark spelled doom for the Michigander. 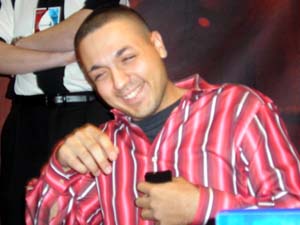 Gerard amuses himself with his rapping skills.

On the other side of the feature match area, Neil Reeves (Mono-Blue Control) squared off against Joe Crosby (Tooth and Nail). Neil won Game 1 in spite of a resolved Tooth from Crosby, courtesy of what Mike Flores noted was a minor misplay from Joe. Crosby was then completely manascrewed in Game 2 and no amount of digging with would help, giving Reeves a 2-0 win.

Perhaps the best match of the round, however, was occurring in the loser's bracket as David Williams squared off against Brock Parker. Parker had an average start for his Tooth and Nail deck, but he looked confused as Dave kept putting different colored lands into play. Williams then cast , earning a look of utter shock from Parker, before putting Zur's Weirding into play.

"What the hell is this deck?" Brock asked.

Parker cast an Oblivion Stone on his turn, but Williams stole it during his next upkeep with Confiscate and it was smooth sailing from there to a Game 1 win. The next game went all Parker's way, as an early Tooth for Sundering Titan crushed Dave's lands, sending it to a rubber game. Parker had a turn-three Iwamori off of a Mox, but Williams was able to cast a very quick Bringer of the Black Dawn, which then sought out again.

Williams used the first Ideal trigger to Confiscate Iwamori and then had to do it again during the next turn after Parker cast Creeping Mold on the first copy. Brock used his Top again and again to search for a sixth land to use his Duplicant, but Williams made sure that never happened by channeling a . Parker's last Top revealed three more Tops on top of his deck, and he extended the hand, conceding the match to Williams and his goofy deck.

Apparently Dave's deck is a homebrew based off of a Mike Long/Japanese Kamigawa Block design. When Zvi Mowshowitz was apprised of this, he apparently quipped, "Well, I guess if you finish second at the World Series of Poker, you can afford mtgsecrets.com."

Patrick Sullivan is on a bit of a roll lately. At Pro Tour-London, he made his first individual Day 2 at a Pro Tour after years of plugging away. He's received rave reviews for his writing recently, he has a solid job, and he's happily married to Kate Stavola. Here at U.S. Nationals, he kept on rolling right through the first three rounds, posting a 3-0 record in the first half of Constructed here at the event. Those three wins eclipsed his entire number of wins from Constructed last year where he posted a 2-5 record to go along with his 6-1 in Limited. BDM and I were theorizing about Patrick's winning record when BDM suddenly declared that this clearly doesn't count for anything, since Patrick is playing Red Deck Wins, a deck that he routinely tears up Extended PTQs with and one that has made a very similar transition back to Standard in the last year. I also pointed out that U.S. Nationals is a bit like a very large and slightly higher-quality PTQ, where Patrick regularly posts Top 8 appearances (one might almost say PSulli has inherited the mantel of "King of the Qualifiers" from Dave Price these days, though he abhors any comparisons between him and Price).

If Mr. Sullivan is able to come close to replicating his sterling results from last year's Limited portion (and he says that the last time he lost an 8-4 on Magic Online was about two months ago, so he knows the draft format well), he'll have a very good chance at making the Top 8 here at U.S. Nats and perhaps guaranteeing himself a trip to Worlds in Tokyo.

The feature matches for this round put two New England Pro Tour Hall of Fame nominees on display, both of whom own game stores and have been around since the early days of the Pro Tour. Shawn "Hammer" Regnier won the second Pro Tour way back in 1996. He's just wrapping up a long stint as owner Hammer's Comics and admittedly regrets how he might have to find a real job now, but can be seen attending North Eastern Grand Prix whenever his schedule allows. On the other side of the divider sits Rob Dougherty, a man who was within a whisper of being voted into the Hall on the full ballot and who still stands a decent chance of being voted in via the player's ballot. 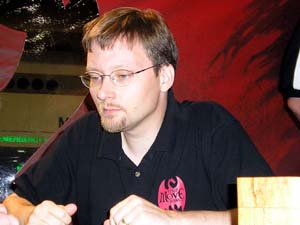 Rob Dougherty finished sixth in the Hall of Fame balloting.

Hammer's red-green deck was pitted against Mike Thompson's blue-black deck, and throughout the course of the match it became obvious that Hammer was slightly embarrassed by some of the cards in his stack (like Kashi-Tribe Warriors). Thompson's beatdown rolled right over Hammer in Game 1, but the arm-wrestler struck back in Game 2, helped in part by 12 life loss from Oni-Slaves bouncing into and out of play. While shuffling up for Game 3, Shawn explained that he was sandwiched between two other red-green decks, making his draft deck about as bad as it could possibly get. Thompson proved the point by crushing Hammer in Game 3 in spite of being stuck on three lands for a number of turns.

Dougherty's games were tight ones, as he and Shaun Mack battled fiercely over board position. Mack took the first game, and then Game 2 stalled until Roar of Jukai gave Dougherty a huge advantage, evening the score. Game 3 turned out to be mostly about Akki Avalanchers beatdown from Dougherty, as the little goblins got in for 12 points of damage before Roar of Jukai and Unchecked Growth put the game away. 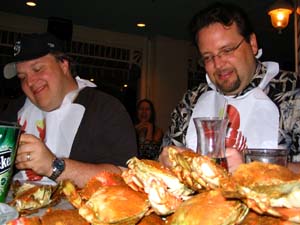 Buehler and Larabee devoured a table full of crab.

One of the things Maryland is known for is crab. Great crab. Lip-smacking, bib-wearing, get-messy-and-crack-open-a huge-plate-of-Chesapeake Bay blue crabs and eat until you are sick crab. That's exactly what a group of us did Thursday night, with Randy Buehler coming out on top in the crab-devouring battle.

The cost of blue crab has gone up quite a bit in the last few years, but Randy and Scott Larabee declared that the little pieces of succulent shellfish were clearly worth the cost. Our party was even gifted extra crabs from the table next to us where a young couple had clearly bought off more than they could chew. With Randy's help, our table of five managed to dispatch fourteen of the jumbo editions of the blue, in addition to a bunch of crab cakes and clams casino. At the end of the night, it was even worth the "Oy, I ate far too much" feeling.

I've talked many a time about my respect for Gabe Walls, the Master of Lies. The most recent tale he spun to friends and draft table opponents was that he had shipped an Umezawa's Jitte to teammate Mike Krumb sitting on his right because Krumb doesn't have enough points to be qualified for Worlds.

Now, I had already seen Krumb's deck at this point and knew the story was false, but that didn't stop people like Antonino De Rosa from believing it and the spreading the tale to the rest of the tournament field. The Italian Stallion may be one of the more gullible fellows on the Pro Tour, but you can't blame him too much because Walls truly is a master of disinformation. 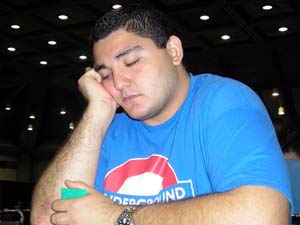 This means that table 1 Saturday will look like this:

That's a very strong table for midway through a mixed-format event, and it includes the defending U.S. champion, who insists that his squad has the best Constructed deck in the format again this year. That draft will have a major impact on which players are able to launch themselves into the Top 8 and which ones come crashing to Earth in a hail of bad cards and worse picks.

Saturday will feature three rounds of draft and four more rounds of Constructed to determine who will move on to the Top 8, and with no single player distancing himself from the pack and a number of very strong players at the top tables, it is still anyone's tournament.