Stuck behind a computer screen while the everyone else is at Magic Weekend?

Fear not! Our illustrious team of snoops, sleuths, sharks and shakers are out to bring you the latest buzz from the premier Pro Tour event of the 2006 season. As always we're inviting you to be part of the action. Are you rooting for a particular pro player and itching for an interview? Are you nursing an awesome story idea just waiting to get covered? Discuss 2006 U.S. Nationals on our message boards and post your suggestions, comments, and ideas and we'll do our best to get you the insider scoop!

Looking for articles from Friday? Check out our Day 1 Archive.

Tim Aten squared off against former teammate John Pelcak in Round 8, the first round of Coldsnap drafting. Aten was behind on the board for a bit until he got enough land to cast… Jokulmorder, and then play an Island to untap it, putting the brakes on Pelcak's offense. Pelcak was able to get rid of it before it killed him, but it cost him an entire squad of Yetis (two Ohran and one Stalking) plus a +1/+1 counter and a ping from Orcish Bloodpainter. Aten went on to win both the game and the match, stretching his record to an unexpected 6-2.

Perhaps the most amusing part of this is that Aten has another Jokulmorder in his sideboard, and had a chance at a third in the draft, but decided that three was guaranteed to be one too many.


Obviously you can't tell it from the coverage (yet), but it's freaking cold inside the Cobb Galleria here in Atlanta. I mean, sure, it's probably 95 degrees outside with a heat index capable of frying eggs on the sidewalk, but here - where players are playing and shivering reporters actually have to do work - it's cold enough to make Heidar proud. I'm actually huddling close to my laptop right now just to try and stay warm.

I tried to complain to management about the whole "hands turning blue" situation, but I was informed that the chill in the hall was "theme cold" designed to make players feel more at home when drafting Coldsnap. Unfortunately, even though the draft portion of the event has just ended, the air conditioner is still stuck on high, and I somehow left my mittens and ski parka behind. To try and make things up to folks, there's a free snow cone stand at the front of the hall, which I am not about to turn down. Yeah, I'm freezing my huevos off, but you can't turn down a free snow cone. I'll just have to eat it outside. 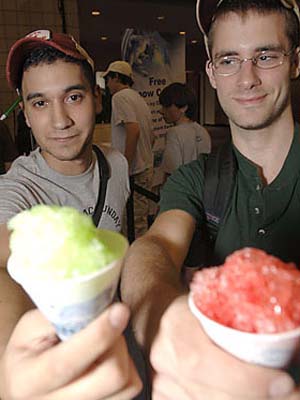 In the five flavors of mana! 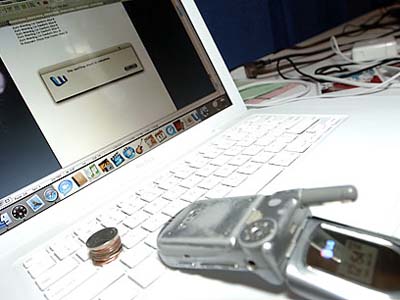 Many of you probably know Doug Beyer and John Friggin' Rizzo from their writing on magicthegathering.com and StarCityGames.com, but one person you might not have heard of is Kelly "Ladies' Man" Digges, cub reporter and event editing lackey. Kelly is a native of Champaign, Illinois and has been hired to help Events Producer Greg Collins not have to work 20-hour days at every Pro Tour.

As part of Mr. Digges's first task on the job, he was asked to add the entirety of Magic's card names to his Word spellchecker. The tricky part here is that this is actually a cleverly disguised engineering problem. Unless Kelly wanted to click his mouse button "yes" thousands of times, he needed to solve the puzzle. Like any good Goldbergian equation, the solution to this one merely required a candle burning through a string, a bowling ball on a see saw, a stack of pennies, and Kelly's cell phone.

The puzzle solved successfully, Kelly is now allowed to work on tasks with greater responsibility, like fetching writers caffeinated beverages and making certain that Rizzo doesn't slip anything too foul onto the front page. Expect to see more from him in both Kobe and Paris.


Drafting is officially over here at U.S. Nationals, and a brief look at the standings shows Ben Zoz and Luis Scott-Vargas at the head of the pack with four rounds of Constructed left. While drafting is traditionally the format that separates the men from the boys here at Nats, a bad Constructed stretch at the end will kill your Top 8 hopes just as quickly. Therefore we decided to take a look back at the Round 3 standings and match up the players who started the tournament undefeated in Constructed who are still in the Top 20 after the draft. The list is an interesting one and looks like this:

Zoz and Scott-Vargas have a full win on the field, so they will really need to take a nose-dive in order to miss the Top 8. After them, however, there is a giant clump of players at 24 and 21 points that goes all the way down to Brad Taulbee in 26th place, so anything can happen here in the final four rounds. 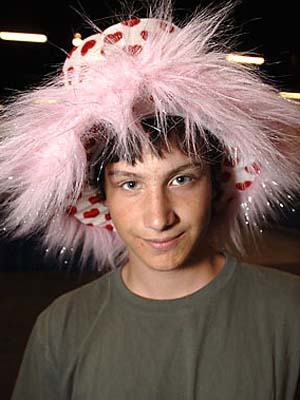 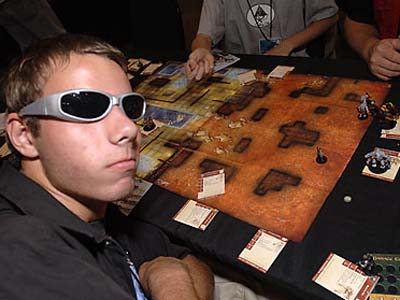 The Learn to Play area shows off D&D minis. Shades not included. 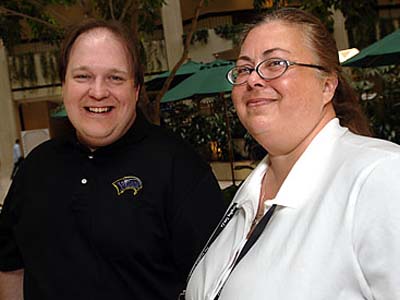 Apparently being the Director of R&D breeds mad groupies, yo. 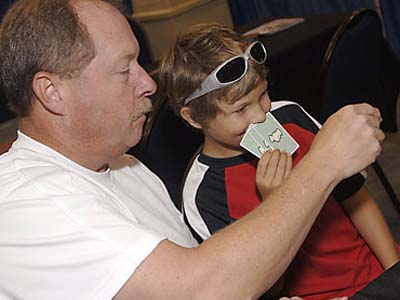 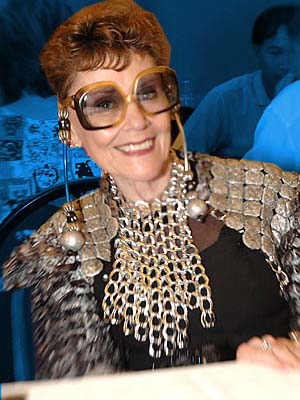 
The feature match area was one too small for this round, with three matches playing key roles in determining who gets to continue on with a shot at becoming the U.S. National Champ. Alex (John) Sittner of Utah faced Tim Aten of Bittersville in the match that did not get featured. The two players split the opening games, with Aten's Wildfire Tron taking the first and Sittner's black-white discard deck taking the second.

Both players kept their opening hands, with Sittner casting a turn-two Dark Confidant to Aten's turn-two and -three Izzet Signets. Turn-four Keiga, the Morning Star from Tim earned an ominous "this is baaad" from Sittner, but the Utah boy blew up Tim's hand a turn later with Blackmail plus Cry of Contrition, meaning that between those two cards and a Shrieking Grotesque, Aten had now discarded two Tidings and a Wildfire. Ugh. Umezawa's Jitte from Sittner earned a flag from the ref for piling on.

Compulsive Research from Aten rebuilt his hand as Sittner continued to cast threats - another Dark Confidant and Hand of Cruelty raining down from hand to board. Tim drew a Keiga to stave off some beats, but Sittner's barrage of discard was way too much to handle, especially when Okiba-Gang Shinobi snuck in to quietly garrote Tim's chances just when they started to look up. It was fitting then that the final points of damage before Aten scooped were dealt by a pair of Ravenous Rats, one of whom just happened to be wielding Umezawa's pointy stick.

The win likely gives Sittner a chance at drawing into the Top 8 in the final round, while Aten gets to drop to his knees and pray that a player at X-4 makes it - and that he's that player.