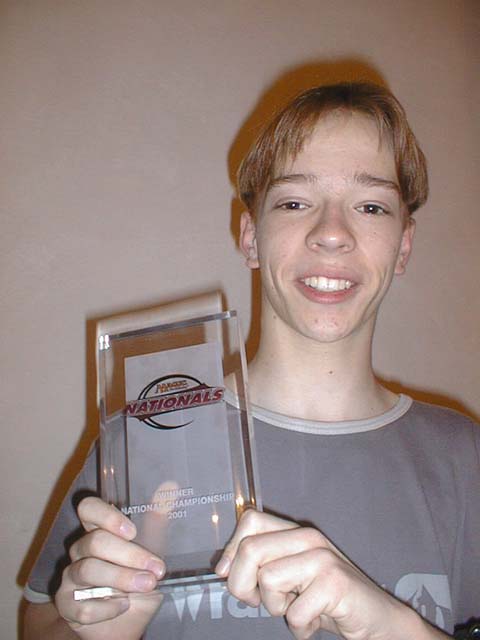 "This is just great. I don't know what to say," Daniel Zink says, just shaking his head, too overwhelmed to speak. After five games against the Magic veteran Stephan Valkyser, the 16-year-old player could bring the National Champion title home to Bochum.

The young Magic player worked his way through the swiss to enter the top 8 as the seventh seed. In the quarterfinals, he faced Patrick Mello, and he was certain that he would lose. "I playtested the matchup, and I lost against the deck most of the time. I was merely hoping to qualify for Worlds through the loser bracket," Daniel admits.

Instead, he swept against Mello, and then he took down Mark Ziegner's burn deck as well. "I think I should have lost, because it was a really bad matchup," Daniel says. Still, he won and got to play against Stephan Valkyser's rogue deck in the finals. But by then, Daniel's nerves were calmer than they had been before. After all, he was already qualified for Worlds.

Daniel had to go through four nerve-wrecking games. Then, the fifth game was somewhat an anticlimax. Valkyser mulliganed twice while Daniel got a very strong draw. "When I saw my hand, I thought that I could win it, and after he mulliganed I was sure that I would win - mulligans are really bad. I never expected to win, but I was really, really relieved when it was over," he says.

Daniel admits that it is hard to believe that he is actually the National Champion. "I don't know when I'll realize it. I think it will take some time," he says, grinning from ear to ear. Now, he'll represent Germany in the 2001 Worlds Team Championship along with Stephan Valkyser and Mark Ziegner. "I don't know Mark, but Stephan is a really good player. I think the National Team is good. I don't know if we can win, but I think we'll do well," he predicts.