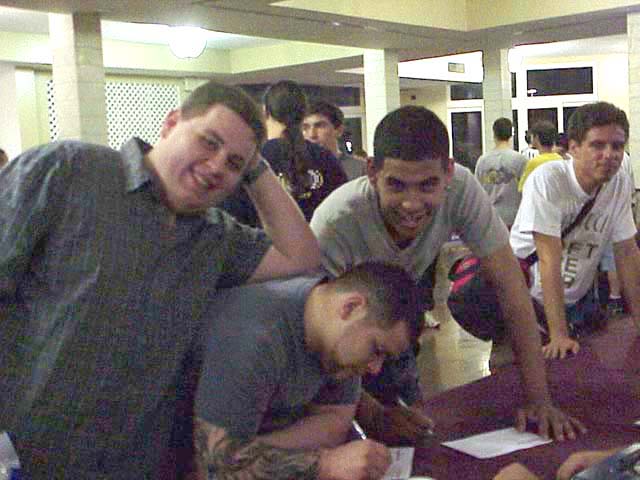 Dave Williams is somewhere in this picture

Dave Williams builds sealed decks in Fast Forward. His hands moved light lightning, first splitting the cards by color and set, double-checking the registration. That done, he scooped up the whole mess and eliminated nearly a third of his pool in the second pass. These were the cards he didn't want to have to play.

The remainder he split again by color in five stacks with allied pairs next to each other. The gold cards he put above and between these stacks, giving him an easy view of where his strengths lay. Red was very weak and he cut it immediately. The bulk of his good cards were in Blue and White, so laid them out, putting the rest to the side for the time being.

This gave him about fifteen cards that he definitely wanted, with strong air support from Angel of Mercy and a pair of Griffins and good ground stall from Samite Pilgrim, Shoreline Raider and Galina's Knight. With this core in place he turned his attention to his splash color. Black was the obvious choice. It gave him full access to Probe, another flier (Volcano Imp), as well as removal from Dromar's Charm, Agonizing Demise, Exotic Curse and Planeswalker's Scorn.

Counting up this build, he found only twenty-one cards. His options in the cut cards were unappealing. He tried switching the black for green, but his green cards were nothing spectacular. He ended up looking at twenty-three mediocre cards. That set his mind on U/W/b.

Digging into the chaff he pulled out an extra Stormscape Familiar and a Prison Barricade. He thought briefly about swapping a Familiar for a Prohibit, but decided against it. He almost splashed Phyrexian Bloodstock before he realized that it could end up banishing one of his many white creatures.

The whole process took fifteen minutes. This is his final decklist.

Overall, Dave was happy with his deck, but felt like it was missing a strong Rare finisher. "It's good," says Williams "but it could use a Dromar or an Armored Guardian. Something like that."