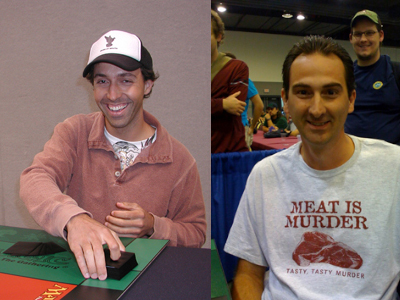 Day One of U.S. Nationals is in the books and Colorado-based Brett Piazza and Texan-transplant Mark Hendrickson are the last two undefeated players standing. Brett is an up-and-coming Pro who seems poised to take his game to next stage -- perhaps a Sunday stage? He will have to square off with Pro Tour veteran Mark Hendrickson tomorrow to get one round closer to that goal. All Mark has been doing since Thursday is win though. Finding himself unqualified for Nats for the first time in the last several years, Mark qualified in a Grinder Thursday with a rogue creatureless red-white control deck that did not fail him through four rounds on Friday.

Players will have another three rounds of Alara Block draft in the morning tomorrow and a four round afternoon of Standard to determine the Top 8 that will fight on Sunday for three spots on the US National team.

“Sam’s a ridiculous drafter, so at least we’re playing the right format.” Tim Landale said before his opponent, Sam Stein sat down to the match. With the first four rounds of play on Friday being Standard, Tim had dodged a bullet; he’d be playing against Sam in a Constructed format, allegedly his weakest area of play. Considering he had a Pro Tour Top 8 at Valencia playing Constructed, it was some “weak spot.” Landale, of course, was no slouch himself, having won a Grand Prix in 2008 and generally being considered one of the top Americans on the East Coast Magic scene.

Second-turn Bitterblossom for Sam Stein was the first play of the game, but it was quickly mirrored as young Tim Landale cast one of the tribal enchantments on his own turn. The two went back and forth trading Faerie tokens, until Landale cast a Peppersmoke targeting a Faerie Rogue on his opponent’s side of the board. That merited Cryptic Command from Stein, not to counter, but to bounce his opponent’s Bitterblossom, stranding him with no Faeries. Tim was forced to re-cast the enchantment. 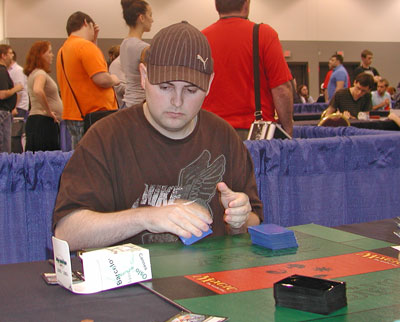 Pro Tour Top 8er Sam Stein returns to the feature match arena at U.S. Nationals. Sam was next up with a play, trying for a Mistbind Clique during his opponent’s upkeep, but Landale was ready with a second Peppersmoke. That knocked out Sam’s only Faerie token, forcing him to champion his Bitterblossom to land his 4/4. The Clique got its beat on, dropping Tim to 14. Both players were a touch mana light at four each headed to the midgame, but Landale was in worse shape as he had two Mutavaults, a Swamp, and an Island to his opponent’s bevy of blue and black producing duals. The lack of access to colored mana could prove to be Tim’s undoing.

Essence Scatter countered a Vendilion Clique from Sam Stein, but the quiet Nevada resident kept sending with his Mistbind Clique, eating a Faerie Rogue from his opponent’s Bitterblossom each turn. When he cast Scion of Oona, Tim Landale was forced to counter with Broken Ambitions, even winning the clash.

A second Mistbind Clique hit the table, this time for Tim Landale, but Stein was ready for it with a Broken Ambitions. Sam had a more threatening creature on the table, but he was still unable to get in for damage each turn as his opponent banked a Faerie Rogue from Bitterblossom to chump block the 4/4 Mistbind Clique. That meant Sam would need to find a removal spell or another attacker in order to get through each turn, or risk losing the game to his opponent’s clock. When Stein attacked with his Mistbind Clique again, his opponent repeated his play from the following turn, blocking with a Faerie token then attempting to champion the 1/1 with a Mistbind Clique. Stein was ready again with a second Broken Ambitions.

Stein finally made his move, activating a Mutavault and attacking with both the 2/2 and his Mistbind Clique. The attack made it through, with Landale falling to 7, then 6 on his upkeep. If Sam could keep the tempo of the game exactly as it was going, he would win with a new life lead of 4. Landale tried to gain some ground by casting Vendilion Clique, but the 3/1 met its demise at the hands of a Spellstutter Sprite from Stein. Tim fell to 5 on his upkeep, and his opponent leaned in to verify the life total. He was clearly preparing to move in for lethal.

Peppersmoke from Sam Stein was countered by Scion of Oona from Tim Landale, but the 1/1 Lord forced Tim to tap very low. When Stein revealed a Cryptic Command on his own turn to tap Tim’s team and then attack for lethal, the two players moved to the second game. 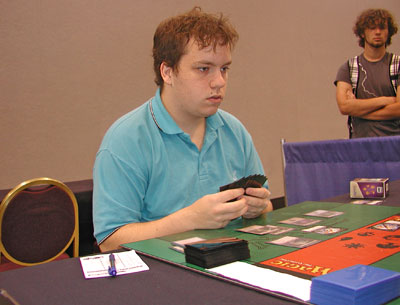 Grand Prix champion Tim Landale tries to return to the champion’s throne. Sam Stein opened with a shocker in the second game: Mutavault, go, then no lands! His opponent quickly took advantage, activating a Mutavault of his own and bashing for 2. Stein slowly pulled a card from the top of his library, hoping for a second land, but whiffed and was forced to discard. The following turn Landale had a surprise for his opponent during the draw step, casting Vendilion Clique. The hand he saw: double Peppersmoke, double Broken Ambitions, Cryptic Command, Bitterblossom, and Scion of Oona. “I’d really like to take your land,” Landale opined dryly.

Landale opted to take nothing, for fear of helping his opponent draw even more lands, but had to watch as Sam landed Bitterblossom. Vendilion Clique and Mutavault attacked Stein to 13, and he fell to 12 on his upkeep from the Bitterblossom. Sam missed yet another land drop, and when he tried to Peppersmoke his opponent’s Vendilion Clique, Landale countered with Broken Ambitions. That was enough for Stein, who scooped his cards up to save time for the third game in their match.

Both players kept their opening hands, and Sam Stein kicked things off with a Bitterblossom on his second turn. Just as in the first game, Landale echoed the play himself. Stein changed up the tempo, however, doubling down on the enchantment and promising to make the game a race one way or another. Either he’d get through with his ever increasing horde of Faeries, or die to his own Bitterblossoms.

An all-in attack from Sam Stein saw Mistbind Clique, Mutavault, and triple Faerie Rogue head to the red zone. Landale considered his options carefully before chumping the 4/4 and attempting an Agony Warp. The Warp was countered, Landale fell to 10, then 9 on his upkeep, and the game looked firmly in the hand of Sam Stein.

Landale untapped and cast Peppersmoke targeting a Spellstutter Sprite from his opponent. When the cantrip failed to yield Landale his fourth land, he shook his head in frustration. “Good game,” he said, extending his hand in defeat rather than stumble along in an attempt to play on while handicapped.

While 230 players shuffled and snapped in Round 2 of the main event, I headed over to the dealers’ area for some clues about what spells the competitors might be slinging. I talked to dealers from Lotus Vault, Troll & Toad, and Strike Zone and asked them what they’d been seeing. Were there any surprise hot sellers or last-minute secret tech?

The answer, unusually, was “not really,” but a few tantalizing details emerged The Time Sieve / Open the Vaults deck from Finland Nationals had been briefly popular on Thursday before the Grinders (and won at least one of them), but this morning it had died down. With everyone talking about the Big Four—Kithkin, Faeries, Elves, and Five-Color Control—it’ll be interesting to see if the artifact-based combo deck makes a mark.

One tidbit I heard from multiple dealers—Warren Weirding was a hot item this morning. At first I thought this might mean there was some kind of Goblin deck on the loose, but the reality was subtler: the Morningtide uncommon is picking up speed as a sideboard option to help Faeries beat the dreaded Great Sable Stag out of Five-Color Control, as seen at last weekend’s Japan Nationals.

Meanwhile, players are prepping for the Vintage tournament later in the weekend. Mystic Remora remains a solid player in the metagame, and there was one piece of cryptic last-minute tech in Toils of Night and Day. Based on my limited knowledge of the format, I have visions of untapping Time Vault and Tolarian Academy, which seems ... pretty good, I guess.

The other interesting story for Standard was Wake Thrasher, which had started selling briskly online over the weekend and continued doing so here at the event. The Merfolk—another Morningtide special—was one of the big winners in the recent Magic 2010 rules changes. With mana burn gone the way of the damage prevention window, it’s easy and painless to tap out and power up Wake Thrasher. And rumor has it there’s a Merfolk deck to house the Thrasher, complete with Merrow Reejerey and Merfolk Sovereign to pump it up further and make it unblockable. 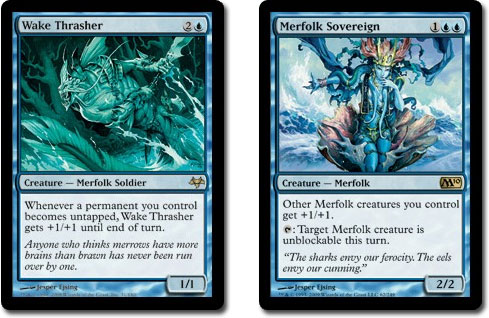 It is a rite of passage every year; hundreds of Magic players descend on National Championships unqualified for the main event but with a single goal in mind: get there by way of a Grinder. What are the Grinders? A series of single elimination events that fire around the clock the day prior to a National Championships. At U.S. Nationals this weekend, that meant 401 players competed in 29 events for a last chance at playing this weekend. Here are the winners of the Standard events: