As Head Judge Jason Ness conducted the players meeting, I couldn't help but notice some interesting faces in the crowd: 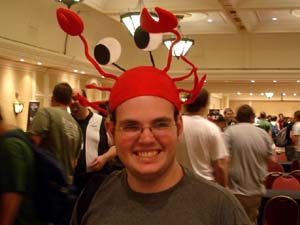 Gadiel who? Lobster Boy is in attendance!


Notable by their absences are Gerard Fabiano and John Fiorillo. Gerard purchased their plane tickets for $600 each this week, then managed to direct the pair to the wrong airport. Not an easy way to follow up a tough week for John. Sympathies go out to him from the Seven Kings.

Richie Hoaen, meanwhile, had a rough trip up, making the drive with three fellow Ontario natives. His car mates refused to pay tolls, citing unnecessary expense, and as a result chose to drive over Lake Michigan instead of under, adding four hours to their trip. I haven't been in Ontario in ten days, but when I was, gas wasn't free. 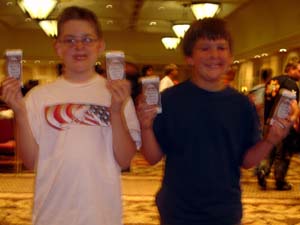 With the pros back in their beds, we have a few rounds to look for some of the smaller stories. Each TO seems to find a way to combine the need to use up old product and run a fun promotional tourney, and this weekend's no exception. Dreamer's Comics and Cards is hosting a 32-man tournament tomorrow whose details are far too complex to go into, but the top 8 will include the drafting of eight Antiquities boosters.

This got me to thinking about just how long ago Antiquities was printed, which led me to think about how old I was in relation to most gamers. This in turn got me onto the topic of young gamers, two of which I found who are approximately the same age as the boosters in question.

Brian Hollington, 11 and Andrew Solomonson, 10, have been around for about as long as Mishra's Workshop. They drove up from Plymouth, Minnesota with Brian's father, Scott, and despite losing their respective first round matches, they allowed us to subject them to the accompanying picture. Brian actually taught Scott how to play, and they now buy a case of each new set as it is released.

Antiquities was printed in 1994. 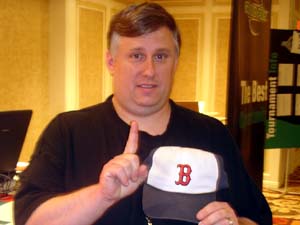 Head Judge shadow Mike Guptil asked that I point out the Red Sox beat the Yankees 17-1 yesterday. He also wanted to give a shout out to Ben Bleiweiss, adding "HAHAHAHAHA". 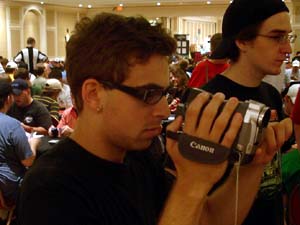 While cameras and camcorders aren't entirely uncommon at the Pro Tour, you can't help but notice when someone's filming constantly at a Midwestern Grand Prix. Evan Stern, a 21-year-old film student at the University of Minnesota, is here doing a documentary as a major requirement.

The subject of his film? The tourney journey of three players: Powerhouse Gadiel Szleifer, character Mark Zajdner and local Steve Simon. The idea is to show the seriousness that players approach tournaments with while recognizing the capacity for fun.

"I saw Spellbound a few days ago" Stern noted, remarking on the similarities between the Magic and Spelling Bee communities. "It's pretty funny to watch, but you can't help but notice how seriously the participants take their work." 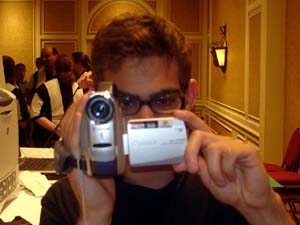 Life on both sides of the camera.

A former mtg'er, Stern put the spells aside in favor of his college studies, but still has a lot of friends who play the game. That's how he found his subjects. He wanted one pro, one local celeb and one 'nobody'. For the pro, he originally wanted fellow filmmaker Jeff Cunningham, but Ffej didn't make the trip.

"Gadiel and I have a lot of mutual friends and we roomed together in Atlanta, so after Philly, he was kind of a natural."

Evan has high hopes for Gadiel in the tournament.

When it came to the local choice, Stern first approached Gerry Thompson, who turned him down presumably because of the obvious distractions the endeavor would impose. His next consideration was John Pelcak, but he deemed Pelcak too reserved for the camera. He finally landed on Simon as his choice. 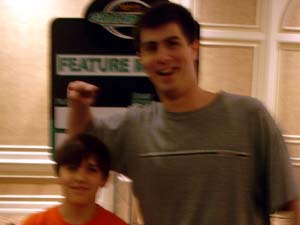 Scrubby Z and an anxious victim.

With the tournament fast approaching, Evan hadn't found a 'nobody' for the third role, so he made an abrupt change in direction, deciding instead to go with Torontonian Mark Zajdner. Spastic, loud and always at the center of a pile of gamer hangers-on, Mark's personality is a good fit for the camera, which he seems to be constantly searching out.

We'll be setting the subjects up in feature matches throughout the weekend in order to help Evan out. In round three, Zajdner was the obvious choice: a natural showman, 'Scrubby Z' had two byes, considered a blessing for most but a bane for those who have previously had the three bye benefit. Despite his fears about losing to Shawn Rudd, his diminutive opponent, Zajdner's black-green base deck managed to pull that one out. 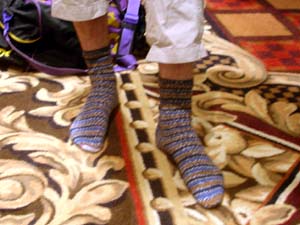 Noah Weil asked that I send a shout out to his girlfriend Brianna for knitting his socks This is said shout.

After an exhaustive count, I have approximate deck totals in today's field. With so many four- and five-color decklists melding into one another, classification was pretty tough, but here's a rough look at what's being played:

For months now, Umezawa's Jitte has been inspiring complaints from players the world over. Cries over the decks it destroys and its effect on the game have echoed through the community, but its role in defining the format and legendary status have left it impotent by comparison to the new favorite.

While the complaints over Jitte were yelled from the mountaintops, a debate of a different kind was being argued across the 'net. Sensei's Divining Top was called everything from useless to broken. Now, the consensus is the latter.

"I think top is the best card in the format", remarked Mark Herberholz while watching Gabe Walls and Gerry Thompson battle it out. "TOP!" yelled Walls, as Thompson's toy tore him a new orifice. Gadiel Szleifer and a host of others agreed, thanks in part to Jitte chasing the decks it destroys away.

"I still think it's Jitte," remarked Antonino De Rosa. "It's just such a powerful engine."

The only pro I spoke to said it was neither was Richie Hoaen. His immediate answer was Top, but after further consideration he changed his answer to Sakura-Tribe Elder, a reflection on how powerful mana acceleration and diversification is in a format where half the field if playing four or more colors. 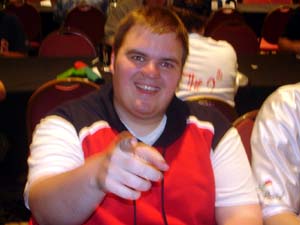 Gerry Thompson vs. Gabe Walls seemed like a natural feature match. Thompson is the local kid who made good, Walls the seasoned Pro who arrived from Las Vegas last night fresh off an 86th place finish at the World Series of Poker. Walls (who made $91K) came to the tournament with little enough preparation that he needed to borrow cards and a decklist. He got them from Thompson.

The two sat down to play with Walls, sporting Thompson's cards, busted his deck out, revealing it to be sleeveless. Realizing that his cards were being destroyed, Gerry 'made' Gabe sleeve the deck, handing him a fresh pack of protectors. After a few verbal jabs on either side of the table, they got underway, with Gerry smashing Gabe 2-0 on the strength of Tops drawn vs. no Tops drawn. Kodama or the North Tree proved to be the finisher. 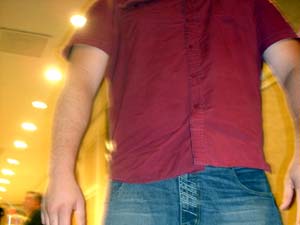 In ten years in Magic, I've seen many players celebrated. Olle Rade was hailed as the first Pro Tour superstar. Finkel and Budde were showered with praise as the best players of their respective eras. Zvi was the deckbuilding genius, Jamie Wakefield the people's hero…the list goes on, but none of their celebrity compares to that I've witnessed this weekend.

I arrived last night at around 7 PM and since then have received no fewer than seventy requests for a Ken Bearl feature match. Bearl, best known for dragging himself up Kilimanjaro with one hand and curing the black plague, recently returned from settling the Middle East dispute in time to attend the GP this weekend. Known throughout the community for skipping Pro Tours in favor of spending time with orphans, the 8'3" Bearl, accompanied by his blue ox, Babe, is smashing all comers en route to the much anticipated feature match. With Rosario Dawson at home cheering him on, can he possibly fail? Only time will tell. 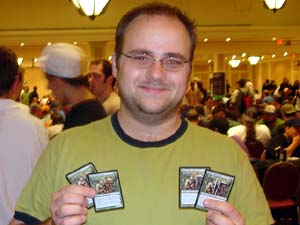 The title is misleading. Adam Smith was a political philosopher who wrote the title document, but the name is shared by a player who is here today. While the latter Smith's contributions may not be as well known, one cannot deny they're equally important.

Smith (the second) came here to play today with four unusually attired Sakura-Tribe Elders in tow. Using only the finest of tools, he decorated each to look like the four Teenage Mutant Ninja Turtles: Donatello, Leonardo, Michelangelo and Raphael. "I remember attending the last GP Minneapolis and seeing another guy who'd done some similar stuff. It got me to thinking about doing these.

While he's decorated other cards in the past, none have drawn the attention today's editions have. "I'd never thought about selling them, but everyone seems to really like them. I may have to start doing more of them." It seems like the key is in the strength of the cards in question. 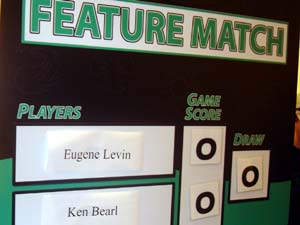 The feature pit says it all.

Round after round, Ken Bearl won. Round after round, the feature match requests poured in. Bearl, an ammunition manufacturer, proud of his donation of billions to Goodwill, fresh off a tour with U2, Wimbledon champion and possessor of Beyonce's heart, entered round 8 with a 7-0 record. His prior two constructed day 1 records: 8-0 and 8-0. Men stare in awe, women swoon, and Eugene Levin was all that stood in his way.

Levin's no slouch himself. At 7-0, he was obviously on a pretty good run, but he had to admit he was intimidated. "This is the epitome of excitement!" was yelled from the crowd. Rylan Klatt, one of many Bearl barns, was heard saying, "This is the highlight of my day", despite playing the tournament himself. The crowd was the largest the feature area had seen by three times. An event within an event. 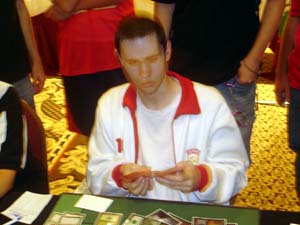 As big as the Bearl story is, the match up may be a bigger one. With Eugene's Heartbeat vs. Bearl's black-green, the story of the tournament was the dominance of green-based control decks that were build to beat the White Weenie hordes. While the one- and two-loss tables were filled with Hounds and their ilk, the top tables were a constant clashing of control decks. Green seems to be the order of the day, despite a full quarter of the field playing Plains.

Sadly, the match was anti-climactic. Bearl kept a substandard draw and Levin drew two Cranial Extractions Game 1, and drew into a massive mana clump Game 2 that maintained itself despite Levin playing Extraction with Bearl's Sensei's Divining top in play. Ken still behaved like a gentleman: he shook his opponent's hand, kissed a few babies, threw money to the crowd and finally climbed into his Lexus for the drive home: tomorrow's another day.