"Local Players to Watch" is a common feature in the coverage at Grand Prix outside of North America, which some of us reporters are very happy to use. Usually, there are one or two players who have made some sort of appearance at the Pro Tour or other Grand Prix, and then a long list of obscure names that no one outside of their home country has ever heard about, except maybe for some of the most hardcore Magic fan boys. A few words are then written about each of these players, like how they won the National Championship a few years back, or how they qualified four times for the Pro Tour. To illustrate, let me repeat the names of the players featured this way at GP Barcelona: 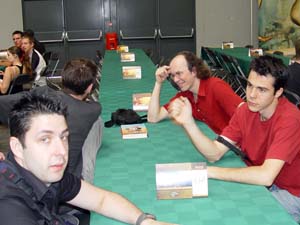 A rare sight at high-level events these days: Nicolas Labarre

In France, things are a bit different. Here are the names I might choose for a feature like this:

Quite impressive, isn't it? I will leave the descriptions of their accomplishments as an exercise to the reader. 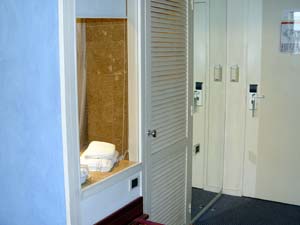 The French are extremely social people

After many years of European cooperation, the different countries have lost a lot of their individuality. The languages are obviously different, but apart from that, you can often only distinguish the cultures by small things. Apparently in France, people really, really hate it when they have to interrupt a nice conversation because one of them has to use the bathroom. At our hotel, the Capoul at the Place du President Wilson, they have figured out a way to solve this immense problem: In the wall between the bedroom and the bathroom, there is a big window, and the door between the two rooms isn't solid, but has lots of room for air and conversational (or other) noises to pass freely. I hope my room mate will have some interesting stories to tell... 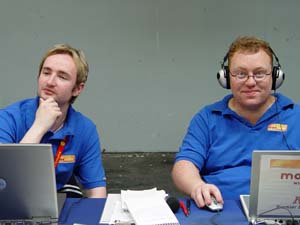 David Sutcliffe and Richard Hagon, trying to come up with the silliest pun possible.

Once again, Richard Hagon and David Sutcliffe of Moxradio will be doing free audio coverage of the Grand Prix for the blind, the lazy, and the fans of English humor. You can read more about them on their website, or in Hanno Terbuyken's article in the GP Torino coverage. 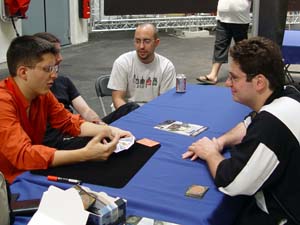 At most European Grand Prix these days, the organizers have to prepare for two tournaments, as they can never know in advance whether there will be more or less than 800 players. So when only 674 people show up, we suddenly have a surplus of judges. They then use the extra time for seminars. Usually, one of the more experienced judges will talk about an issue like table judging or answering judge calls to some of the newer ones, but sometimes guest speakers are invited.

This time, Jorge Luengo Tabernero of the Spanish magazine Serra will be giving lectures on cheating, and of course, how to spot cheaters. He has been training as a magician since he was four years old - more than 18 years ago. Now he studies to become an engineer, but his true passion is still magic."I just like to make people happy," he says. "And everybody can pretend to be a doctor or a teacher - but when I tell people I'm a magician, I can actually prove it to them in five minutes..." He won an award this year for performing magic especially for the blind - something I cannot even imagine how to do. 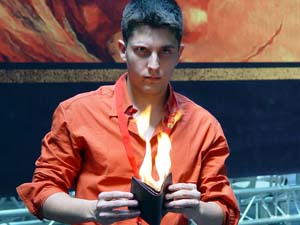 When it comes to catching cheaters, sometimes it is best to fight fire with fire

He has been playing Magic since revised, but only plays a couple times a year, when the Grand Prix circuit stops in Spain or Portugal. All the time, people ask him whether he uses his magic for Magic - but he says he only uses it to spot other people who use it. "If I was cheating to win money, I would just go to the casino instead. I play Magic for the challenge - a win is worthless if you don't deserve it. If I do a trick and people are happy and my mom is proud or my girlfriend is proud, that's when I am happy as well." 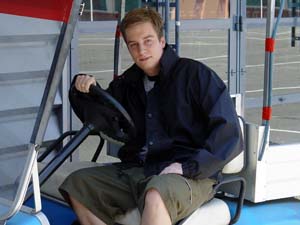 Having good ideas at the European Grand Prix really pays off. Geoffrey Siron suggested some improvements to the gunslinging system used back at Grand Prix Torino. Now, at Grand Prix Toulouse, more efficient crowd control will be used, and a new challenge will be offered to the players: Defeat all of the gunslinging pros, and win cool merchandise in addition to the booster prizes. For his efforts, Geoffrey got a Magic rain coat - not really essential in this weather, but it will definitely come in handy later this year. So, if you have good ideas on how to improve the Grand Prix, look for the big orange box and let us know! 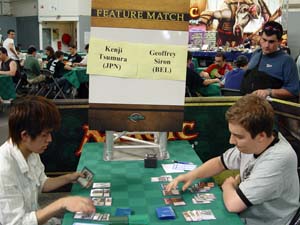 The players chose to determine starting rights by playing a game of the Japanese Jan Ken Pon - also known as Rock-Paper-Scissors. Kenji's Rock beat Geoffrey's Scissors, and he decided to play last - a decision that proved to be wise when he had to mulligan once. Kenji was a little shy on mana, and Geoffrey took advantage of that with Wrecking Ball on Kenji's lone Forest, leaving him with only two Plains. Geoffery's Ragamuffyn then got a Galvanic Arc to take care of Benevolent Ancestor, while Steamcore Weird handled Azorius Guildmage. Kenji was left with no creatures, while Geoffrey played one each turn, and the first game was soon over.

The first plays in Game 2 were again Ragamuffyn for Geoffrey and Benevolent Ancestor for Kenji, but this time the Japanese didn't want to block the Muffin, so the wall lived. Geoffrey then seemed to gain the upper hand with Blind Hunter and Steamcore Weird on Mistral Charger, but Moldervine Cloak on Bramble Elemental quickly changed that impression. Geoffrey got in a few more hits with Blind Hunter, but lost the rest of his team to chump blocks and Faith's Fetters. He topdecked a Wrecking Ball for the Bramble Elemental and then had Clinging Darkness when Kenji Cloak'ed up a Saproling. Indentured Oaf and Vedalken Dismisser provided some much-needed offense for him, while Kenji was desperately trying to deal the last few points of damage. He got Geoffrey down to two with a Blind Hunter of his own, but he died before he could attack for the win. 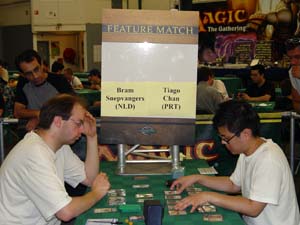 Both players had reasonable draws, and they started building their armies, while dealing only tiny amounts of damage to each other. Bram got Mistral Charger, Selesnya Guildmage, and Helium Squirter, while Tiago showed Boros Guildmage, Benevolent Ancestor, and Divebomber Griffin. Tiago's Flame Fusillade dealt with all of Bram's creatures, and the game looked like it might be over there and then. But Bram presented one of his bombs, Debtor's Knell, and tried to build up a defense while Tiago got to beat him down. Scion of the Wild interestingly enough proved to be very good with Knell and Selesnya Guildmage, and soon is was so big that Tiago couldn't attack any more. With Bram producing three creatures per turn, the game soon finished in his favor.

Mulligans were hard on Tiago in Game 2, and he had to play with two cards less. The game started with a little mana-fixing, with Farseek for Tiago and Civic Wayfinder for Bram. Bram followed up with Veteran Armorer, Selesnya Guildmage, and Helium Squirter, which were matched by Courier Hawk, Conclave Equenaut, and Tolsimir Wolfblood. After that, it really showed that Bram had two cards more, as both players had the same amount of land, and Bram kept momentum by trading one for one again and again, while dealing a little damage every turn. A Debtor's Knell then sealed the deal, as the card advantage proved too strong for Tiago to overcome. 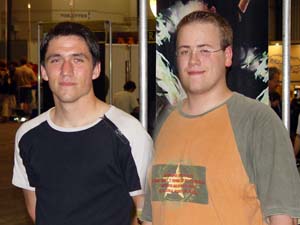 At Grand Prix Torino, Dennis Grudowski from Germany won the trip to Toulouse. It wasn't the first time he won something at a Grand Prix this year: He had made top 8 in Dortmund back in February.
The winner today is Florian Lavandier from Bordeaux. He is playing in his first Grand Prix ever, and is already looking forward to his second one, Grand Prix Malmö, which he will attend for free thanks to the Wizards.

A lot of other prizes are given out as well, anything from T-Shirts to Side-event vouchers. So next time you visit a Grand Prix, make sure to join!

Both players had already gone through the pregame-motions when their feature match was announced, so they came to the table with shuffled decks and could start playing the second they sat down. 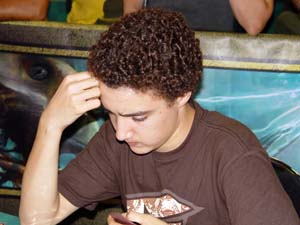 The Nuij can't get 'Catch Scratch Fever' out of his head

Savin's strategy was simple: Play as many creatures as possible, and throw all removal at Nuijten's monster's as soon as they come into play. It worked quite well for him, he got Nuijten down to eight life, and had an advantage on the board. But then the Dutchman started laughing right after his draw phase, and a Hex later, Savin's side of the board was empty, and he was facing down three of Nuijten's minions. He still had Dimir House Guard in reserve on his hand, and he could dredge Shambling Shell, but Flash Conscription and Ostiary Thrull took care of those problems, so Savin had to concede the game.

Nujten started slow in Game 2, with Mourning Thrull and Stinkweed Imp, while Savin built up quite an offense. Nuijten had to Hex early, targeting two of is own creatures as well as a Tattered Drake, so it was not the devastating blow as in Game 1. Julien then played defense for a while, even missing a few favorable damage trades. When he reached nine mana, it became clear why: Blazing Archon hit the table, essentially acting as Platinum Angel at this point. Nuijten now started attacking with his more or less unblockable creatures like Stinkweed Imp and Guardian of the Guildpact, and although Savin got Ragamuffyn going, there was just no way to get rid of the Archon, so Nuijten took the game and the match. 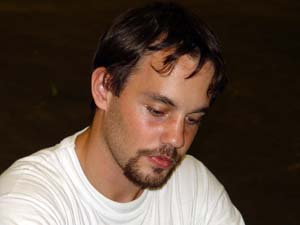 Going into the last round, it was hard to tell who would make it or and who wouldn't. 19 points would be enough for sure, and about a third of the people with 18 points would be in as well. Although many pros sat at 18 points before the round, all of them chose to play, maximizing their chances for top 8 in case of a win, and hoping for good tie-breakers in case of a loss. Ruud Warmenhoven played his friend Frank Karsten, and although both wanted to avoid the draw, they got it in the end, as they ran out of time. Guillaume Wafo-Tapa beat fellow Frenchman Jean-Baptiste Gouesse, and sits at place 10 in the standings with 21 points. Julien Nuijten and Kenji Tsumura also have 21 points, after beating Rüdiger Klings (Nuijten) and Christophe Peyronnel (Tsumura.) Antoine Ruel lost his last round against Dimitre Kostadinov, but still advanced thanks to three-bye enhanced tie-breakers. Pros we will not see tomorrow are Maximilian Bracht, Jelger Wiegersma, and Aaron Brackmann, who all failed to win their last round. Already qualified before round 8 were Olivier Ruel, Rapahel Levy, Shuuhei Nakamura, and Bram Snepvangers.