If you're French, it's hard to make a name for yourself when you already have Hall of Famers like Antoine and Olivier Ruel, Raphael Levy, and Gabriel Nassif to contend with. In Brazil, there's a similar situation. While almost everyone has heard of the Big Three – Paulo Vitor Damo da Rosa, Carlos Romao, and Willy Edel – there are a stack of talented players waiting to get their chance in the spotlight.

While we won't know which of them will seize the opportunity over the next two days until sometime late Sunday, we can do a spot of crystal ball-gazing, and offer you a few players who might be in the shake-up down the stretch:

Allison Abe has been riding high in the global rankings table for several years, but hasn't taken advantage of his Pro Tour invite until Worlds in Rome last year. His breakout performance came just a few weeks ago, when he reached the semi final of Grand Prix Gothenburg.

Aristides Camara was the 'third man' alongside Carlos Romao and Paulo Vitor Damo da Rosa in the National Team that so narrowly missed out on Sunday action at Worlds in Rome 2009.

Vagner Casatti has four Pro Tours to his name, with his most notable achievement being part of the National Team that so nearly won the whole thing on US soil in Memphis 2008, before eventually finishing third overall.

Rafael Coqueiro made his Pro Tour debut in Atlanta 2004, a team event, and has made half a dozen appearances on Tour. His standout to date was when finishing inside the top 32 at Worlds in Rome last year.

Like Vagner Casatti, Luis Guilherme de Michielli was part of the 2008 squad in Memphis. He paced the team at that event, finishing a hugely creditable 16th. With six Pro Tours in the last two years, he's someone to watch this weekend.

Jonathan Melamed opened his Pro Tour accound at Worlds 2006 in Paris, and came perilously close to the Top 8 at Pro Tour Austin last year, eventually finishing in 13th place, with a penultimate round loss to Hunter Burton eliminating him from contention.

Guilherme Medeiros Merjan began the last round of Pro Tour San Juan inside the top 8, needing a win in the final round to crack Sunday action. His final round opponent? Paulo Vitor Damo da Rosa. It was an epic encounter, with Paulo fought right to the wire. In the end, of course, it was the eventual winner who advanced, while Merjan had to content himself with a heartbreaking 14th place.

Pedro Motta has played at five Pro Tours, and four of those were World Championships. Those events took him to Sydney in 2002, Berlin in 2003, San Francisco in 2004, and New York in 2007.

Celso Zampere Junior has double digit appearances on the Pro Tour. Undoubtedly his crowning moment to date came when teaming up with fellow standouts Willy Edel and Paulo Vitor Damo da Rosa to finish just one match short of the title at Pro Tour Charleston in 2006. 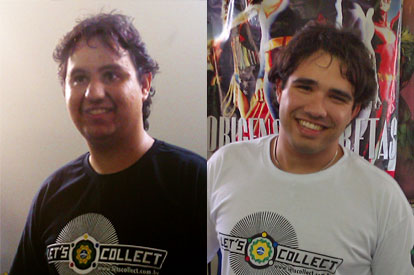 Also looking to make a run at the Nationals Team are Magic Online standouts Eduardo Vieira and Carlos Alexandre dos Santos. These two currently head the Magic Online Player of the Year Race. While Vieira was already qualified for Nationals, dos Santos – or Batutinha as he is known online – had to try to get through Grinders to reach the start line. You can read about his Nationals Friday on this very website. It's quite a tale...

And finally, we know that there are stars just waiting to be discovered. Here's every single player that's made it to round one of Brazilian Nationals 2010. Good luck to them all! 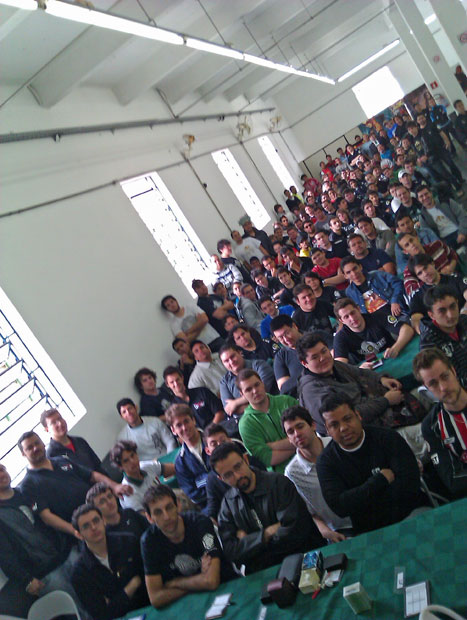 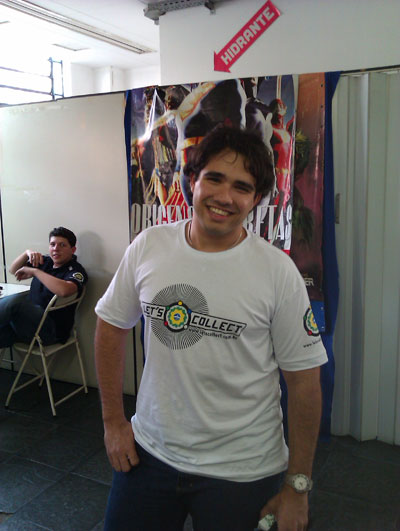 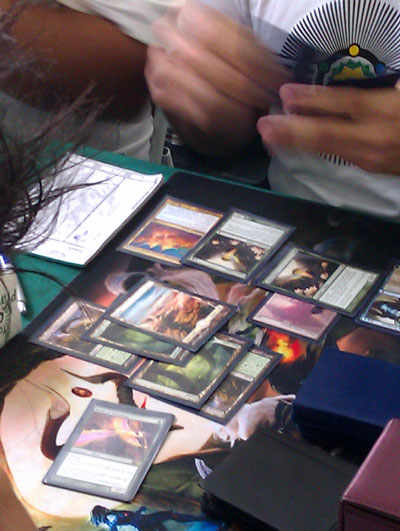 Yes, that's a Sovereigns of Lost Alara, and a Mythic Conscription, and yes, Batutinha won that one. But he didn't win the match. In round two, he was finished. Still, there's a reason they call them Grinders... 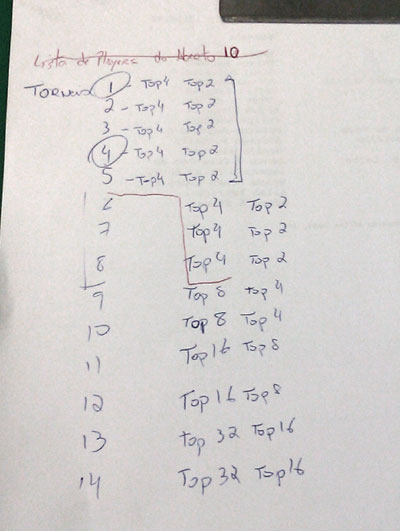 As you can see, fourteen Grinders took place during Friday action. Five of them were ready to go as soon as the doors opened at 9am. That's 160 players, competing for five slots in Nationals in five rounds of single elimination. Having lost in round two, Batutinha slotted into Grinder Number Nine (a bit like Mambo Number Five, only different.) 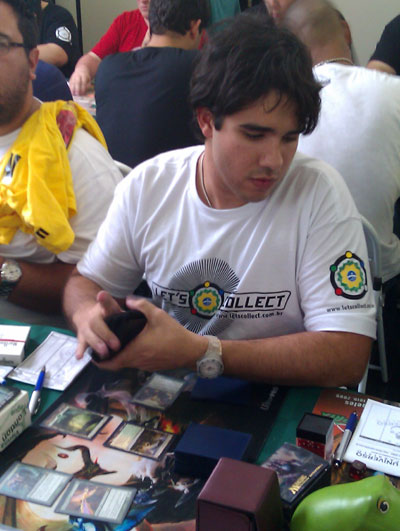 Now it was all business. Knowing that this really was the last chance of the last chances, Batutinha beat Dread vine, and Naya, and Bant, to stand at 3-0. Round four – the semi-final – saw him in deep trouble. He mulliganed to five in the opener, and got run over by Vampires in short order. His comeback was measured and assured, and even a large Tendrils of Corruption couldn't stop him reaching the final. Now just one man stood between him and a seat in the main event. One man, and a frog... 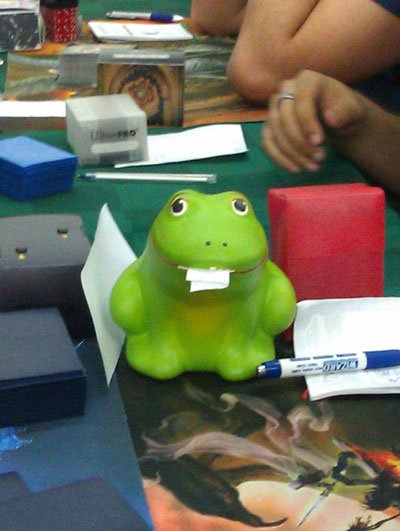 In the final, Batutinha faced Matheus Akio Yamagiura, and this time it was the dreaded Mythic Conscription mirror match. To tip the scales in his favor, Yamagiura called on the curse of the frog. Each round, he had written the name of his opponent, and then 'fed' the name to his frog, thus cursing his opponent to certain death. Whilst scientific studies into the veracity of this plan remain at the planning stage, anecdotal evidence through four rounds was that it was working just fine, thanks for asking.

The curse seemed to work, as Batutinha began with just five cards in the opener, and was promptly swallowed by a turn three Baneslayer Angel and follow-up Sovereigns of Lost Alara plus Eldrazi Conscription. Batutinha came roaring back. There were no real life misclicks, as he powered out Linvala, Keeper of Silence, then Jace, the Mind Sculptor, and then the obligatory Sovereigns combo.

So now it was just one game to go, for all the proverbial marbles. At the last, the frog turned on its master (possibly), with Yamagiura forced to begin with a chronic five card hand of four land and Eldrazi Conscription. Would one of the best players in the world on Magic Online let him off the hook? He would not. Lotus Cobra.... Jace, the Mind Sculptor.... Linvala, Keeper of Silence....bounce, attack....bounce, attack.... 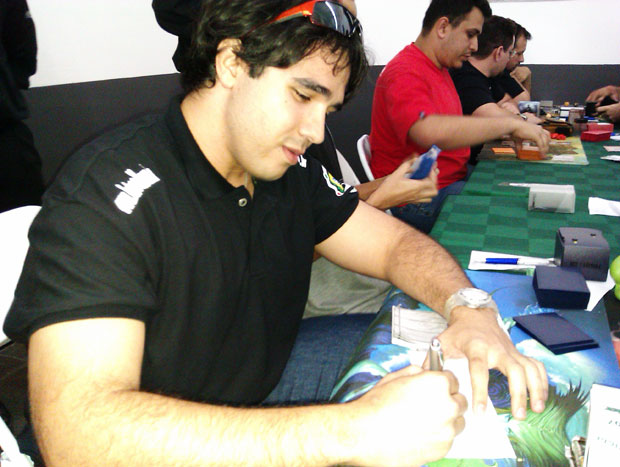 Carlos says Good Game. Or, as Batutinha would put it...gg.

We have one particular story to tell of the Last Chance Qualifiers, featuring one of the world's finest Magic Online talents. More of that later. For now, here's your chance to pore over all the decks that managed to go 5-0 and claim a spot at Nationals itself. While Mythic Conscription is certainly in evidence, there were many routes into the main event, including a super-fun Kiln Fiend deck.

4 Overgrown Battlement 3 Pyroclasm 2 Back to Nature

4 Knight of the Reliquary 4 Sovereigns of Lost Alara

4 Knight of the Reliquary 4 Sovereigns of Lost Alara