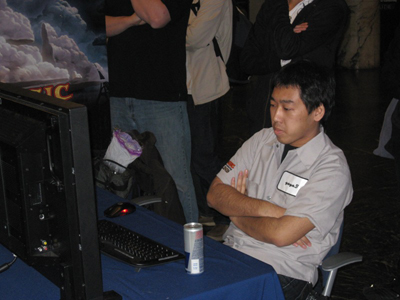 Shouta Yasooka, a.k.a yaya3Did you know that there are actually three fully-fledged championship competitions going on this weekend in Rome? In addition to the individual and team competitions, eight competitors have met here in the Palazzo dei Congressi in an area filled with an impressive array of computers and loaded up their carefully crafted decks for the 2009 Magic Online Championship.

Seven of the eight qualified via seasonal qualifier events, which included a variety of formats—Magic 2010 sealed, Shards of Alara block Sealed, Standard, and even Masters Edition III Sealed. The eighth qualified as the Magic Online Player of the Year—and what may further surprise you (hold on to your seats, folks!) is that that player is none other than 2006 Player of the Year Shouta Yasooka! All eight of the players were also granted invites to play in the main event and only Yasooka and “Orgg Ascetic” Justin Cheung had otherwise qualified (both on Pro Level).

Tonight’s format was Online Classic, an interesting midpoint between Legacy and Vintage. Unlike Vintage, there are none of the truly broken artifacts from Alpha or Urza’s Saga block, and unlike Legacy, there are some gems released (like Balance and Mana Crypt) in promotional products and the Masters Edition sets that normal Legacy players can’t use to battle.

The Magic Online superheroes, and their true identities:

Yasooka, who has collected a whopping 751 qualifier points over the course of the year, said he has not played much Classic before his preparation for this event. “I do play a lot,” he said. “Especially before the event. Twelve hours a day for the last month. Eighteen hours over the last two weeks!” He was really excited about the opportunity the Magic Online Championship provides for its participants.

The Japanese champion played a Dredge deck to go 2-1. In his match against LED Storm/Belcher player Ivan_Kulbich_aka_Striped, each game ended by turn three. In the first, Striped unloaded a hand of Dark Rituals and Spirit Guides to activate a Goblin Charbelcher for lethal on turn two, and in the remainder, yaya3 dredged nearly his entire deck using Bazaar of Baghdad before Flamekin Zealot led an army of Zombies over for the kill. 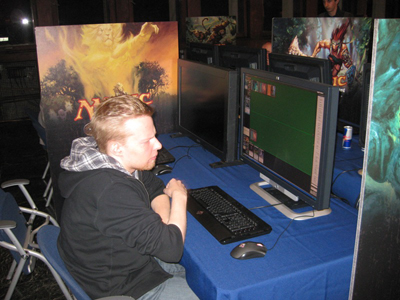 Anssi Myllymäki, a.k.a. AnathikAnssi Myllymäki, a Finnish player who tested with powerhouses 2008 World Champion Antti Malin and the Finnish National Champion Mikko Airaksinen, had a different path for preparation for the Classic portion. “I spent about twenty hours playtesting for Classic,” Myllymäki said. “I used the Decks of the Week feature on magicthegathering.com to find some good lists, and then spent a lot of time tuning the sideboard.” It seemed to have worked, because Myllymäki went 3-0 in Classic.

Myllymäki battled with a blue-black concoction running both the Painter’s Servant / Grindstone insta-kill as well as Helm of Possession. The Helm is an interesting half-combo piece, and with Dredge the definitive “deck to beat” in the format, Helm’s best friend Leyline of the Void is in many main decks, including Myllymäki’s. In his match against Striped’s LED Storm/Belcher deck, his Necropotence-fueled countermagic suite gave him enough time to resolve one of the combos over the course of the match. Myllymäki made a whopping 52 qualifier points playing Magic 2010 Limited, but felt confident in his ability with Zendikar draft as well. He laughed, “I’d be happier if it was M10, sure, but ZEN should be fine.” 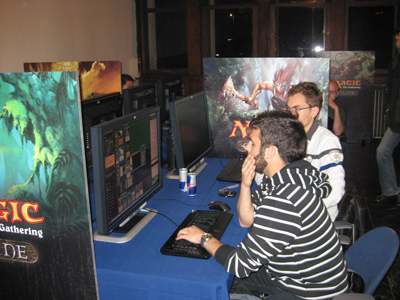 Federico Rivero, a.k.a. CharToYourFaceRather than choose one of the multitude of powerful combos in the format, Uruguay’s Federico Rivero took a different tack: combo-stopper Green-Blue Tempo. “A friend built it, tulia_jaudy, and took it into the queues, and it just kept winning,” he remarked on his deck choice. “I was expecting a field of combo, and wasn’t disappointed.” Rivero went 2-1, losing only to Myllymäki’s more controlling deck.

Like many of the competitors, Rivero spent a lot more time on Magic Online than playing paper in the past year ... but the main reason for that is his isolation from a large Magic playing community. “I’ve got a lot of friends from Argentina and Brazil that I have online,” he said. Another longtime friend from Uruguay, now living in Switzerland, made the trip down here to Rome to support Rivero, and the two clearly appreciated each other’s presence. Rivero practiced a ton for the Zendikar draft and Standard portion, so he is expecting further success as the competition proceeds.

For some, Classic was an entirely new experience. David Guiffault had never played a match of Classic before—and was unsure what to choose as his deck. One of his friends, well-versed in the Classic format, provided him with a toolbox blue-black deck that included Trinket Mage, Tinker (for Inkwell Leviathan), and Crucible of Worlds with 4 Wasteland and a Strip Mine. Although he had to spent a lot of time just reading cards, Guiffault also accomplished a 2-1 record on the strength of his play skill and the tuned controlling elements of the deck. 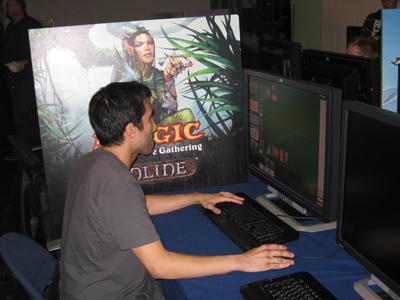 David Guiffault, a.k.a Christian FévrierGuiffault’s play, similar to his competitor Yasooka, drew a crowd of observers and friends—despite the apparently insulated nature of Magic Online play, these competitors are very social and friendly. “I’ve got a win condition!” Guiffault cried as his opponent’s Mana Crypt dealt another 3 damage. He was all smiles as he explained to whoever would listen how crazy the Classic format seemed, but also talked excitedly about playing with the most powerful cards available online.

4 Leyline of the Void 1 Necropotence

4 Swords to Plowshares 2 Path to Exile

4 Leyline of the Void 3 Mindbreak Trap

4 Leyline of the Void 1 Necropotence

2 Chain of Vapor 4 Force of Will

4 Bridge from Below 3 Leyline of the Void

4 Bridge from Below 4 Leyline of the Void

1 Crucible of Worlds 1 Rule of Law

3 Counterbalance 4 Leyline of the Void

1 Fact or Fiction 4 Leyline of the Void