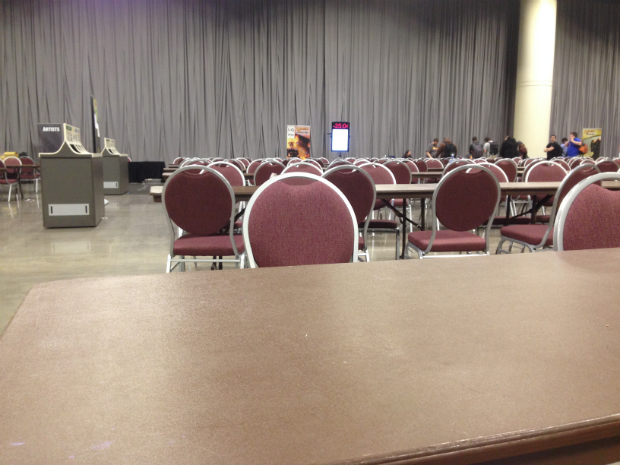 1600 players came, but only 182 will return. A surprisingly large number of well-known players were in attendance this weekend all in search of Pro Points as we power down the final stretch of the season. Nine members of the Top 25 showed up with their eyes on the trophy and the 8 Pro Points that go along with it, but none of them made it to the finish line unscathed. Five players managed to go a perfect 9-0 on Day 1: Louis Kaplan, Taylor Leehan, Jun Young Park, Michael Swailes, and the King of the Hill Barry Smith. Despite not making it to the undefeated mark, there are still a large number of top-flight players waiting to make their moves tomorrow. Luis Scott-Vargas, Pat Cox, Lee Shi Tian, Brian Kibler, and a number of other players made the cut to 7-2 and will be returning tomorrow to finish things off.

Melira Pod, Splinter Twin, and Affinity were the big players in the room today, as expected, carrying most of the players in the room to their Day 2 berth. Surprisingly, a number of unorthodox deck archetypes made their way to the tops of the standings, including RG Tron and Scapeshift. Tomorrow, we'll see if the big boys reassert their dominance, or if the unsung heroes of Modern can continue to make themselves heard as we play the final five rounds of Swiss before a cut to the Top 8 here at Grand Prix Minneapolis!

4 Karn Liberated 2 All Is Dust

4 Inquisition of Kozilek 3 Liliana of the Veil 2 Thoughtseize