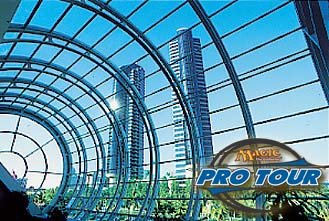 Three hundred and twenty-nine players have gathered here today in Southern California to battle for the title of Pro Tour San Diego Champion. The order of the day is Mirrodin-Mirrodin-Darksteel Booster Draft, a format that has proved to be difficult to master. Seemingly every week new strategies are coming to the forefront and old ones are falling by the wayside.

One of the recent favorites is White/Green, an archetype packed to the brim with quality creatures and combat tricks. It's found popularity as a response to removal-heavy decks that don't have answers to wave after wave of non-artifact creatures. On the other hand, White/Equipment decks (and even equipment in general) have fallen out of favor due to their fragility and the relative lack of synergistic cards in Darksteel. The other winner from Darksteel is the color Black, as its depth in commons opens up a lot of decks that people didn't feel comfortable drafting previously.

In other news, Mattias Jorstedt and Bob Maher have made it into the finals of the 2004 Magic Invitational, which was held over the past couple days in Los Angeles at E3, the biggest video game convention in the world. Jon Finkel, on the other hand, finished in last place after a disappointing 0-3 with Battle of Wits in Online Extended. All sixteen of the Invitational competitors have now made their way down to San Diego to compete in this event.

Can Finkel redeem himself? The famous Invitational "curse" states that the last place finisher will go on to win a Pro Tour within the next year. Or will Maher or Jorstedt ride their wave of victories to more success this weekend?

Only time (and fifteen rounds of Swiss) will tell.