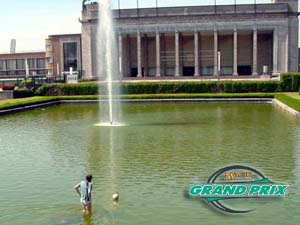 It's a lovely summer's day. The French are outside playing football. In the background is the giant chemistry-molecule-cum-sculpture thingy that is the Atomium. Inside Hall 10 of the Brussels Expo Heyzel the action has just kicked off. In 2000 the World Championships were held in Hall 5, a stone's throw away from here and now four years later Magic has returned. In a rarity for the Grand Prix the format for today and tomorrow is Standard. Players get the opportunity to bring in all the heavy gear from both the Onslaught and Mirrodin blocks with a few of the Core cards thrown into the mix for good measure. With the calendar heading off into Nationals season what better preparation for players than to get some practice in on the Grand Prix stage. Well at least those countries whose Nationals fall before the combolicious chaos that is Fifth Dawn hits Standard.

Will it, won't it? Such an innocuous piece of equipment, such a huge impact on the game. With some of the sites out there already baying for its blood Skullclamp has proven itself a real powerhouse on the constructed scene. With Goblins and Affinity decks rampant you can be guaranteed that games are going to be short and bloody. There is a new kid on the block though as Elf and Nail decks have surged in popularity recently and who can argue with the kid-factor of churning out 11/11 indestructible monstrosities. In an ominous note traders have reported doing brisk business in Grab the Reins so maybe more than one player will be on the receiving end of their own Colossus flying back at them.

734 players will have to navigate through 8 rounds of swiss today with the top 64 returning to slug it out tomorrow. So how many copies of Skullclamp in the top 8? Place your bets now…