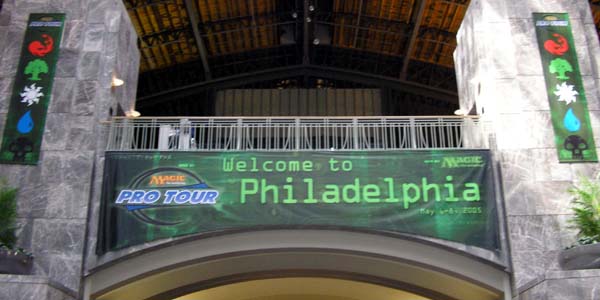 This weekend the Pro Tour finds itself in Philadelphia, calling together the world's best and brightest to throw down the Block Constructed gauntlet. However, this time there's a bit of a twist on things. Rather than the usual Top 64 payouts, this weekend's event will follow a "skins game" format, where a match win in any round comes with its own prize purse. It's triple elimination, so after 12 rounds of play we'll have our Top 8. This is all great news to the Tour's lower decks. For most, this will be the first time they make money at a Pro Tour!

The format this weekend echoes that of Pro Tour-Venice with its focus on mana and colossal monsters. Wirewood Elf and Explosive Vegetation have been admirably replaced by the Little Rampant Growth that Could and Kodama's Reach. Those shuffle effects do a sick double-duty thanks to the presence of Sensei's Divining Top. Poor Orochi Sustainer was shocked to find himself playing third string. And the beasts? Well, there aren't any 20/20 dragons, but suffice it to say that Kodama of the North Tree is the baseline for mad beats. Before round one was over the Red Zone had been visited by almost every Myojin (including Seeing Winds!), countless Dragon Spirits, and even Kuro, Pitlord!

With so many decks packing the same basic green backbone, it's exciting to see players taking them in a number of different directions. The diversity afforded by the Elder and Reach gave birth to a multicolored monstrosity that keys off Gifts Ungiven and the recursion of Hana Kami via Soulless Revival. Others use that mana to power out Sway the Stars, despite it costing a hojillion. The biggest Upheaval in the business comes out sooner than the opponent would like thanks to Heartbeat of Spring, and then some baddie like Yosei the Morning Star kicks them into next week. Some players have gone to the power of the snakes themselves, thanks to Sosuke's Summons and powered up by the entire Seshiro lineage. There's even a deck that sends out for beats with the mighty Godo, Bandit Warlord. When he serves up the Dragon's Fang, you're looking at a quick 16 to the face.

It's not all green machines. The go-to foil for the control decks is the white weenie powerhouse. It's got a sweet curve and the wrecking power of Hokori, Dust Drinker. In fact, you'll see a lot of Honor-Worn Shaku's (no jokes!) out there this weekend to counteract that.

Let's not forget Umezawa's Jitte, the little card that defines the whole format. Preposterous in Limited, it's every bit a sick in 60-card decks. In fact, it's so key to the aggressive decks that the Japanese have cited it as the reason to play control. They took this logic a step further and have tweaked their decks with weapons specifically aimed to hamstring the many control decks out there. Block Constructed has always been a Japanese specialty, so don't be surprised to see them have a representative on Sunday.

The other think tank to keep your eye on is the super team formed around the boys from TOGIT. Together with some of the best from the rest of North America and Europe (especially the Dutchies), this morass of talent might be the best-prepared squad in the room. They are predicting, get this, FOUR of their ranks will be competing on Sunday. Is this more American hubris, or the start of a renaissance of American Magic? Stay tuned to find out.