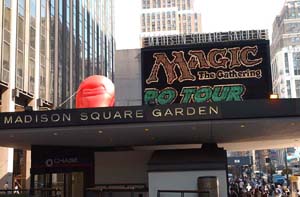 One hundred and forty-two teams showed up for the first Pro Tour of the seventh season of professional Magic. 426 competitors makes this the largest PT ever and after seven rounds of Invasion-block Team Sealed, only one team of three remains undefeated: My Team Part 17. Zvi Mowshowitz, Alex Shvartsman, and Justin Gary went 7-0 with a name that reeks with self-parody (no one will let Zvi forget about the "My Fires episode"). They beat Metagames (the "other" French team, consisting of Franck Canu, Wilfried Ranque, and Raphael Levy) in the final round showdown of 6-0's.

A number of big name teams failed to put up the 5-2 record necessary to advance today 2. Your Move Games bowed out early when their record was 1-1-1 because they wanted to preserve their current high rating for the next team Masters Series event and they felt their odds of going 4-0 from that point weren't worth risking another loss. Antarctica, Black Ops, and Potato Nation (the defending champs) all fell to 3-3 with 6th round losses.

In the final round, though, Game Empire 2; Huey, Brock and Linde; Godzilla; A Little Too Sick; and the Ancient Kavus all picked up their precious fifth win when their back was against the wall.

There are still plenty of other familiar names and high profile teams to cheer for too. Brian Hacker and Gab Tsang are trying to prove once again (pronounced with a Cali emphasis as "once a geeen") that they are the masters of team draft. Playing as B.I.G with Igor Frayman as their third, Hacker and Tsang claimed 7th last year. They traded Frayman for money draft aficionado and gamer for life Ben Rubin and went to Grand Prix Columbus without an invite to the dance or even a PT point back-up plan. One Top 4 finish later, they were headed to New York as Dynasty and they only lost once on Friday. Now they get to draft and the rest of the field should be scared.

Even Righteous Babe has advanced to Day 2. Mike Flores, John Shuler, and Brian Kowal will have to continue their argument tomorrow about which one of them is actually a worse Magic player.

Half of last year's final four is still playing. The Car Acrobatic Team picked up their second loss in the final round to Dynasty, but still sit in Nth place. Lyskavermaden has two thirds of Draften und Spielen, but old school German Peer Kroger is acquitting himself just fine in Christian Luhrs' normal seat alongside Patrick Mello and Stephan Valkyser. Lyskavermaden, by the way, is the German translation of Flow of Maggots.

The other high profile German team - Phoenix Foundation - also went 6-1 on day 1. Kai Budde dragged his buddies Dirk Baberowski and Marco Blume out of retirement and apparently the Budde magic rubbed off on them. The only two-time Player of the Year in the game's history has picked up right where he left off by winning Grand Prix London last weekend and has his team in great position to make a run at Sunday.

Oh yeah, this just in: AlphaBetaUnlimited.com is still good. Both the "A" team (Ryan Fuller, Chris Benafel, and Noah Boeken) and the "B" team (Brian Hegstad, Phil Freneau, and Peter Szigeti) cruised into day 2.

Day 1 was full of intense competition, thrilling wins, and tough losses. There were also some great stories about obscure cards and situations. Jon Becker got his team (Cyanide) through to day 2 by sideboarding in Planar Overlay and Protective Sphere against an opponent who played turn 4 Cromat in game 1. Turn 5 Overlay single-handedly won him his match!

The other interesting news at the Pro Tour site is the Michael Jackson concert going on in Madison Square Garden's main arena. Not just the King of Pop, but also Britney Spears, N'Sync, and a number of other big names are performing on the other side of just one wall. It's a fairly soundproof wall, but the bathrooms are actually shared with the concertgoers and the thump of bass drums was heard on and off throughout the seventh round.