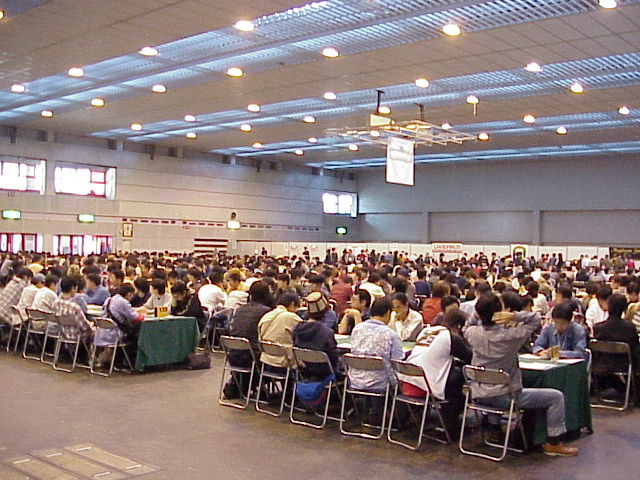 They came, 705 strong, eager to show their limited skills. Not many players from outside Japan decided to make the trip, no doubt dissuaded by the astronomical attendances that make Japan famous. Many of them will probably be found duking it out at the more-accessable Grand Prix Montreal.

For those who chanced the trip, however, it paid off in spades. Asian Grand Prix fixture Alex Shvartsman showed how he earned that reputation, finishing the day in eighth place. Olivier Ruel's last minute decision to attend led to a mad dash for the airport. All's well that ends well: He cracked Kamahl, and now he's in very good position for the Top 32 finish that will qualify him for the New Orleans Masters Series.

It wasn't all sweetness and light. Many of Japan's best-known players liked losses so much that they went back for thirds. Itaru Ishida, Kenichi Fujita, and Jin Okamoto all exited before the final round. Tsuyoshi Fujita was eliminated by Tobey Tamber in a final round match to determine who would advance. Tamber squeaked in at sixty-fourth place.

That doesn't mean the stars are absent from Day 2. Old-schoolers Jun Nobushita and Toshiki Tsukamoto will make an appearance, as will Rookie of the Year Katsuhiro Mori and ex-National Champion Tsuyoshi Douyama. None of them would be a surprise in the Top 8.

Closing the day at the top of the standings are relative unknowns Ryouma Shiozu and Kei Suzuki. In doing so, Suzuki repeats a performance he managed at Grand Prix - Kobe. Perhaps these two are about to make names for themselves.

For many, it was their first exposure to the wooly world of Odyssey sealed. The lessons of Invasion Block were hard to unlearn. Odyssey's removal is sparse and awkward, leading to a focus on combat and combat tricks that is unfamiliar. As a result, the best colors are green (for its high power-to-casting-cost ratios) and blue (for its inexpensive evasion). Perhaps the biggest obstacle to success is tendency toward multicolored decks that Invasion taught. Odyssey's mana fixers are few and far between, and careful attention to mana balance is key.

Day 2 means shifting gears. As it is with any new set, players will have different valuations of the cards. This means that those in the know will be able to score more powerful cards later, leading to dominant decks. It will be interesting to see if the "dominance" of blue and green leads to the success of red and black decks.