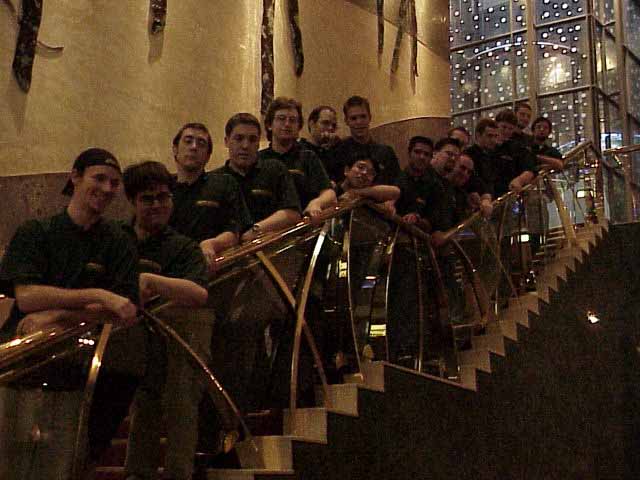 The big story on Day 1 was Alex Shvartsman. The Grand Prix superstar who has been criticized for not having any Pro Tour Top 8's on his resume is the only 5-0 player in the field. Shvartsman is the only person running Weatherlight in BYOB and he did it for Lava Hounds (prompting many to ask 'Who let the dogs out?' in horrible rhythm). The Invitational M.V.P. so far, however, isn't even competing. Australian Ben Seck (known as TBS (for 'The Ben Seck') on IRC) has been an amazing host. He leads players to dinner, finds the cards they need for their decks, found a gym and arranged a basketball game, and has been an all around great guy. Over 100 cards from his personal collection got played in rounds 4 and 5 on Thursday.

Shvartsman and Jon Finkel were the only players to go 3-0 in this year's Duplicate Limited. Mark Rosewater outdid himself this year by taking 90 cards from across the years of magic and changing all their mana costs. 76 of the 90 cards he came up with were played by someone in one of the most diverse sets of Invitational decks ever. Green was a little bit too good with 14 of the 16 players running Forests, but only 7 cards appeared in 10 or more decks. In retrospect, the secret to the format was ignoring all the goofy combos that Rosewater built into the format and building a 2-color beatdown deck. Green/red, Green/black, and Green/white were all reasonable options and the 4 players who ran those decks went a combined 10-2.

After the 3 rounds of Duplicate Limited were done it was time for the debut of "Bring Your Own Block (B.Y.O.B.)." Tempest was really popular, especially the red cards that Dave Price used to win Pro Tour L.A. III, but there were actually 9 different decks running around and it's too early to say who came up with the best deck. Yoshikazu Ishii has a nice Fires of Yavimaya deck that destroyed Gary Wise's Humility deck by dropping Keldon Necropolis to bust out of the lock! Noah Boeken is sitting in a second place tie and he got there in part by bating Chris Pikula with Apocalypse. The defending champ admits that it never even occurred to him to play around Apocalypse. Pikula felt even worse after getting paired against Darwin Kastle in round 5. Both players ran Survival of the Fittest decks with Ashen Ghouls and Oath of Ghouls. Kastle played a lot of Survival "back in the day" putting up 3 Grand Prix Top 8s that season. After the match Pikula announced that he has never been outplayed so badly in his entire career.

The match between Gary Wise and Bob Maher was a beauty. They both got Orim's Prayer into play in game 1 along with 5 Kjeldoran Outposts between them. With over 50 dudes in play, Maher tried to Disenchant Wise's Prayer. A huge stack ensued and 10 permission spells later, Maher won the fight and served for 21 points of damage. Maher set up Browse/Digger in game 2 and easily won that match.

All 16 players will be back tomorrow for the last round of BYOB and the three rounds of Solomon Draft - which is said to be the most skill testing format in Magic. Some are trying to get into the Top 2 and more are just trying not to be last. Stay tuned to the Sideboard for live coverage.