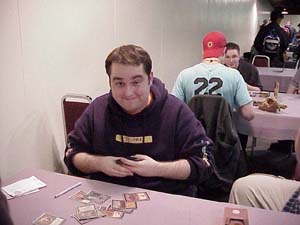 Brock Parker led the tournament after the first day

641 players showed up for Grand Prix Detroit, making it by far the largest North American Grand Prix ever. After 8 rounds of Invasion/Planeshift sealed deck, Brock Parker sat on top of the standings. Parker may not be as well known as his best friends Matt Linde and Billy Jensen, but this weekend the "other" member of their team Pro Tour team is trying to pad his own resume. Parker didn't drop a single game on day 1, posting a perfect 8-0 record. His buddy "Baby Huey" (Jensen) is also 8-0, as is the current leader in the Player of the year race Mike Pustilnik. It's quite a close race this year and "Doctor P" would love to add to his lead. All three ran Blue/Black/Red sealed decks on Day 1. Don't look now, but those three are joined at table 1 by Grand Prix superstar Matt Vienneau (who claims that his deck was actually good this time, which explains why he lost a round).

I saw a lot fewer black/blue/red decks during feature matches and while various players were showing off their decks. However, at the top of the Swiss there was little doubt that black/blue/red is still king. Twelve players entered the final round with either 7-0 or 6-0-1 records. Their decks lined up as follows:

It may be that blue/black/red isn't always the best way to build any given sealed decks, but the best ones you can hope to open are.

The 1700-flag money once again went down below the cut for Day 2. In fact, only 4 eligible players advanced to day 2. The 16th place person who was also eligible for the 1700 money finished 100th!

Perhaps the most interesting story of the day happened late in round 6 when the door knob leading into the men's room broke an several magic players, including Scott Johns, were trapped inside for 10-15 minutes!