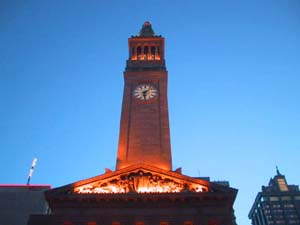 With 195 players it was never going to be too difficult for the players with 3 byes to make into day two. However, as Odyssey sealed deck does have a significant luck factor involved, many with the luxury of being able to sleep in on day one because of byes, won't be coming back for day two (except for great side events of course!). As Beau Weyers, a local Brisbane Magic player of more then 5 years commented - "I thought I had a great deck, lots of solid creatures. But then I come across these guys with my deck plus some fat rare creatures". The winners will be those blessed with a little luck, both in the draw and in the opening of packs.

"It all comes down to the bombs" was a common complaint from players. Competitors at the top tables often win by simply out-bombing their opponent. They may both have equal take down and general creatures, but some players opened rare victory cards like Aboshan, Kamahl or mass take down like Shower of Coals. These cards just break the stand off situation. Those players on 7-0 or 6-1 heading into day two most likely had multiples of cards like these.

Day two however will be a different story. With Rochester draft the luck factor is minimized. Whilst it still plays a part, with lucky players opening bombs for first draft picks, the more skilled players will build a deck with more cohesion, giving them a chance to outplay there bomb lucky opponents, an option they may not have had on day one sealed.

Heading into day two are plenty of familiar faces. Little known local Brisbane Boy Dan Romans heads the standings at 7-0 with the best resistance. Joining him with perfect 7-0 records are Lenny Collins, who has years of experience playing in Sydney and has two Australian National team memberships on his resume, and another little known player Dante Rosati. Alex Shvartsman has an excellent chance to take the title away from the Australians, sitting in 7th place. However the top 64 is littered with players eligible for amateur prizes, so in all likelihood a very fresh player could walk away with the title.