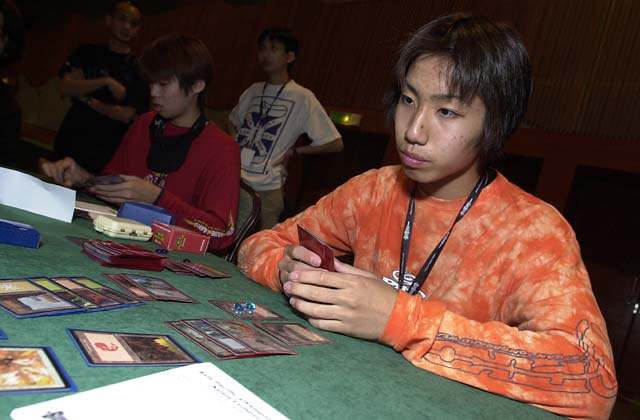 Saito Tomoharu, the leader after Day 1

It was the Apocalypse, all right.

In hindsight, things weren't going to be easy on Friday's drafters. Rochester drafting thrives on being able to signal to your opponents, and in the case of Invasion-Planeshift drafting, that is easy to do. A blue card signals preference for blue, as well as white cards, black cards or both.

However, with Apocalypse in the mix, draft decks aren't limited to allied color groups. A blue card can suddenly mean a preference for blue-red-green. With so many new interpretations for a card choice, players need to read much more into each other's picks.

The consequences for failing to do so are dire. A misread signal can convince a player to squander early picks on a color that soon dries up. If they are forced to shift more than once, they can find themselves faced with the awful choice of running a shambled mana base or playing plenty of Bog Initiates just to get to twenty-three non-land cards.

Worse yet, this kind of flailing can cause a cascade effect over the table, disrupting all but the most steadfast of drafters. There are two prevailing strategies to avoid this. First, draft mana-fixers much higher than usual. This will let you have access to the best cards you draft. Naturally, this can lead to an overall lower quality of card in your deck, but at least you'll be able to cast them.

Similar logic guides those who stick to three allied colors. Invasion and Planeshift will give them the base of a solid deck, and they still have access to one set of the opposing-color pairs in Apocalypse.

The Japanese had a numerical advantage going into the tournament, and they demonstrated their prowess. Seven of the top eight players in the standings after six rounds were Japanese. It was a veritable who's who of talents. From established pros like Satoshi Nakamura and Tsuyoshi Fujita, to lesser known commodities like Jun Nobushita and Saito Tomoharu. Tomoharu in particular seems destined for greatness, having won the 1999 constructed event "The Finals", that had previously served as a springboard for the careers of luminaries like Nakamura and Toshiki Tsukamoto.

Also at the top of the shop are Magic Invitational competitor Koichiro Maki, Toshiharu Niwa, who has the highest limited rating in Japan, Rookie of the Year hopeful Katsuhiro Mori, and the lone non-Japanese player, Peter Chao, who placed in the Top 8 of the Chinese Taipei Nationals.

The one surprise of the event was the performance of two-time APAC Champion Masaya Mori. Many players expected him to find a way to make it three in a row, but after four rounds he had just one match win under his belt. He dropped from the tournament before the day was over.

Day 2 is the standard portion, and although many competitors feel the format is completely explored, there may be one or two surprises waiting in the wings.