Nick Eisel, in first place after 8 rounds, is currently the number one ranked limited player in the world... on Magic Online. Using the screen name "ThatsGameBoys," Eisel has racked up quite an impressive rating – not to mention collection of cards – at the expense of his opponents. It's heartening to see that the skills honed in the virtual game can translate into success in pro-level events.

Joining him at the top table tomorrow will be a motley, yet well-recognized, assortment of players. Gab Tsang finished 2nd at GP Cleveland, and would love to improve on that here. Bob Maher has already proven his mastery of the format by winning GP Copenhagen. William Jensen quietly crept up the standing with what he called a "bad deck." Igor Frayman, last seen moneydrafting in the bowels of the Queen Mary, could be making his return to glory here. And Craig Krempels and Joel Frank represent two of the current East Coast hotbeds of Magic talent – New Jersey and Boston respectively. 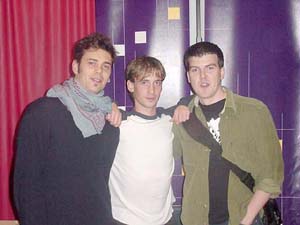 Haim, Canu, and MelloThat leaves 8-0 Christophe Haim. Haim traveled to this event all the way from France and is making sure the trip wasn't in vain. He was accompanied by countryman Franck Canu (who missed Day 2 by only a few places); together the two of them are barnstorming America's Magic events – Philly, Pro Tour Houston, GP Los Angeles – and will be staying with bad boy Peter Szigeti during the downtime. The two Frenchmen hope to get a better grasp of English during their stay, although Szigeti is probably far from the ideal tutor.

Germany's Patrick Mello also made the trip across the Atlantic, but lost the elimination match to Canada's Jon Stern in round 8. It is not often that Europeans travel to the States for Grand Prix, whereas the reverse usually occurs. Apparently plane tickets are finally cheap enough to make such jaunts possible.

Amateur players fared well in the event, placing 20 in the top 64. Are they new stars on the rise, or just beneficiaries of lucky breaks? I'm sure there's plenty of both, and they'll be swimming with the sharks tomorrow.

And what of the sealed deck format itself? Yes, the powerful rares can often swing games, but the high-powered players at the top of the standings show that the format is far from random. The delicate interactions of the tribal cards, combined with the huge bluffing factor of morph, make deckbuilding a real challenge; the one extra Goblin or cycling card could make all the difference. The level of gameplay detail in the format was made quite evident in the Round 7 match between Brian Kibler and Justin Gary; after three games of ridiculous bombs like Grinning Demon, Silvos, Centaur Glade, and Insurrection on both sides of the table, the match was decided by Gary morphing his Aphetto Alchemist at the wrong time, leaving him one point shy of victory.

But tomorrow will be Rochester draft. The tribes will be in full effect. Current thought is that white/red, the favorite combination of everyone from Kai Budde to Geordie Tait, is nigh-unbeatable. But the metagame is self-correcting, and someone may come up with the new secret weapon. Whoever does will find himself up a few pro points and several thousand dollars by Sunday's end.