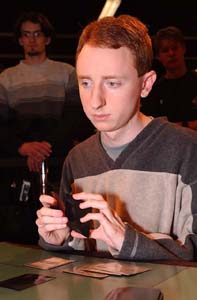 At the end of the first day of competition at Pro Tour Chicago, the dominant force of the tournament was...New Jersey? Sure, it doesn't quite have the strong cultural association of a Magic stronghold such as Germany, but today the Garden State climbed to the top of the standings. More specifically, the CMU/TOGIT group had two members finish the day at 7-0- Eugene Harvey and Osyp Lebedowicz. Teammate and current leader in the Rookie of the Year race Craig Krempels along with longtime CMU member Mike Turian join them with very respectable 6-1 records. The other undefeated player after the end of Friday is Derek Bruneau, a Boston player who emerged from his first day on the Pro Tour without a match loss. That's helped the US match stride with the Europeans, who have been ruling the top of Pro Tour standings for some time now. In fact, it's almost all names in the 6-1 group. People like Budde, Thoren, and Rubin as well as a host of others.

Magic Online has proven to be a big factor in success, most notably with Nick Eisel. Nick has gained a reputation for being an authority on Onslaught limited, due to his articles on Sideboard and StarCity, and the success in cyberspace to back it up. Eisel has two accounts on "Modo", and both are ranked first and second in online limited rankings. This experience has led him to a 5-2 record on the day. William "Baby Huey" Jensen has had a reputation for being an excellent limited player for years now, but Magic Online couldn't have hurt him in his preparation for today's 6-1 performance.

As Magic nears its tenth anniversary, more players will fade into legend as they drop off the Pro Tour, or simply stop showing up. Dave Price said a goodbye to the Magic community in his Invitational report, anticipating a fall off the gravy train. As the seventh round drew to a close, Price was in 129th with one match left to be entered into the database. Once it was entered and the final standings for the day had been updated, Price had moved up to 125th, and is still on the Pro Tour...at least until Venice. Price's long time friend Jon Finkel was also in danger of falling off the gravy train, but his story is a lot more interesting. Finkel didn't play Magic for a month prior to this tournament; not even Magic Online. He didn't plan on showing up to Chicago, and only decided to make the trip when he found a cheap flight. Obviously this was a good idea, as the Finkel of old stepped into the convention center today, and went 6-1. With a good run tomorrow, "Johnny Magic" may be back to the Top 8 stage, and he wasn't even planning on showing up. No one can tell how much enthusiasm the old guard of Price and Finkel have left, but despite their perceived apathy they are certainly clawing and scratching their way to stay on the Tour. 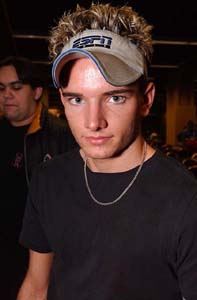 And what about archetypes? Blue/red was widely considered to be the best color combination in the format, but today's seven rounds showed green/black to be the true dominant force. Green and white were underdrafted at many tables, and it will be interesting to see if this trend continues.

A debate has been circulating regarding the skill level of Rochester draft. Once considered to be a very skill intensive format, Rochester has drawn comparisons to Sealed Deck by players such as Zvi Mowshowitz. The theory is that when everyone at the table cooperates, the cards simply fall into designated seats. The interesting aspect involved here is that for years, cooperative drafting has been the philosophy preached by the general consensus of Pros when it came to Rochester draft- hate drafting that key card or switching colors on the fly was grounds for spiteful reactions. But, now a more aggressive approach to Rochester draft is emerging to combat the otherwise structured action at the table. Is this the beginning of the next evolution of Rochester draft on the Pro Tour, or has the format reached a point where the skill level is less important? Some more answers may emerge tomorrow.