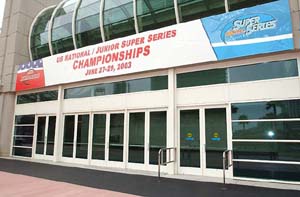 After three rounds of Standard and three rounds of Rochester Draft, Brian Kibler stands on top with a perfect 6-0 record. What's even more amazing is that Kibler only played one color all day: black. He went 3-0 with an aggro Zombies build, then managed to draft a mono-black deck in his pod and sweep it. Michael McGee also went 6-0. Interestingly, McGee went into the last round at 5-0, and was planning to drop if he finished at 5-1. Why? McGee is qualified for the Junior Super Series tomorrow, and was in a tough situation where he could either hope for another great day in Nationals, or drop and enter the JSS with an anticipated higher probability to walk away with prize money. As is, he had Echo Tracer to stop Phil Freneau's Mythic Proportions, and will leave the convention center tonight without a match loss to his name. Filling out the undefeated players on the day is Jason Cross.

After coming up short one match last year of retaining the Championship in the team event of Worlds last year, America is looking to send a strong team to Berlin to take the title back from the Germans. Looking at the top of the standings, it becomes apparent that there is potential for the United States to send an exceptionally strong team to the event. Dave Humpherys, who now calls San Diego his home, is currently 5-1. Humpherys is no stranger to Worlds success, placing in the Top 4 of the individual competition last season with Psychatog. Today, he played the same Standard deck en route to his strong finish. The TOGIT/CMU connection is also heavily represented at the top of the standings, with Adam Horvath, Mike Turian, Craig Krempels, Jordan Berkowitz and Gerard Fabiano all at 5-1. All the players from the team who finished in the Top 16 today were playing either Wake, or red/green. Other name players to watch at 5-1 are Neil Reeves, Tony Tsai and Paul Reitzl.

In the past few years, Nationals has showcased new players who use the event as a springboard to a successful career. Brian Hegstad and Eugene Harvey went from being "relatively unknown" players to Worlds Team Champions, and Harvey even came back the next year to win the whole thing. Matt Linde was unknown before winning the National Championship, and went on to make Top 8 in multiple Pro Tours. Even Eric Franz and Andrew Ranks surprised everyone by not only coming out of nowhere to make the National Team, but also staging one of the most impressive comebacks in Pro Tour history by fighting seemingly impossible odds to force a showdown with the Germans for the championship. The top of the standings has an interesting mix of new faces and veterans, and tomorrow the field will break down to eight as we get one step closer to finding out who will carry the stars and stripes into Worlds in August.