318 players came to New Orleans today to compete in an Extended format that was entirely unexplored. Since Worlds, Goblin Lackey, Frantic Search and Entomb were banned in an effort to slow the game down. 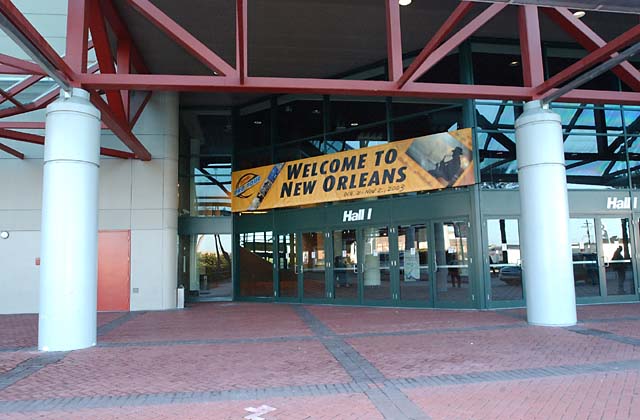 On the other hand, Mirrodin was printed.

Thanks to the mana acceleration of Grim Monolith, Voltaic Key and Thran Dynamo, the set's most powerful cards can come out much faster than in other formats, which tends to break them in half. On top of that, Goblin Welder and Tinker allow players to abuse cards such as Mindslaver, Goblin Charbelcher and Myr Incubator to insane lengths.

The result? The vibe in the convention center was surprisingly fitting. Some players chose to dress the part for Halloween, and as crazy as some of them looked, the stories from the games were even more attention grabbing. Stringing together Word of Commands or making tons of 1/1 tokens in the first few turns of the game may be frustrating, but it certainly makes for interesting feature matches. Between rounds, players were congregated together telling the latest war stories for a new format firmly entrenched in powerful, game swinging cards that can change everything in the blink of an eye.

This is not to say that today was all about artifacts. Emanuele Canavesi from Italy was the only player to go undefeated, and played Psychatog, a deck that has been dismissed in most formats for the past year or so. Right behind him is rising Canadian star Richard Hoaen, who played Gob-Vantage. Picking up where the Japanese Goblin deck from Worlds left off, this archetype uses the Recruiter/Ringleader combo, but in combination with Mirrodin's Goblin Charbelcher for a combo edge. In addition, he packed plenty of artifact removal in the sideboard in the form of Pulverize and Rack and Ruin. Right behind him in third is Jin Okamoto, also playing a version of Gob-Vantage, but with Seething Song to make the deck even more geared towards combo. Pro Tour - Yokohama Finalist and Rookie of the Year Masashi Oiso finished the day in ninth place, playing Tinker. One of last season's big stories, Mattias Jorstedt, is in position to make yet another Top 8, coming in eleventh place with Tinker.

An interesting aspect of today's event was the fact that two of YMG's decks were leaked, and played by competitors outside the team. A Goblin deck that combos out with Food Chain was originally developed by Your Move Games, and leaked early in playtesting. As a result, a handful of players ran it today. What was more shocking, however, was the fact that a YMG designed Scepter Oath deck was also leaked, and a few players ran it today, card for card. Unlike the Food Chain Goblin deck, which was a known leak, Your Move Games didn't know that their Oath deck had been leaked until today started. Two notable players outside YMG playing these decks are Neil Reeves, who played Scepter Oath to twelfth place, and Dave Williams, who played Food Chain to eighteenth place. It's relevant to note that for this Pro Tour, all eyes were on Your Move Games after their domination of the Extended Pro Tour last year. With that much attention, it's not terribly surprising that something might slip through the cracks. It will be interesting to see if this affects Pro Tour team politics, and the way deck tech is protected in the future.

Now that all the archetypes have been revealed and the decklists are on the internet, tomorrow will be centered around an environment that is obviously more familiar than it was when players first started shuffling their decks for round one. Check back to Sideboard.com tomorrow to find out how the tournament changes when all the information is available. Once the dust is settled, eight players will move onto Sunday and an opportunity to become a Pro Tour Champion.