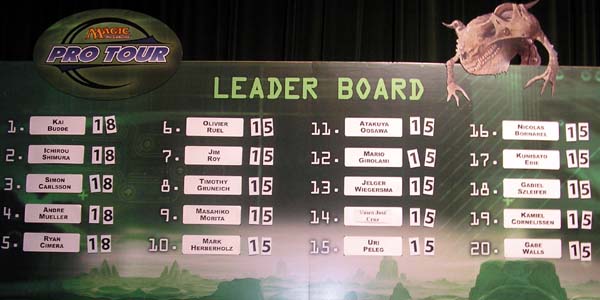 Day One of Pro Tour-Philadelphia is over and there are 105 players coming back for more Saturday. Of those 105, only 33 have a loss to give before elimination and the rest of the crowd will be running the harrowing single-elimination gauntlet.

Sitting atop the standings with a perfect 6-0 record is the familiar face of Kai Budde. After a couple of recent lackluster finishes the four-time Player of the Year seems to be back on top of his game. Kai was not associated with any of the Magic superpowers for this tournament and instead relied on a group of friends from Hamburg and Magic Online Constructed queues to prepare. His black-white deck has been drawing stares - and then raves - all day long.

Of the remaining four undefeated players, there were three players with White Weenie and they came in three different flavors. Ichirou Shimura was playing a version that featured the Limited bomb Waxmane Baku. Simon Carlsson of Sweden featured the most aggressive version of the deck that eschewed Tallowisp and featured eleven one-drops. 16-year-old Ryan Cimera, the highest finishing American on Day One, played a version that looked the most like what people were expecting coming into the tournament. German Andre Mueller rounded out the undefeated squad with a 4-color control deck.

The success of the white deck should come as no surprise since it was in a virtual tie for second place as the most played deck in the tournament. What did come as a surprise is the thoroughly underwhelming performance of the Snakes deck on the weekend. Seventy-eight players put their faith in the hands of the Sosuke clan but they only led one player as high as the Top 16 at the end of play Friday - Vasco Jose Cruz of Portugal.

The skins game-style payout at the center of much of the buzz for this tournament provided plenty of drama all day long with increasing amounts of cash on the line every round. Starting Saturday, the cash on each round starts out a $250 per win and ramps up to $1,500 by the end of the day. Of the 311 players who started play Friday, only 40 failed to win at least one round and finish in the money.

There is abundant star power among the 105 Day Two competitors, with such luminaries as Oliver Ruel, Masahiko Morita, Jelger Wiergesma, Gadiel Szleifer, Kamiel Cornelissen, Gabe Walls, Tsuyoshi Fujita, Richard Hoaen, Antonino DeRosa, and Tsuyoshi Ikeda among the 5-1 players with a loss to spare.

Some of the names facing a more hazardous passage include Osyp Lebedowicz, Brian Kibler, Antoine Ruel, Shuhei Nakamura, and Eugene Harvey. One more loss for these players anywhere before the final round will send them to the sidelines.

Josh Bennett ran down round-by-round eliminations of some of Friday's top names in the blog, so we'll spare them the ignominy of calling them out here. Needless to say, there were some powerhouse players going home earlier than they certainly expected.

Check in Saturday as we track all the action in the bubble matches, peer under the hood of the finely tuned engines at the top of the standings, and wind our way through cut after cut until only eight players are left standing for Sunday.