Posted in Event Coverage on November 6, 2005

Australia is a very laid back country, to the point that some American business folks I've talked to get frustrated at the lack of… momentum that can sometimes occur when dealing with Aussies. However, laid back does not mean that Aussies don't value punctuality, especially when it comes to showing up for round 1 of Day 2 at the yearly Grand Prix. That's why it was rather curious when Terry Soh, in a personal first for me, did not show up for his first round feature match, thus falling to 7-1 on the weekend. What's perhaps more intriguing is that if he doesn't show up in time for the second round of the day, policy says he should be dropped from the tournament, in spite of the fact that at 7-1 with excellent tiebreakers he's almost a lock for Top 32 money. Soh is staying in town with some friends - it will be interesting to see what he has to say provided he's able to show up today. 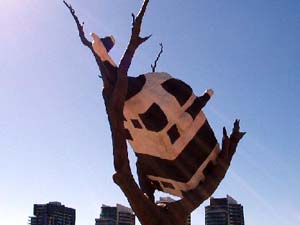 Melbourne is a city known for its art and culture. 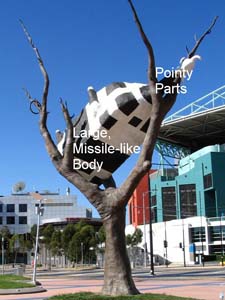 The question is, is this art? 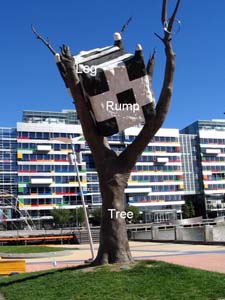 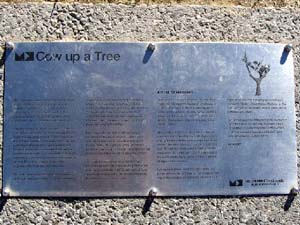 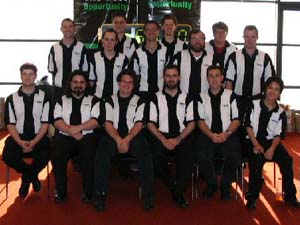 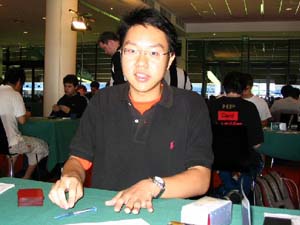 I haven't been able to confirm this with Mr. Soh, but I asked good friend Tomoharu Saito about why Terry was so late in arriving this morning, and this is what Saito had to say (loosely translated from Japanese):

"Terry is a big baller. He looks like a sweet Malaysian kid, but the truth is that he has a girl in every country and uses the Pro Tour as an excuse to visit all his ladies. This is his first time in Australia though, so after dinner he put on his super-slick polyester leisure suit and went on the prowl. His first stop was a jazz club in Chinatown, where he walked out with a smoking hot Chinese babe on each arm. Then they gained entrance to a dance club on Swanston Street, where Soh completely tore up the dance floor with his styling disco moves. Nobody does the hustle like Terry. John Travolta ain't got nothin' on him. At the end of the night, he had received so many messages from people looking to hook up that his cell phone battery died, so his alarm didn't go off this morning. Luckily his breakfast date knocked on his door at 9AM, or else he might have missed Day 2 entirely."

And that, my friends, is why it's dangerous to be a baller. 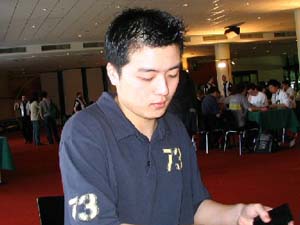 James Zhang and his Psychatog deck are still undefeated on the weekend, approaching the point where drawing in for the remaining rounds would be a real possibility if he's given opponents that can do the same. Andrew Vance is a 28-year-old public servant who is playing on of the many Boros decks lurking at the top tables. Tomoharu Saito has been grumping about the amount of Kataki, War's Wage laden decks at the top tables, a terrible card for his Affinity deck to deal with, but this time the red and white cards would have to overcome Dr. Teeth. This is a matchup so bad that last weekend Tsuyoshi Fujita actually sided out three lands while playing Antoine Ruel just to try and get lucky.

Savannah Lions from Vance ate a Force Spike on their way to the grumper, but a second turn Grim Lavamancer resolved. Another red wizard Leaked his way to the graveyard as well, but his little buddy got in there for one and Lightning Helix to Zhang's dome put his life at fourteen. Psychatog hit the board on turn 4 for Zhang and immediately illustrated just why this matchup is so terrible for Boros players. Once Dr. Teeth hits the board, the whole concept of "attacking" becomes more of a a philosophical concept for the Red/White player rather than something that has any bearing on the real world. Vance's little Lavamancer tried and tried and tried to whittle down Zhang's life to a point where leftover burn could kill him and miraculously succeeded. Zhang simply couldn't find quite enough card drawing to finish Vance off with a pair of Togs, now did he pluck the necessary Smother to dispatch the Lavamancer before it contributed to his demise. 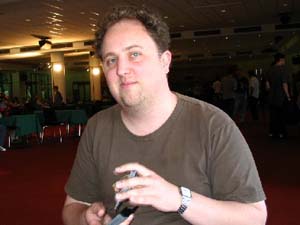 Zhang played first in game 2 and had the very Australian second turn play of Boomeranging Vance's Sacred Foundry that he'd just paid three life to put into play untapped. Sadly, Vance had Isamaru in play on turn 1 and Grim Lavamancer on turn 2, putting a heap of pressure on the mana screwed Zhang, who was also getting poked in the eye each turn by his own Cephalid Coliseum. Being at four life by the time you put your fourth land on the board must be an unsettling experience. Zhang survived a couple more turns on the back of countermagic and some creature removal, but unless Zhang's luck completely flipped and Vance drew all lands from ther eon out, the outcome was hardly in doubt. One Firebolt to the dome and a Molten Rain later, and James Zhang had his first loss of the weekend, while Boros notched an improbable win from what is usually an awful matchup. 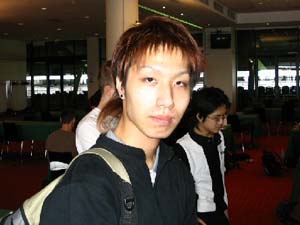 We haven't had much luck with feature matches today. Soh completely missed his round to start the day, then after the Vance vs. Zhang match, Saito and Soh were paired and featured, but chose to draw about five minutes into the round instead of battling. Thankfully, that means there will be no intentional draws this round, since action is still demanded from both players in order to ensure a Top 8 berth.

The formerly banned Tomoharu Saito is having a very good year. In March he made his first top 4 appearance at a Pro Tour with friends Tomohiro Kaji and Kenji Tsumura as part of One Spin, and he has posted solid performances at a number of Grand Prix throughout the season, though his success on the Pro Tour hasn't had many extra highlights beyond the teams competition. With a draw in the last round against friend Terry Soh, he set himself up to be able to go 1-1 in the last two rounds and earn another Top 8 appearance. Young David Zhao is also having a good year. He qualified for Worlds via the Australian National Team earlier this year and the amateur is poised for his first Grand Prix Top 8 appearance if he can get one more win in the next two rounds. He just has to hope his love of the little red men, an archetype generally shunned after a dismal showing in Los Angeles, does not let him down.

Saito took a pair of mulligans to start the match, but came flying out of the gates with Ornithopter and Arcbound Ravager beatdown. Zhao started slowly, but reaped huge advantage from Goblin Ringleader and earned a scoop from Saito with a turn 5 Siege-Gang Commander, since the Japanese player had mana screwed himself to keep his Ravager alive and then failed to draw another. 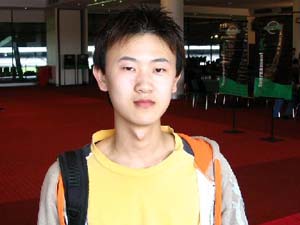 Saito groaned to start game 2, as his first turn Cabal Therapy whiffed on Goblin Warchief, revealing Kataki, Disenchant, Flametongue Kavu, Goblin Piledriver, and mana to cast each from Zhao's hand. Ornithopter provided the sacrificial body necessary to rip Kataki from Zhao's hand and Engineered Plague on the following turn looked to give Saito a huge advantage on the board, though is could always be Disenchanted at will. Of course, Saito couldn't plan for Zhao to rip another Kataki right off the top and send his plans careening out of control. Disenchant on the Plague followed by Goblin Warchief and Goblin Piledriver earned an immediate extension of the hand from Saito, leaving the spiky-haired Japanese player shaking his head and grumbling, "Boros… Goblins? Boros…" 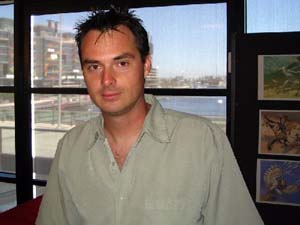 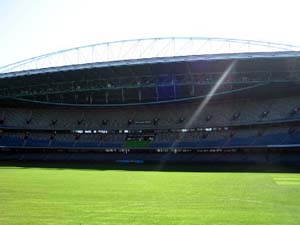 This site is only slightly less ironic because the event is being held in Australia. 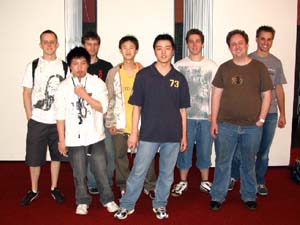 Posted in Event Coverage on November 6, 2005