1 Strands of Undeath 3 Pillory of the Sleepless

4 Ghost Council of Orzhova 4 Pillory of the Sleepless 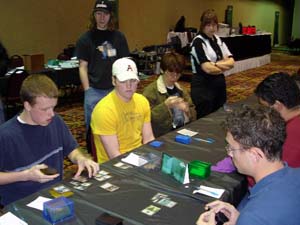 Who are Faddy Josh?

This is just a guess, but I'm certain there are more pleasant things to wake up to than the smiling face of Antonino De Rosa. Unfortunately for Tim Bulger and his Faddy Josh teammates, that's exactly what they were faced with this morning

So who are Faddy Josh? Fans of the late, great Tim Aten are probably already aware of names like TBulge, Taka, and Ziegler, but the short answer are that they are a group of players from the University of Minnesota who have been playing in the same Magic circle for years. Tim Bulger is described as "the best player in his group" and can be found in the Top 8 of most local PTQs when he's not playing with Kobolds at the kitchen table. Brian Ziegler is a twin who abandoned his sometimes-Magic-playing brother for actual good players this weekend. Everybody loves a Ziegler. As for Taka Sato, he's the Japanese translator for StarCityGames.com, and happens to be about as crazy as they come (but mostly in a good way). He was part of the Worlds karaoke party that nearly submarined the Japanese National Team's chances at the team title.

As for the match itself, De Rosa lost to Shining Shoal action with Wildfire on the stack, while Josh Ravitz dispatched Sato's Gruul deck with little trouble. This left the entire match riding on the outcome of Lieberman vs. Ziegler in a tough Heartbeat mirror. Lieberman apparently made a pretty bad mistake in game 1 and then lost game 3 as well, giving Faddy Josh the match win.

Nobody beats a Sonne at a GP… except Richie Hoaen. I observed this to Jon and opponent Takanobu Sato as I was sitting down to their feature match when Sonne flashed a smile and said, "Yeah, and I can't get paired against Richie this weekend." He was referring to the fact that he and Hoaen were in different seats this time around, so they couldn't possibly play each other. 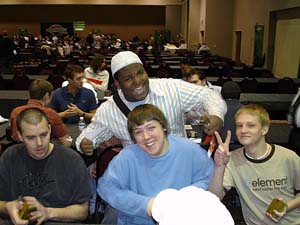 Cedric Phillips and his willing victims.

After a pair of mulligans, Sato led off with three Forests in a row while Sonne' deck went right according to plan, casting Dark Confidant on turn 2, and then kicking a man while he was down by casting Shrieking Grotesque to make Sato discard further. Another Grotesque a turn later saw Sato scoop up his cards as they headed into game 2.

Incredibly enough, Chris McDaniel managed to lose game 1 to Bulger even faster than Sato, keeping a one-land + Sensei's Divining Top hand post-mulligan and then failing to draw a second land. Ziegler managed to post a game 1 win right after the rest, raking in game 1 of the Heartbeat vs. Zoo matchup.

Sato again took a mulligan to start game 2, and had no plays before a turn 3 Burning-Tree Shaman. A second Burning-Tree followed a turn later, but this was surely not the start Sato was hoping for. Sonne blew him out a turn later, attacking with a Descendant of Kiyomaro and then Mortifying a Shaman when Sato chose to double-block. The rest of the match was purely perfunctory, as Sonne put the first match win on the board for the bikeless wonders.

Sonne's victory ended up not mattering, as the rest of Faddy Josh was busy demolishing their opponents in seats A and B, giving Faddy Josh the win and a probably berth in the Top 4. Faddy Josh now get to play kingmakers for three more rounds, which should be interesting because there are a lot of other Minnesota-based teams still in the hunt for the elimination rounds. That's in addition to the star power teams like Cedric Phillips…, De Rosa's team, and the squad of Maher, Efro, and Hoaen, who have moved up to second place with three rounds to go.

1 Oyobi, Who Split the Heavens
50 Cards 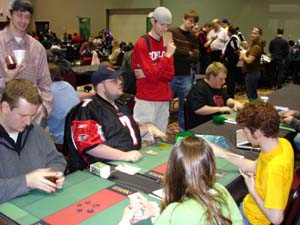 Bob and Efro look to lock up another Top 4 appearance

Eric Froehlich is the very definition of acerbic, setting off sarcasm detectors with practically every sentence he utters. The owner of a World Series of Poker bracelet, Efro has a magical talent of finding teammates that are quite frequently the best in the game at the time he plays with him. The big man with the biting sense of humor has posted three previous Top 4s in team competitions (two of them coming with Jonny magic by his side) and he's poised to do it again here this weekend, provided he, Hoaen, and The Great One can muster one more win in the next two rounds. Ben Goodman is the new kid on the block, and is here because Melissa De Tora and Brian Lynch's original teammate (Joseph Kambourakis) ran afoul of the DCI again, leaving the New England pair scrambling for a third. Goodman was happy to fill in (and to be fair, Mouth covered part of his plane ticket) and though they are out of Top 4 contention, his team still has a good chance to earn one of the slots to Charleston, provided they can get past the behemoth of a Magic resume standing in their way.

Goodman mulliganned his first hand, but kept six, leading off with a Dark Confidant on turn 2 to Froehlich's Isamaru, Hound of Konda and Kami of Ancient Law. Mortify took down Bobby and the game was officially on.

Enfeeblement killed off Froehlich's Koala, as Goodman gave a wink and said, "Maindeck." Mortify took down Tallowisp, but Goodman responded by using Sickening Shoal on Isamaru, removing Pillory of the Sleepless and tutoring up another one before the Wisp hit the graveyard. Action was now fast and furious, with both players controlling Maher's and the real (and considerably better looking) Bob sitting right next to them, watching dueling versions of himself attack and block. The Pillory life loss plus Bob damage and Ghost Council for Goodman eventually did Froehlich in, putting the leprechaun up a game in the fun house mirror.

Maher won his game against De Tora, but Hoaen fell to the Mizzet Control deck piloted by Brian Lynch, giving the Mouth Memorial an early lead.

Goodman got his engine online right away for game 2, casting Tallowisp followed by Plagued Rusalka, followed by Tallowisp, fetching Enfeeblement and Pillory from his deck. This wasn't quite as good as it seemed though, because Froehlich had a double Bob start with a side of Jitte. Unfortunately for the big man, the Maher card advantage engine comes at a price, and Froehlich was down to eight by the time he Wrathed the board clear. Unfortunately for Goodman, unanswered Paladin en-Vec plus a Jitte basically beats his whole deck, and that's exactly what happened, as Efro beat down and Goodman drew a bunch of lands and spells that couldn't do a thing about the buff, protected white knight.

Turn 4 Persecute White hit only one card from Efro, revealing an Umezawa's Jitte and three lands along with the Koala that went to the graveyard. Froehlich's Jitte equipped Hand of Honor on the next turn and swung, killing Goodman's Confidant, but Pithing Needle naming Jitte a turn later shut down that funny business.

Ghost Council from Froehlich after a lengthy stalemate just gave Goodman a target for his enchantments in hand, but Efro had two Phyrexian Arenas going now, giving him three cards a turn, and Ghost Council is particularly good at shedding unwanted auras. 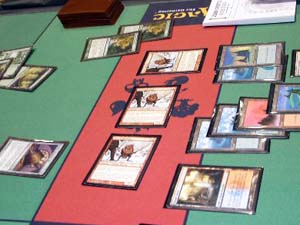 You can't stop Akki Underling beatdown, you can only hope to contain it

All three matches at this point had gone to a third game, with De Tora putting away Maher in a close one, and Hoaen doing the impossible by actually resolving an Invoke the Firemind for twelve cards against Lynch's grip full of counterspells. He was dead on the board the next turn from … Akki Underling beatdown? Are you kidding? No, Lynch was not, and we even have the picture to prove it. In fact, Underling beatdown was exactly what put away the match for Lynch in game 3, giving the Mouth Memorial Society a victory without any help from Goodman.

With two Arenas on the board and a healthy life total, it looked as if Froehlich had the game on lock, but Efro drew an impossibly long string of lands with his two Arenas, dying to Arena damage. Goodman was at 3 life during this time, essentially waiting to die, and looking pleasantly surprised when the kill never came. 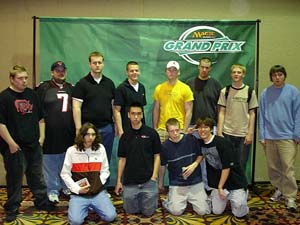 Faddy Josh have been in the Top 4 for three rounds now, and with beneficiary scoops from round 13 opponents, both FJB and 4815162342 also sealed up a spot for the elimination rounds, leaving The Top 8 vs. Cedric Phillips Stole My Bike as the only outstanding match that mattered. Sonne and Pelcak both won their matches quickly, giving CPSMB the final Top 4 spot, and setting up two brackets of experience versus youth. Maher, Hoaen, and Efro felt they had a very solid matchup advantage against Kyle Goodman's crew, while the battle between Faddy Josh and CPSMB looked to be a tossup. A star-studded finals is entirely possible, but the kids this week have proven very hard to beat, and after their performance this weekend, I'd find it hard to bet against Faddy Josh in any match.