Judges rarely get the recognition they deserve, so we're always happy to give them a little feature when we can get them to pose for the cameras after a hard days work with organizing the event, registering players, answering rules questions, attending seminars, and dozens of other tasks. These are the guys that really make the whole thing work, so treat them nice - they are doing this voluntarily to give you a good time. 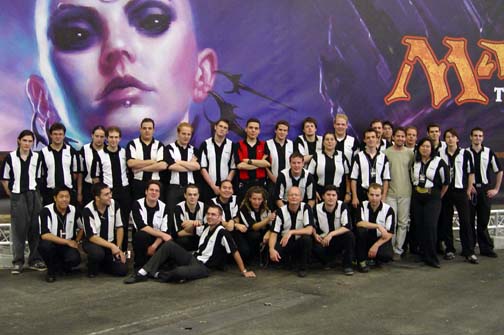 The Judging Staff of GP Toulouse 06 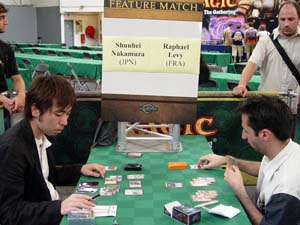 Shuhei told me he really likes feature matches - when his deck is good. Judging from the big smile he brought to the table, this was the case today. And judging from his 10-0 score, it had been the case yesterday as well.

None of the players showed anything impressive in the first game though - they played a few random dorks, and the game was decided early when Raphael managed to get a four for one trade thanks to Carom.

Raphael tried for some card advantage in Game 2 as well. His Steamcore Weird was essentially countered by Withstand, but Compulsive Research plus Izzet Chronarch kept his hand full. Shuhei got a little Grey Ogre offense going while Raphael was busy with the card drawing, but when it got just the tiniest bit dangerous, he had Azorius Herald to give him back some life points. Raphael then managed to play Ordruun Commando and Flame-Kin Zealot in the same turn, and kicked Shuhei into the lower single digits. Shuhei had a Repeal, but in the end, that didn't help him much.

Shuhei lost his first game, but is still looking like a top 8 candidate. With both players at 10-1, they could meet again in the next round. 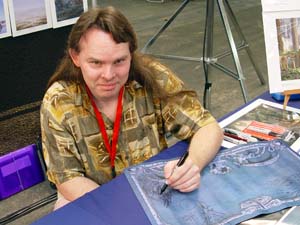 Two artists were supposed to show up this weekend, but unfortunately, Wayne England had a minor accident, so he couldn't make it. The fans were still happy, as one of their favorites, Rob Alexander, did make it to the Grand Prix, despite a few problems on his flight from Seattle to Paris.

Rob Alexander has been doing art for Magic since the beginning, and his most famous pieces are still the original dual lands. These are also the cards that he gets to sign most often. Living on a farm in the middle of nowhere, he really enjoys the close contact to the people that love his work when he gets to go to events like this one, despite having to sign approximately 10.000 cards on a weekend.

He also did some works for a few computer games that may or may not be released in the future, but unfortunately he can't talk about it yet - although I caught him mumbling something about "Sony's new Everquest."

If you want to see more of his art, or maybe even order some of it, you can visit his homepage here. 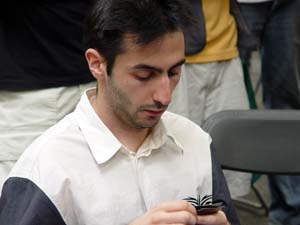 Raphael got some good Gruul cards, but opened no superbombs

Raphael Levy had had a good weekend until this point. He was at the top of the standing with a 10-1 score, and probably only needed three or four points to make it to his eleventh Grand Prix top 8.

His first pack came down to a decision between Bottled Cloister and Ribbons of Night, and while the Ribbons might be better, he kept the Cloister to avoid choosing colors too soon. The second booster was much weaker, and he took Cleansing Beam over two Karoo lands. Golgari Guildmage over Conclave Equenaut was his next choice. I was sure he would take the Bramble Elemental from his fourth booster, but he chose Elvish Skysweeper instead. A seventh pick Brightflame may not have been playable due to color constraints, but Raphael took it anyway, just in case.

At the end of Ravnica, Raphael was heavily into green, and it looked like red would be a second color.

Guildpact started perfectly with Savage Twister in booster one and Streetbreaker Wurm in booster two. The card quality then declined heavily, due to the fact that Marijn Lybaert on his left had opened Burning-Tree Shaman, which meant that he was taking Gruul as well. Raphael managed to get Ghor-Clan Savage and Wildsize, but the rest of the Guildpact cards were not what he had hoped for.

Dissension was even worse. He picked up Seal of Fire and Cackling Flames early, but was unwilling or unable to select a third color, so he was stuck with the sub-par monocolored cards.

In the end, Raphael had a deck that was below average in card quality, but with only two colors, he could expect his draws to be much smoother than his opponents'. As he didn't need to win the table, I thought it was very reasonable to assume that he would make it to the play-offs. 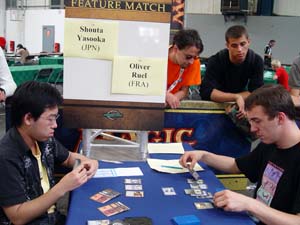 Olivier started the round by sending off some minions to calculate whether he could use a draw for anything. Both players had 30 points, and 34 would make it for sure, but Olivier had the best tiebreakers, and it looked like one person at 33 would make it as well. As both thought they could beat pretty much anyone else in the pod, a draw was an option. However, Olivier's minion returned and advised him to play, so luckily for me, I hadn't moved in vain.

Olivier didn't get a very good start, with just Transluminant and Silhana Starfletcher. Shouta wasn't much faster to get things on the board, but with the good old Compulsive Research - Izzet Chronarch combo, he got far ahead on the card advantage front. Keening Banshee and Voyager Staff worked together as well, and Olivier found himself in a tough position. He used Helium Squirter to make a few flyers, but Shouta could just trade one for one, and in the end, his extra cards gave him the victory.

Shouta's first two plays this turn were Swamp and Orzhov Basilica. Which seemed decent, except that Olivier had Aquastrand Spider and Vedalken Plotter, and suddenly Shouta found himself way behind both in creatures and mana. To make it worse, he didn't have the blue mana he needed to play Compulsive Research. By the time he got it, he had so few life points left that he had to make some unfavorable trades, which put him even further behind. He conceded when the situation became too hopeless.

Olivier then got word that some of the other results would make it better to take the draw, as there now was a fifty percent chance of getting a concession in the next round. Shouta accepted as well, so I could drag myself back to the stage and report an ID anyway.