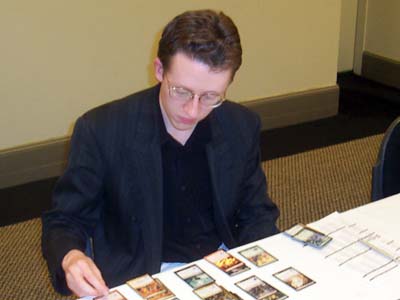 Going into the second draft, only Daniel Piechnick and Jarron Puszet remained undefeated. Not only that, but they were sitting next to each other in the draft. Man, a reporter would have to be in a coma to pass up an opportunity like this up, and I hear Ted Knutson once even came out of a coma to cover something similar.

Things seemed to start out nicely for both players. Piechnick snapped up the Golgari goodness, and passed a bunch of Boros to Puszet downwind of him. For his third pick, Piechnick toyed with the idea of drafting a Mindmoil, which is considerably underrated by many, but instead drafted a Dimir House Guard. Luckily, the Mindmoil went on a wee journey all the way around the table, and happily landed back in Piechnick's pile where it belonged.

In pack two, Puszet branched into Black for some of the Orzhov, and Piechnick naturally supplemented his collection with the help of the Gruul. But of course, that means that they would be fighting over the Rakdos in pack three, and Piechnick would get first bite at anything that swung past. This included a fifth pick Wrecking Ball. 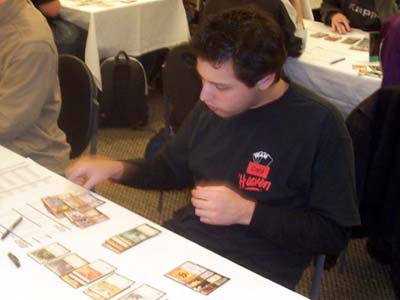 However, both players seemed content with their drafts, and set off for the night to get some rest and maybe a little practice before their inevitable match up in the morning.

And then, on Sunday morning, our two protagonists (because we cannot take sides) sat down to see who would remain the only undefeated player going into round eight. Things started well for Puszet, who dropped a War-Torch Goblin and a Skyknight Legionnaire and went to work on Piechnick's life total. Unfortunately, Piechnick stalled on two Swamps until his fifth turn. By then, his Douse in Gloom was too little, too late, and Puszet finished him with a Cackling Flames.

Both players managed to start the second game exactly the same way as the first, which got a giggle or two out of everyone involved. This time however, Piechnick didn't miss a land drop, and soon had a Rakdos Ickspitter in play making Puszet's life difficult for him. Piechnick continued to curve out, building up to a Golgari Rotwurm and topping it off with an Avatar of Discord. All Puszet could say was "good game." 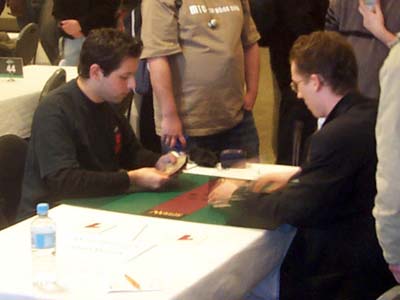 Piechnick pondered his hand for Game 3 before throwing it back. It was basically three Swamps and a Vesper Ghoul, which wouldn't have been nearly fast enough to compete with Puszet's aggressive deck, especially on the draw. He kept his six-card hand, and soon had a Shambling Shell and a Verdant Eidolon ready to get in the way of Puszet's small men. Puszet kept advancing over the top with his Utvara Scalper, while his Skyknight Legionnaire and multiple Screeching Griffins fell away to Piechnick's wall of removal.

Eventually all that remained on the board was Puszet's Scalper, and Piechnick's Eidolon and a Dryad Sophisticate, which began to play catch up on Puszet's life total. Piechnick's Golgari Rotwurm ate a Pillory of the Sleepless, but he dredged back his Shambling Shell to finish the race before Puszet could draw any burn to snatch victory. The title of sole undefeated player goes to Daniel Piechnick.

It's not blisterguy event coverage if it doesn't include a photo montage! I say this because when I ask people what they like best about anything I do, they always tell me that they like the pictures the best. I choose not to read between the lines with this one. 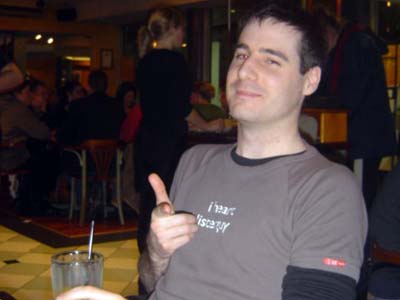 Hello Canberra! This is me out for dinner with some of the guys the night before the big event. Apparently 'hello Canberra!' is a traditional greeting at the Australian National Champs, and can be heard about the town every year. 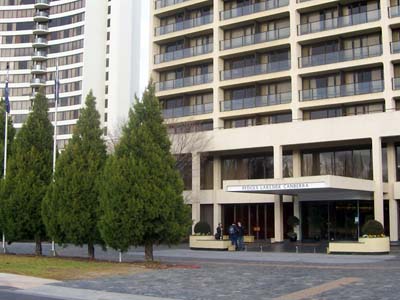 Where we're playing and staying. 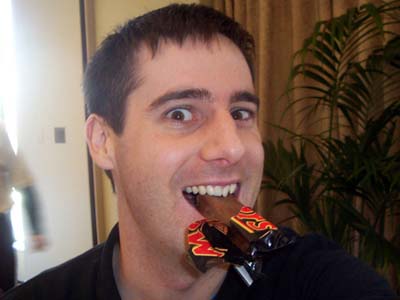 More chocolate! Fear not, far more than that paltry amount has been consumed by myself this weekend.

This is the room without players. 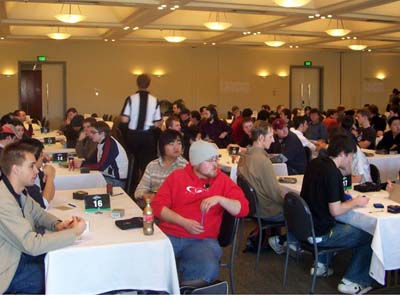 This is the room with players. 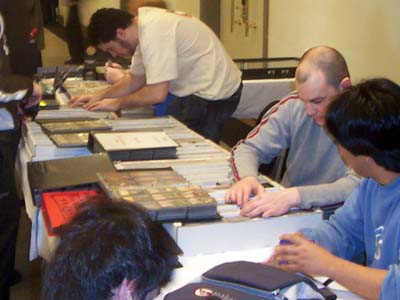 The dealers, selling their stuff. 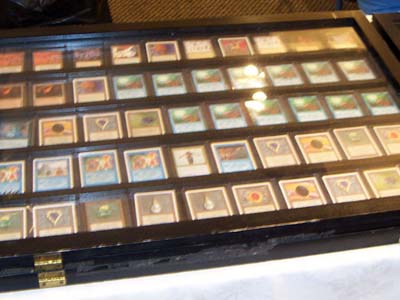 And what stuff they sell! My oh my. 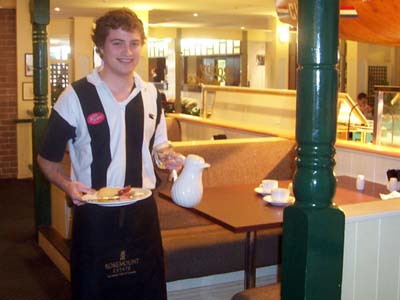 The wait staff in the restaurant downstairs wear somewhat …familiar clothes. It can lead to come confusion. 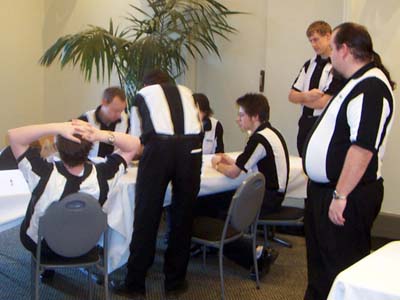 Like, no matter how many times I asked these ones for a side order of bacon, none of them batted an eye-lid. 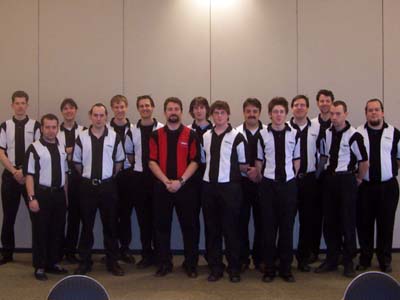 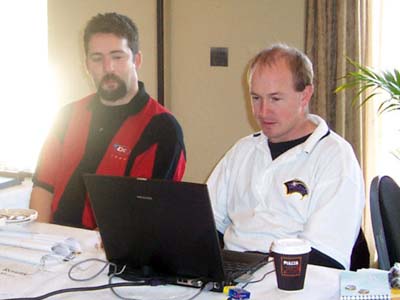 These men are making sure the tournament runs smoothly. The last thing I saw on that laptop was the Magic Online update screen… 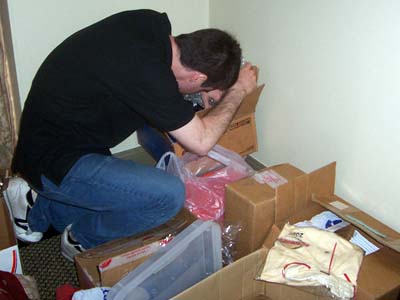 'Ello, ello, ello. What have we here? 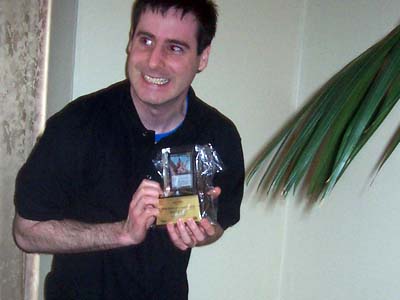 By crikey, he's found something! 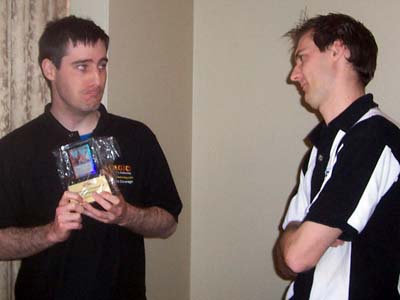 As we near the cut off to the top 8, the field gets smaller and smaller (well yes, it can't exactly get any bigger…). The remaining players are no doubt beginning to feel the pressure as they once again whip out their standard decks for some one on one duel action. Seated in the feature match area this round is Michael Kotchoff, who was a member of the Australian National team in 2004, and Justin Cheung, who as previously mentioned this weekend, is certainly no slouch either. 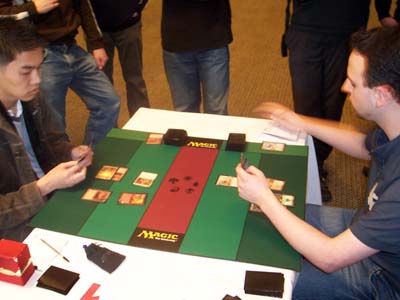 Cheung appeared to misread his opponent's opening plays of Steam Vents, Island and pointed a couple of quick Volcanic Hammers to the dome, probably thinking Kotchoff was playing something like Izzetron, Izzet Control or Magnivore. Kotchoff then played out a Forest and a Trygon Predator, which conveniently has three toughness, which matches those Volcanic Hammers perfectly. Shame that. Anyway, Cheung soon added an Eight-and-a-Half-Tails and an Isamaru to the table, but they couldn't quite keep up with Kotchoff's Rumbling Slum and Plaxcaster Frogling. When Kotchoff went for the lethal Char, Cheung tried to stave off death, and probably pull Kotchoff within "untap and kill" range with a Lightning Helix, only to see it fall victim to a Remand.

Game 2 was a big bash up over Equipment. Cheung led with Isamaru and Umezawa's Jitte, only to be presented with another Trygon Predator to deal with. Manriki-Gusari's (or is it Manriki-Gusarai?) made an appearance, and small cardboard men were pitching face-first into the table cloth to the left and the right. In the end, Kotchoff was simply unable to kill a Paladin en-Vec and these two plucky lads were off to Game 3.

Kotchoff practically threw all of his weight on the table for the last game. A turn three Predator, turn four Rumbling Slum and another one on turn five to replace the one Cheung had somehow managed to burn to a crisp the turn before. Backpedaling all of the way, Cheung still managed to keep Kotchoff's life total within range, and managed to pull a surprise win out from under Kotchoff's feet with an end of turn Lightning Helix, followed by a Threaten on a Rumbling Slum.

Going into the final round, this could very well have been the last match either Cameron Veigel or Andrew Eckermann would play today. Both players were obviously looking for the win that will carry them into the playoffs, and a loss, well, the less said about that the better.

"I've won a lot of rolls this weekend" Veigel offered as his six trumped Eckermann's four. But that wasn't all he would have to be apologetic about, as all Eckermann could manage in Game 1 was an Isamaru, Hound of Konda, and a couple of lands. By the time he drew another Swamp, Veigel was already beating down with a Court Hussar and a Kokusho, the Evening Star.

Game 2 was a much more involved affair. Eckermann took control of the board with a Ghost Council of Orzhova holding a Jitte belonging to one Tetsuo J. Umezawa, while Veigel threw many a Kokusho and Skeletal Vampire in front of it to prevent becoming a stain on the venue floor. (We didn't want to be on the receiving end of that cleaning bill). Eventually, Veigel got enough land into play that he could start chewing up his chumps with his Miren, the Moaning Well, which handled the Jitte nicely.

"In your second main phase," uttered Eckermann, before sacrificing one of his shmoes to his Ghost Council.
"In response, and with that Promise of Bunrei trigger still on the stack, I'll Mortify your Ghost Council."

Eckermann surveyed his board, trying to find another victim for his Ghost Council, and came up wanting. Like Eckermann, the Ghost Council was Mortified and was replaced by pile of Soldiers. Veigel untapped, and dropped an Angel of Despair on top of the Jitte. Eckermann suddenly found himself with four 1/1s facing a 5/5 flyer, and was soon extending his hand to Veigel, who now advances to the top 8 playoffs.