1 Magus of the Disk 1 Evangelize 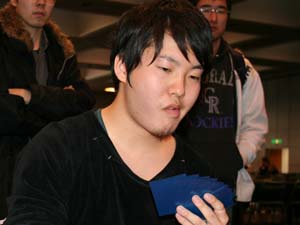 Yuusuke Iwasaki It's practically tradition to feature the people at the top of the standings at the start of day two, and Japan being a country rich in tradition, I see no good reason to change that now. Conveniently, Yuusuke Iwasaki and Naoki Shimizu are the two remaining undefeated players, so there's no having to decide which match to cover either.

Iwasaki started out by gathering resources for his Blue/Green Urzatron deck, accelerating with a Simic Signet and drawing deeper with a Harmonize. Shimizu's game plan instead involved a little disruption here, a little board control there, and a great deal of gaining unbounded amounts of life with the Crypt Champion, Saffi Eriksdotter and Essence Warden Combo. Shimizu denied Iwasaki a Chord of Calling with a Castigate, but Iwasaki's Wall of Roots was preventing him from establishing much of a clock. Before long, Iwasaki had found another Chord and had used it to power out a Brine Elemental. He then flipped up a Vesuvan Shapeshifter to lock down Shimizu, who quickly packed up the game. 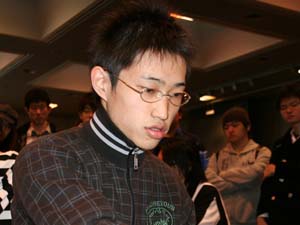 Naoki Shimizu Shimizu started Game 2 about as badly as anyone could hope for, with a mulligan to four. At around the five-card mark, he was seriously lamenting the fact he hadn't kept his original seven, laughing and shaking his head. Despite this setback, he still showed signs of getting his combo going in the face of Iwasaki's Thelonite Hermit attack. When Shimizu started going off, Iwasaki revealed that one of his morphs was a Shapeshifter, copying the Essence Warden. Instead of continuing the Saffi/Champion loop, Shimizu instead elected to reanimate an Orzhov Pontiff, wiping Iwasaki's attack force off the board.

Iwasaki rallied with a Chord of Calling on a Deadwood Treefolk, getting back a pair of Shapeshifters, but found himself unable to copy the Warden when Shimizu again went off, recording his life total as 100 to the power of 26. However, with the clock ticking down, he was unable to actually kill Iwasaki, who went on to win the match one nil.

Some matches are over very quickly, often because one player happens to be playing an aggressive deck, and gets a great start. Other times however, it can just be that the cards didn't come out right, and that's just how it goes.

Both players were playing very mana hungry decks, Kaji with Izzetron and Kitayama with Solar Flare. Game 1 went exactly as Kitayama would have like it to have. Both players playing out their mana, while Kitayama throws large threats at Kaji, who in turn tries to fend them off while getting a threat of his own. It started with a Phyrexian Totem and an Angel of Despair, both of which can be taken care of by Bogardan Hellkite, but finished with an Akroma, Angel of Wrath, which can't.

Game 2 was an even more one-sided afair. Kitayama started out digging with a Compulsive Research, while Kaji just stopped playing lands after his second, and started discarding. Kaji eventually found a third land, playing a Steam Vents untapped, representing a Cancel. Kitayama wasn't fooled however, and pointed a Persecute at Kaji anyway. Kaji just sighed and gathered up his cards.

Makihito Mihara We assumed yesterday that Makihito Mihara would still be playing the deck that won him the World Champs at the end of last year. However, it appears he has traded in his Dragonstorms for Dralnus, the quiet favorite to come out of the same tournament and take Magic Online by storm over the last few months.

Mihara started out with a Watery Grave, and waited to see what his opponent, Hiroto Yasutomi had mulliganed into. An Elves of Deep Shadow later, and everyone knew what kind of thing to expect from there. Sure enough, Dark Confidant soon followed, and an Essence Warden completed the picture. Yasutomi was clearly playing the Saffi Eriksdotter and Crypt Champion Combo deck. Mihara used a Darkblast to control the crowd while gradually moving the game towards the point where for a control deck, winning is pretty much inevitable. Yasutomi failed to mount much of an offensive, and eventually Dralnu, Lich Lord came down and sealed the deal.

For Yasutomi to stand a chance in the face of a Dralnu Control deck, he needs to come out hard and fast, which is exactly what he did for Game 2. Before Mihara could stop them, he was taking a beating from both Saffi Eriksdotter and a Dark Confidant, who was also feeding Yasutomi more fuel for the fire. A Chord of Calling for a Hypnotic Specter really but Mihara in a bind, forcing him to try to Damnation the board clean, only to see Saffi save the Specter. Another Specter soon joined the first before Mihara again found and utilized a Damnation. Yasutomi hit right back with a Grim Harvest, much to Mihara's disbelief. The hits kept coming until the World Champ could take no more, and they were on to Game 3. 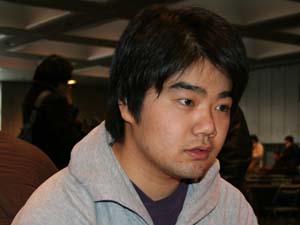 Hiroto Yasutomi For Yasutomi to stand no chance in the face of a Dralnu Control deck, he needs to mulligan again and have no business spells until his fourth turn. Mihara deferred Yasutomi's attempt to start a rumble with Remand, and at the end of Yasutomi's fifth turn, he dropped a Teferi, Mage of Zhalfir into play. Mystical Teachings then fetched a Skeletal Vampire, which also came into play at the end of turn, leaving Mihara's man up when it needed to be. The Vampire and its team of bats swung through the air, and soon had Yasutomi in Mouth of Ronom range. When Yasutomi's Dark Confidant failed to kill its owner, despite Mihara cheering it on, Mihara finished the match by pointing to the Mouth and his flying squadron with a grin on his face.

Because some pictures just have to be seen. I mean, I have more pictures, but they are nothing compared to this one. Well, the one we have at the top of the page right now is pretty good, but that won't last. This one is just… this one is just so… 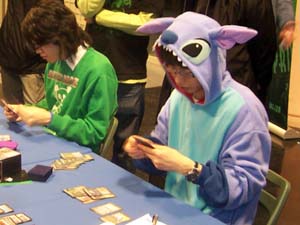 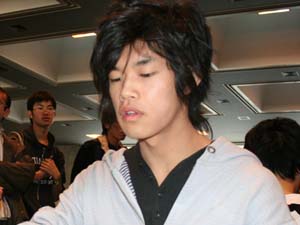 Jun Takahashi It's the final round, and there are many, many players sitting on 33 points. Jun Ya Takahashi and Koutarou Ootsuka both ran over to check their tie-breakers one more time, but it was clear that they need to play, there was no easy way in from here.

Ootsuka got the ball rolling with a mulligan on the draw, while Takahashi lead with a Breeding Pool and a Birds of Paradise. Ootsuka's Godless Shrine was met with a Delirium Skeins, which showed Takahashi as playing the dredge deck, the cards Ootsuka pitched to the discard spell revealed he was playing Solar Flare.

Takahashi first two attempts at a Golgari Grave-Troll were met with Remands, but that generally only delays the inevitable. The Grave-Troll finally landed, and Ootsuka Wrathed it away. The Troll came out again and Skeletal Vampire was deployed in opposition. For five mana a turn, the Vampire would be able to hold off a pair of monsters if need be. With Takahashi's library getting smaller and smaller by the minute, he needed to increase his number of threats to push past the Vampire. Ootsuka had a Faith's Fetters for the Grave-Troll, but Takahashi managed to Darkblast the remaining bat before Ootsuka could replenish his defense force, and took Game 1 with a Svogthos, the Restless Tomb with precious few cards left in his library.

It was Takahashi's turn to mulligan in Game 2, complete with forbidden peek. Not liking the six cards any better than the seven, he peeked again and opted for five cards instead. That said, his deck is one that can handle going that low with the right cards. All it would take would be a dredge enabler, and maybe a Life From the Loam and he would be off to the races. However, by the time Ootsuka had a Shadowmage Infiltrator in play, Takahashi was still stuck on a lone Watery Grave. He then found a Simic Growth Chamber, and managed to discard a Stinkweed Imp at the end of his turn because of it, but was soon sent packing by a quick Phyrexian Totem before he could cause much trouble with the pint-sized flyer. 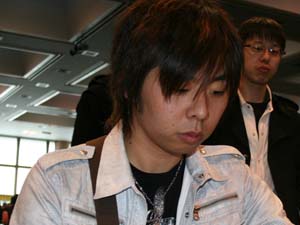 Koutarou Ootsuka Going in to the last game, both players kept their hands. This time Takahashi got the start he wanted with a turn two Magus of the Bazaar, while Ootsuka dug through his deck with a Compulsive Research. Within a couple of turns, Takahashi had almost half of his deck in the graveyard and was certainly looking at Going Large very soon. Not only that, but in doing so he had revealed some tech; an Academy Ruins that could be used to retrieve a Loxodon Warhammer. Let's see the bats block that.

Ootsuka accelerated out an Angel of Despair, taking out Takahashi's Golgari Rot Farm, hoping to keep the dredge deck from getting it's monsters online. The Angel looked like it would take quite a chuck out of Takahashi's health, despite having the ability to dredge back a Stinkweed Imp to stop the hurting. It wasn't like he didn't know it was there, he was toying with the idea of bringing it back, but would instead dredge a Life From the Loam or a Nightmare Void, being proactive and hoping the two Firemane Angels in his Graveyard would keep him afloat. And it worked, at the very last moment possible, Takahashi activated and swung with a lethal Svogthos the turn before Ootsuka could finish him off with the Angel. All that Takahashi can do now is hope that his tiebreakers hold up.