As is often the case at the top draft table, you’ll often find it overpopulated by names we’ve seen grace these pages in the past. In this case they were even all seated on one side of the table. From left to right, although because I’m in Japan I’m tempted to throw the photo on it’s side and go from bottom to top, Katsuhiro Mori, Kenji Tsumura, Akira Asahara and Kazuya Mitamura. Between them there are no less than 8 Pro Tour top 8’s and 28 Grand Prix top 8’s.

Because I admit, I’m a bit of a Kenji fan, I decided to stand behind him during this draft. I dunno, there’s something about him. He loves the game, he plays fair and I’m pretty sure I could chuck him in my backpack and carry him around all day without breaking a sweat. Last year at Grand Prix-Kuala Lumpur, Kenji proved to the world that not only could he conquer in constructed, but he’d also become somewhat of a limited powerhouse too. Kenji’s results in the last month or two have seemed to be dropping a little, and eye-witnesses have even stated that the grueling Grand Prix schedule this year may have been too much for him. However, as he proved yesterday, a solid sealed deck pool and the home turf advantage seems to have invigorated Kenji who finished day one undefeated. 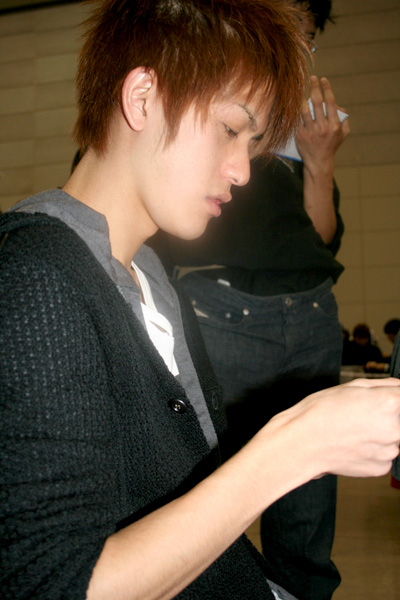 First pick, first pack, most Pro players agree that they’d most like to find a Nameless Inversion waiting for them in the common slots. Thankfully for us, there wasn’t one in Kenji’s first pack so he actually had a decision to make between Warren Pilferers, Veteran of the Depths, Avian Changeling and Aethersnipe. While the common consensus is that Nameless Inversion is the best common in Lorwyn limited, it’s also agreed that Blue is the best color. Of the above cards, the Æthersnipe certainly seemed to be the most powerful, so he nabbed that and set up some white players downstream of him. The second pack gave him another Æthersnipe over another Avian Changeling, and the third pack a third Æthersnipe over another Pilferer. To Kenji’s right, Katsuhiro Mori had set himself up in Red with a first pick Sunrise Sovereign and stayed well out of Kenji’s way. The fourth pack gave Kenji his second color, moving into White for Sygg, River Guide, no doubt keenly aware that his draft was looking decidedly top-heavy right off the bat. To fill out pack one, he picked up a Kinsbaile Balloonist and a Neck Snap.

The second pack gave Kenji a Purity. Ordinarily an easy decision, but his deck already had a trio of six drops, but it was basically far better than they alternative, a Judge of Currents, or branching into Red for either Tarfire or Lash Out, or Black for Final Revels. The second pack had a Changeling Hero which he wasted no time in grabbing, passing another Tarfire to Katsuhiro who was definitely reaping the rewards of his positioning and passing Kenji the Æthersnipes. From here Kenji place a priority on two- to three-drops, wanting to fill out the lower registers of his deck, picking a Kithkin Greatheart and then a Kinsbaile Skirmisher, the 2/2 over yet another Æthersnipe. By the end of the second pack, Kenji had picked up quite a few two mana men with two power, and with a couple of them being Kithkin Greathearts, would no doubt now be looking to pick up a Changeling or two. 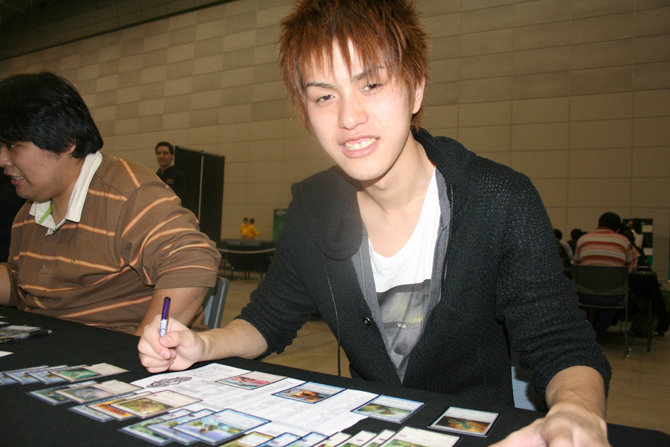 The final pack had a Silvergill Douser and yes, another Æthersnipe, a Streambed Aquitects and a third Greatheart. He grabbed a Turtleshell Changeling fifth pick, to help power up the Greathearts and filled in the last few gaps in his curve with a Hillcomber Giant and an Inkfathom Divers, and a Wings of Velis Vel. Kenji seemed very pleased with his deck. He had a powerful top end, especially if he could play back-to-back Æthersnipes, and plenty of early attackers to menace someone with a slow start. Personally I would have prefered a second Wings of Velis Vel in the deck, as they would be a beating with his many Kithkin Greathearts. However, he had opted to pick up a few more two-drops over them in pack two and only ended up with the one in the third pack.

Kenji Tsumura’s deck looks like a real heavy-hitter, just as long as it can hit its sixth mana. If Jun Young Park couldn’t beat him down fast enough, he would be crushed under the weight of a handful of Æthersnipes, and maybe even a Purity.

Jun Young came out exactly as he would need to, leading with an Elvish Handservant, and doubling up immediately with a Woodland Changeling and adding a Goldmeadow Harrier to make things difficult. Kenji established a defense behind a Silvergill Douser, a Paperfin Rascal and a Hillcomber Giant, only to have his men dismembered in combat by a Fistful of Force and Briarhorn. A Kithkin Greatheart showed up and a Runed Stalactite transformed the Douser into a Giant to give Kenji a 3/2 first striker. Yet another Fistful of Force put pay to that, and Kenji was very quickly on the back foot. One of his many Æthersnipes stalled the attack briefly, but the Harrier kept the large body out of the picture and Jun Young was soon attacking for the win.

Kenji had the faster start in game two, deploying a Deeptread Merrow and a Kithkin Greatheart on the attack. Jun Young finally had a play on turn four when he planted a Galepowder Mage squarely in front of Kenji’s attackers, only to lose it to a Neck Snap on the following turn. Kenji bounced a land with an Æthersnipe and sent in his two 2/1’s and the 4/4 to face a freshly played Goldmeadow Harrier. Jun Young dropped a Briarhorn into play with his remaining mana, and the pair of them took down the Greatheart and the Merrow. The next turn he won the clash on a Nath’s Elite, and Kenji replied with another Greatheart and a Streambed Aquitects. The Elite took them both down with a Fistful of Force while the Harrier again kept the Æthersnipe occupied. One devastating combat trick after another had put Kenji too far behind. The aftermath of each engagement were still coming for him, the Nath’s Elite large enough to eat most things Kenji could put in front of it and the Briarhorn shortening his life span dramatically. It wasn’t long before Kenji was checking the next card and scooping up his permanents with a smile.

Lunch seemed like such a good idea at the time, but it meant we came back slightly late and the players were six picks into the second draft. I blame TO Ron Foster, or maybe the artist Warren Mahy, but I certainly don't consider myself at fault in any way.

Thankfully, I was able to "Ask the Pro" Raphael Levy who happened to be standing nearby just what Olivier Ruel's early picks were. The first pick offered a Sygg River Guide or a Tar Pitcher, and as Olivier had told me in Brisbane a month ago, his preference for Goblins gave him only one choice. Raphael also pointed out that Sygg slams you directly into Merfolk, and he agreed that Olivier would be unlikely to want to commit to that on his first pick. Second pick was a Dreamspoiler Witches over a Pestermite and a Fallowsage, and third a Mudbutton Torchrunner over another Pestermite. Olivier has also suggested that like many other pro players, he's quite partial to Faeries as well, but clearly the Pestermites weren't going to tempt him away from the first pick Tar Pitcher. 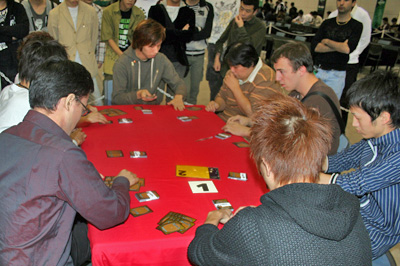 The rest of pack one was relatively unexciting, but pack two offered up quite the conundrum. Sunrise Sovereign, Tarfire and Lash Out. Lash Out is an excellent burn spell, but once you're in Goblins Raphael explained, there's very little better than Tarfire. The Giant is definitely good if you're in that tribe, but this point Olivier was not. Raph was horrified as Oli placed the Giant on top of his pile. Second pick was a Warren Pilferers over a Weed Strangle, which I might have questioned at the Lorwyn Prerelease, but certainly wouldn't now. A third pick Blind-Spot Giant over a Boggart Birth Rite suggested Oli was interested in following his Sovereign for a while, but the fourth pick cut right to the chase; a second Sunrise Sovereign or a second Tar Pitcher?

He chose the Tar Pitcher, which I have to admit, would have been my choice too. From there on it was just a bunch of playable Goblins, punctuated by a first pick last pack Nameless Inversion and a third pick last pack Changeling Berserker. Interestingly enough, whenever there wasn't a playable Goblin card in the pack, Oli always seemed to end up grabbing Hillcomber Giants, as if he was worried about the 3/3 Mountainwalkers ruining his chances at top 8 maybe, who knows? I'm sure he had four or five of them, no doubt they could keep the Sunrise Sovereign company in his sideboard.

Apparently there were some unusual drafting happening during the second draft of the day. While we followed Olivier Ruel's picks, apparently Akira Asahara was experimenting with a Clash deck. He started out going for Merfolk, but found that to be drying up somewhat and picked up a Rebellion of the Flamekin late in pack one. When he found another two of the Clash-triggered Enchantment, he started picking up as many small Blue and Red Clash enablers as he could, and ended up with the following deck. Last I heard, he'd just beaten his round 12 opponent by attacking repeatedly with five or six 3/1 Elemental Tokens.

1 Tar Pitcher 3 Rebellion of the Flamekin

With the playoffs in sight, Olivier Ruel now only needs 4 points over the next two rounds to make it in. Unfortunately his opponent Imagawa Hiromasa needs 6 points to make the top 8, so Olivier won not be getting his intentional draw here. That didn't stop him asking of course, and Imagawa couldn't decline fast enough but at least had the good grace to share a chuckle with us.

Imagawa lead with a Kithkin Harbinger for a Meadowgrain Knight but spent his fourth turn playing Brion Stoutarm, who towered over Olivier's lone Facevaulter. The Goblin made to hide behind Olivier's Moonglove Extract, but he simply played another one and threw them both at the Legendary Giant. Olivier then played out one of his Tar Pitchers, and threatened to take over the game with it. Imagawa retaliated with a Plover Knights, which were big enough to survive the Pitcher, but evidently not Oli's Nameless Inversion.

Another Plover Knights came down, but Oli just played his second Tar Pitcher and threw a pair of expendable Goblins at it. A Changeling Berserker joined Olivier's team and began making short work of Imagawa. A Moonglove Extract took out a Tar Pitcher, but when it was immediately returned by a Warren Pilferers, Imagawa decided he liked his chances better in games two and three.

However, things look even worse for Imagawa in Game 2, who stalled on a pair of plains. Olivier again had his Berserker, but this time Imagawa held it back with a Goldmeadow Harrier. That is until a Tar Pitcher showed up and threw a cousin at it. By now Imagawa had found another Plains, but it wasn't doing him any good as Olivier flooded the table with the Boggart extended family. Oli could only shake his head and apologize as he drew and played his Warren Pilferers, knocking Imagawa out of top 8 contention.