Last night we took a look at the draft on table one, focusing on the point leader Aaron Nicastri. Instrumental to Nicastri’s draft was the co-operation achieved between him and Andrew Vance upstream of him. Vance opened a Silkbind Faerie, considered by many to be one of the best commons in the set, and knowing that Nicastri prefered to draft the kind of deck Silkbind Faerie was perfect in, instead chose to ship it downstream in favor of a Flame Javelin. The Javelin is an excellent first pick in many regards anyway, more so when it’s still perfectly playable if you end up not even playing Red.

It seemed that Vance had managed his draft well, setting himself up as a Mono Red seat, and was rewarded when Nicastri passed him both Firespout and Burn Trail in pack two. Okay, so they were in the same pack, but it certainly could have been worse.

After winning his first match of this draft, Vance was paired down with James Ye, who freely admitted he didn’t so much lose his match, as fail to win it. Apparently he had the win and was telling himself “now win the game, now win the game” but all that had come out of his mouth was “your turn”. It happens to the best of us, I trust you’ll agree.

Vance came out of the gate with an Intimidator Initiate and a Sootstoke Kindler, threatening to make short work of Ye, who’s first man was a Mudbrawler Raiders on turn four. The Initiate meant Vance’s men were still sailing in for dinner. When Ye dropped a Wicker Warcrawler on his next turn and found it on the receiving end of a Smash to Smithereens, all he could say as he picked up his cards was “yeah four lands off the top, not very good.”

Ye again took a few early beats about the face from a Rustrazor Butcher and a Mudbrawler Cohort, and found his Wildslayer Elves brushed aside by a Burn Trail. Thankfully, he followed it up with a Boartusk Liege that managed to stop Vance’s attackers in their tracks. Vance dropped a Spiteful Visions, attempting to take the game to a profitable conclusion, but it managed to feed Ye a Runes of the Deus. Suddenly the Boartusk Liege was trampling through the Red Zone to knock the wind out of Vance’s sails. He drew his cards for the turn, punctuating them with “ow” and “ow” before swinging back half-heartedly. Ye threw a Cultbrand Cinder in front of his attackers and Vance admitted with a chuckle “yeah nah, I got nuthin’.” 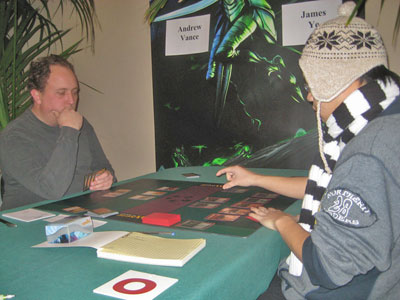 Andrew Vance contemplates his next move

It didn’t look so good for Vance when he attacked with a Rustrazor Butcher on his third turn, but could only play another mountain and pass the turn back. His aggressive red deck was almost entirely dependant on making it’s early drops if it wanted to pressure Ye enough before the large Green creatures could stop them. Ye played a Hungry Spriggan, only to have Vance drop a Power of Fire on his Butcher and take it down. The Butcher is especially good at using the Aura, as wither would mean its pinpoint damage would hang around to make things more problematic for Ye.

However, Ye had the answer as he knocked the Butcher out with a Mercy Killing. “Is it removed from the game?” Vance asked, reading the card. “Oh, just sacrificed. Not that it matters with my deck... err, I mean it really matters with deck!” Vance replaced the Butcher with a Mudbrawler Raiders, and when Ye could only play a fifth land and send the turn back, it looked like Vance could be recovering nicely. He attacked with his Raiders and Elf token and added a Grief Tyrant to his team. Ye finally had another play, and threw down a Roughshod Mentor that traded with the Raiders and a Puncture Bolt on the following turn. He then played his backup, a Foxfire Oak, who hopefully had enough Junk in its Trunk to hold off the army, which had now expanded to include an especially dangerous Tattermunge Duo.

Vance would not be stopped however, and played out hand, a Mudbrawler Cohort and his Spiteful Visions before swinging in with the team. The Oak deflected the Tyrant, but Ye was getting dangerously low on life, dropping to 7 and then 5 after drawing his cards for the turn. A Jaws of Stone for 4 helped his situation, but he still didn’t have enough blockers to stop from falling to 1 life in his next draw step. With Vance not having taken any damage this game from anything other than his Spiteful Visions, there was no way Ye could steal the match from him. He extended his hand to his opponent.

Between games, I decided I should dive head first into the folder containing the 111 standard decklists the players have been using this weekend to give you a breakdown of what’s going on. Sadly, physics dictated that my head did not fit, and decklists went everywhere. After the judges had gotten over their scowling at me and had re-alphabetizing them all, I gently reached into the folder and extracted the decklists one handful at a time.

The Swans Combo deck was something many people talked about when Shadowmoor was released, but few people had actually managed to make work. However, with the addition of what can only be described as the Quick and the Toast mana base, four lads from Sydney managed to cook up a brew they’ve affectionately named “Aussie Assault” that actually seems to be getting results. The Assault is spear-headed by the man at the top of the field, Aaron Nicastri, who was quick to admit that he didn’t design the deck, let alone practice much with it. Apparently he had audibled to the deck on Friday night. He was also willing to admit that he wasn’t exactly sure how the combo worked while playing it in round one yesterday. In testing his team mates had all made do with phrases like “okay I win now” and “I combo out” while pushing their cards towards their opponent. Luckily for Nicastri, his round one opponent couldn’t actually bring himself to sit and watch him work it all out in his head and scooped anyway.

As we charge back into the Standard rounds, the players scramble for their constructed decks and get shuffling on the back straight as the cut to the top 8 looms. Well, David Crewe was looking for contact lens solution as one of his had fallen out, and David Zhao was taking advantage of this for a restroom break, but everyone else was scrambling, take my word for it!

Crewe began the match with a mulligan to five, making his favorable match up of Merfolk on Faeries suddenly not so favorable. However, Zhao wasn’t doing much more than activating a Mutavault or two and swinging with them after Rune Snagging a Lord of Atlantis. Crewe had a couple of Ancestral Visions counting down off to the side, but they weren’t contributing to the board situation now, which was getting worse as a Vendilion Clique came down, revealing a pair of Cryptic Commands that Crewe didn’t have enough Blue sources to play. Zhao declined to take any cards and left Crewe high and dry. On his next upkeep with the trigger of an Ancestral Vision about to pay out on the stack, Zhao sealed the deal with a Mistbind Clique, championing a Mutavault.

Game 2 started much more smoothly for Crewe, who landed a Silvergill Adept and followed it with a Merrow Reejerey unopposed, while Zhao contented himself by making a Bitterblossom. A Vendilion Clique tried to intercept the incoming attackers, but a Sage’s Dousing put pay to that. Zhao tried to steal the Reejerey with a Sower of Temptation, but Crewe had the Sunlance to get it back, and beefed up his army with two more Silvergill Adepts, revealing yet another Merrow Reejerey in hand. 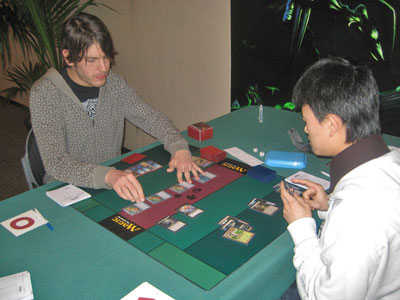 Sensing an opening, Zhao managed to bounce an incoming Reejerey with a Cryptic Command, allowing a Pendelhavened Faerie token to take down an Adept and live to tell the tale, but still dropping perilously low on life. A Lord of Atlantis from Crewe and another Sage’s Dousing on Zhao’s Terror took the match to the third game

Zhao again had the turn two Bitterblossom, but thanks to another mulligan, all Crewe could do was suspend an Ancestral Visions and shrug as a Vendilion Clique took his Sunlance, leaving him 3 land and a Reejerey. The Reejerey came into play, but Crewe was unable to stop a Mistbind Clique from tapping him out during his following upkeep. The next turn his Visions matured, but his opponent had more than enough damage in the air and the mana to counter anything Crewe offered to stop him. He tentatively played out a few ground-based Merfolk, using the Reejerey to keep his mana open, but Zhao didn’t flinch. When he swung back for the win, Zhao had the Spellstutter Sprite to stop the Cryptic Command from Crewe.