Here are the Top 4 of Saturday's Legacy Constructed event for your perusal and subsequent enjoyment.

4 Swords to Plowshares 1 Path to Exile

1 Jace, the Mind Sculptor 3 Counterspell 1 Tezzeret the Seeker 4 Brainstorm 4 Force of Will 4 Counterbalance 1 Back to Basics 1 Future Sight

4 Force of Will 3 Echoing Truth 4 Daze

Both players were still shaking off the cobwebs as they shuffled up for the round. The excitement was helping. Thibeault was hoping to extend his undefeated streak.

He got off on the right foot in the first game. He opened with a curve of Black Knight, Liliana's Spectre, Howling Banshee while Bower played land and passed. Finally Bower got out an Assault Griffin and traded it for the Banshee, falling to seven life.

Thibeault had more in reserve, replacing it with Air Servant. Bower gamely played Rise from the Grave to get back his Griffin, but Thibeault didn't forget that Air Servant had an ability, and they were on to game two. 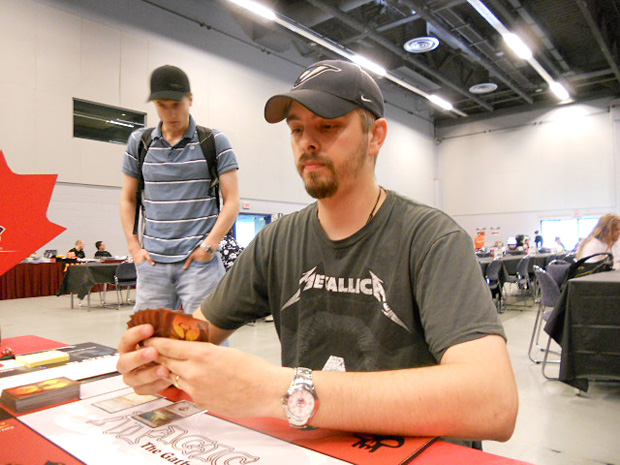 Bower flipped the script for game two, curving out with War Priest of Thune and Wild Griffin. Thibeault put Liliana's Specter in the way (catching Sign in Blood) and Bower refused to risk his Griffin. His War Priest hit for two. Bower also summoned Squadron Hawk, fetching its twin, but he was stuck on three land.

Thibeault bolstered his defenses with Gargoyle Sentinel. Bower swung in with all his creatures, and after the 2/2s were blocked a Mighty Leap killed the Sentinel, saving the War Priest in the process. Bower summoned an Elite Vanguard. A Black Knight from Thibeault put an end to his ground assault. 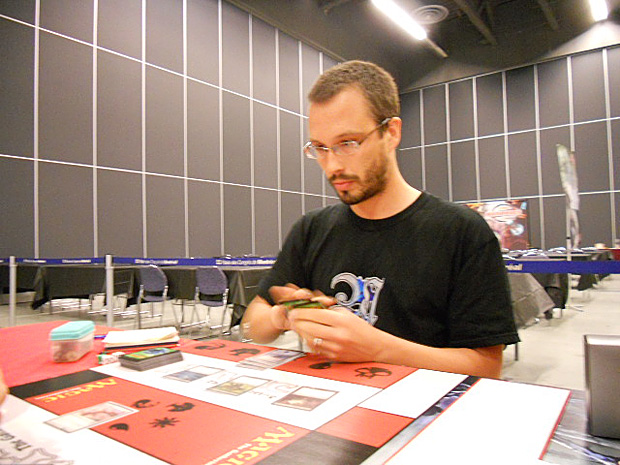 Bower swung in the air for one and played his second Hawk. Thibeault stocked up on cards with two Sign in Blood. He cast Lightning Bolt on one of the incoming Hawks, taking one. Bower brought out Assault Griffin.

Thibeault dug for more answers with Foresee, and kept all four on top. One of them was Combust for the Griffin. Bower played a Strongbox with five land in play and one card in hand. Thibeault used his seven mana to play Gravedigger to get back his Specter and snatch it: Grave Titan.

Bower sprung his Strongbox on the first try and played Brittle Effigy. Still, Thibeault was up a ton of cards and his position was only getting stronger. Another Black Knight and a Rotting Legion, and now he was sending in the attacks. Unable to recover his footing, Bower scooped.

3 Back to Nature 3 Pyroclasm 3 Ricochet Trap

3 Back to Nature 3 Autumn's Veil