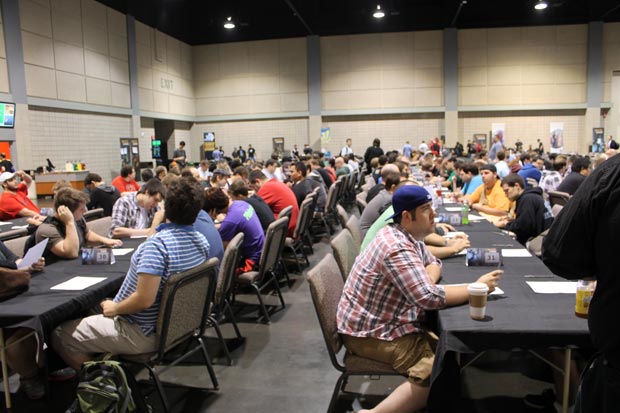 ay 2. 128 players have returned on this sunny Kansas City morning, all looking to make a run at the Top 8 of this Modern Constructed Grand Prix. Five players completed Day 1 without picking up a loss: Robert Berni, Ari Lax, and Kevin Peppler at a perfect 9-0, with Stephen Hager and Sean Weihe finishing at 8-0-1. This gives them a leg up on their quest for the trophy, but there are 123 other players vying for that same honor.

All five of the undefeated decks were different archetypes, speaking to the variety of Modern. While yesterday certainly worked to further the narrative of Modern's diversity, it also made strong strides to continue the recent dominance of the Melira Pod archetype. Since the banning of Second Sunrise, Melira Pod has risen to the top of the format, both in numbers and performance, winning Sam Pardee Grand Prix Portland along the way. This trend continues, as Melira Pod is clearly the post played deck of Grand Prix Kansas City.

Still, there are plenty of other great decks in attendance. Splinter Twin variants, Affinity, Scapeshift, and Tron all show strength here at the start of the second day of play. While Melira currently holds the lead, a lot can happen over today's six rounds.


In a battle to see who goes off first, Todd Anderson's Vengeance deck weathered Owen Turtenwald's Storm 2-1 at the start of Day Two.

The first game, however, was not indicitive of Anderson having a shot in the match, as his hand of deck-sifting sorceries such as See Beyond and Faithless Looting found nothing that could set up for a lethal turn involving Goryo's Vengeance and Griselbrand. In fact, he couldn't even use the flashback on his Faithless Looting since he was forced to discard Emrakul, the Aeons Torn, which shuffled his graveyard back into his deck. 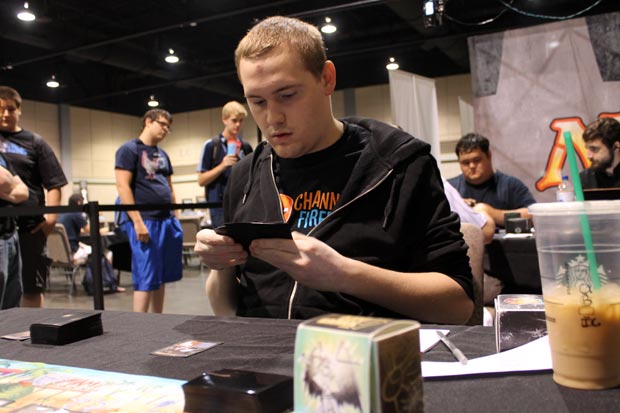 Turtenwald, meanwhile, sculpted a hand that was resilient against disruption, letting him fight through a Thoughtseize and an Izzet Charm on his Goblin Pyromancer to build up a big storm on turn five. The big turn involved Pyretic Ritual, Desperate Ritual with a splice from arcane via another copy of the Champions of Kamigawa card, Manamorphose, the second Desperate Ritual, and then finally Past in Flames, which made the Grapeshot in Turtenwald's hand easily lethal when all of those rituals were flashed back for more mana.

The second game however went much closer to plan for Anderson, but he was sweating a bit when Turtenwald led off the second turn with Pyretic Ritual into Manamorphose. Goblin Electromancer gave him a powerful outlet for accelerating his mana, but the second Manamorphose that came found nothing of value, and when Anderson untapped on the third turn, it was game over.

Anderson's third turn let him get Griselbrand into the graveyard via Faithless Looting. Goryo's Vengeance returned the legend to play. It attacked in, dropping Turtenwald to 8. Anderson paid 14 life to draw fourteen cards, and Fury of the Horde let Griselbrand attack again. Turtenwald fell to 1, and after Anderson drew another seven cards, a second Fury of the Horde wrapped things up. 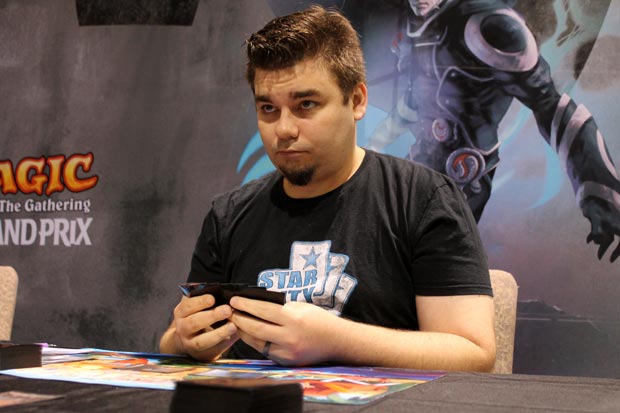 The third and final game was a tale of what happens when combo decks don't get their stellar draws, as both players struggled to amount any sort of big turns. While Turtenwald was busy flooding out, despite a very land light deck, Anderson struggled to find a creature to go with his in-hand Through the Breach.

At least until the turn before Turtenwald was set to storm off, with the ritual needed to complete his big turn waiting on top of his deck thanks to Serum Visions. Anderson drew his final card, finding Griselbrand. Through the Breach was cast, and Griselbrand made its appearance for an attack. Anderson drew seven cards after gaining his life, but didn't find Fury of the Horde. Another 7 life, dropping Anderson to 8, found one, and another attack put Anderson one Fury of the Horde away from winning. He paid another 7 life, going back to 8, but didn't find Fury of the Horde.

Anderson agonized over the decision. If he whiffed, he was certainly dead, but if Turtenwald untapped, he was also giong to lose. Anderson went to 1 life, drawing seven cards and finding one of the few remaining Fury of the Hordes to finish off Turtenwald.

"My goldfish is supposed to be faster than them," Anderson said. "My draw was atrocious in the match though. Game one was bad and in that third game I was about two turns slower than usual."

The match, as Anderson said, really came down to who drew better and went off faster. That said, Anderson also had some discard to have some form of interaction with other combo decks. Turtenwald, however...

"I sided in Dispel, and that was it," he confirmed after the game, when I asked him whether any of his sideboard was utilized. Turtenwald's hope was that he could just go off faster than Anderson, as that was the only real line of play he had, with most of his sideboard staying where it was. Storm has a very fast draw for comboing off if the opponent doesn't interact with it, but that doesn't leave much room for modifications in between games if you want to keep that kind of speed.


First, allow me to introduce you to my friend, Numbers:

As you can see from this, there are quite a few different deck archetypes in Day 2. Thirty-six to be exact. Amidst this large and varied field, however, some trends can definitely be seen.

Taken solely on the individual deck types, Melira Pod is clearly the big dog of this tournament. Coming in at over 10% of the Day 2 field, Melira Pod continues the run it has been on since Portland, and continues the strong performance we saw it put up throughout the course of Day 1. What is surprising, however, is that Affinity is the second-most played deck in Day 2. We watched Affinity drop off of the top tables during the course of Day 1, which was surprising in itself considering the deck's strong performance at Grand Prix Portland. It now appears that, while Affinity had fallen off of the top tables, it merely fell to some of the lower lying branches of that tree, putting a large number of players through to Day 2.

Combined, the three Splinter Twin variants would be the third-most played deck in the tournament. That said, it is unfair to group them all together, as they play fairly differently outside of the combo kill. After watching UWR Twin slowly subsume UR Twin's spot in the metagame over the course of yesterday, it was again surprising to see that there were actually more UR Twin variants in Day 2 than UWR. One of each version made it to the undefeated mark on Day 1, so there is still much speculation to be done about which version is actually better.

In the same boat as the Splinter Twin variants, a combination of the two major Jund variants, traditional and Ajundi, would actually tie Melira Pod for the largest deck in the tournament, but they can't be combined because they play incredibly differently in certain matchups. The addition of white for some combination of Path to Exile, Lingering Souls, and Ajani Vengeant gives Ajundi a distinct edge in some matchups, Melira Pod in particular. Still, at the end of the day, Liliana of the Veil is still the glue that holds the deck together and is the card that most people fear coming from decks with Swamps.

The two other big decks in Day 2 are decks that are everpresent in Modern, yet never quite seem to get the results that put them largely into the public eye: UWR Geist and RG Tron. The Geist deck is distinct from the UWR Control version of the deck that Sammy Tukeman used to make the finals of Grand Prix San Diego. Geist is more of a midrange creature deck, one similar to the UWR Midrange deck that is performing admirably in Standard right now. Tron, on the other hand, has gone through a number of variants over its lifetime, with the most recent Modern version relying on green and red for cards like Sylvan Scrying and Ancient Stirrings to find the pieces it needs to win. It has a reasonable place in Modern right now, as cards like Karn Liberated and Wurmcoil Engine are often able to end games before they begin, even in the fast-paced world of Modern. Still, like UWR Geist, the deck seems to always be around, but hasn't really had that breakthrough win that gives it the spotlight it so desperately craves.

Finally, here is a treat for those of you at home. Here are generic sample Decklists (no sideboards) for each of the archetypes with more than five representatives in Day 2 of Grand Prix Kansas City, in order of representation. Hopefully this will give you a good idea of what the players here in Day 2 are going to have to go through to get that title.

4 Huntmaster of the Fells
36 Cards

4 Grove of the Burnwillows 1 Linvala, Keeper of Silence 1 Voice of Resurgence
60 Cards