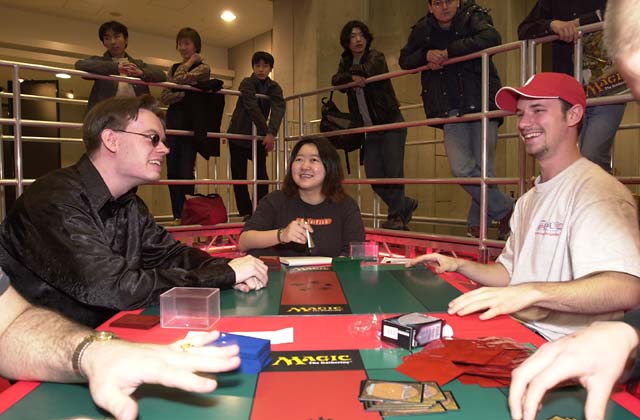 Craig Jones and Ryan Fuller were both undefeated after Day 1

The field was clearly dominated by Red. Green/Red and Black/Red shared the crown, with both placing 7 players in the Top 32, though Green/Red far outstripped Black/Red in total players continuing to Day 2. Somewhat surprising to most players was the failure of Black/Blue/Red Control and the success of various Black/Blue/White control decks, most of them containing Dromar. While Black/Red/Blue accounted for only a dozen players, their White counterparts made up over 15% of the field for Day 2.

Several other decks made it to Day 2, but none with spectacular results. Black/Blue control of numerous varieties splashed in some results, while John Ormerod's Blue/White Aggrocontrol deck, various "Domain" style decks, and a few Blue/White/Green Phelddagrif decks all came in with less than a half-dozen players.

While Green/Red and Black/Red decks showed up in roughly equal numbers at this Pro-Tour, it was Green/Red that really shined on Day 1. Though it performed strongly, it didn't dominate the top of the field. The Green/Red decks have a consistency that many of the other decks did not have, and often Green/Red could easily punish a player whose game stalled for a short moment. Ryan Fuller's Green/Red deck included 14 two-drops, and 8 haste creatures, for example.

Black/Red, on the other hand, didn't bring as many people into Day 2, but fully a third of the people playing in Day 2 with Black/Red are in the Top 32. Daniel O'Mahoney-Schartz was the top Black/Red player in the field at the end of Day 1, playing the Wisconsin designed deck featuring Crypt Angels and no Pyre Zombie. Other successful players also have their own innovations, and Black/Red's success is without doubt.

Dromar and other Black/Blue/White decks brought in acceptable numbers for Day 2, but nothing too overwhelming. Michael Turian was one of the highest finisher with the deck archetype, running both Fact or Fiction and Probe, as well as some surprising choices such as Ertai, the Corrupted and Sunscape Familiar.

One of the more interesting success stories of the tournament was "Team Godzilla" and their Blue/White Aggro-Control deck. Metagamed to beat a field heavy in Red, their choice paid off. All but one of the seven people with the deck continued on to Day 2, though the jury is still out about the ultimate success of the deck. Two players, Brian Selden and Zvi Mowshowitz, were at the top of the field, though most of the people playing the deck would need a strong finish to be in contention for Top 8.

The remainder of the decks made Day 2 in such small numbers, it is difficult to tell whether or not they are viable decks. Olle Rade's had the highest finishing Black/Blue control deck, running only Ravenous Rats and Nightscape Familiar to finish off the opponent. The other successful decks appear to be Questing Pheldagriff based decks, split between "Domain" and more typical Blue/White/Green decks and the few other decks included a single Obliterate deck.