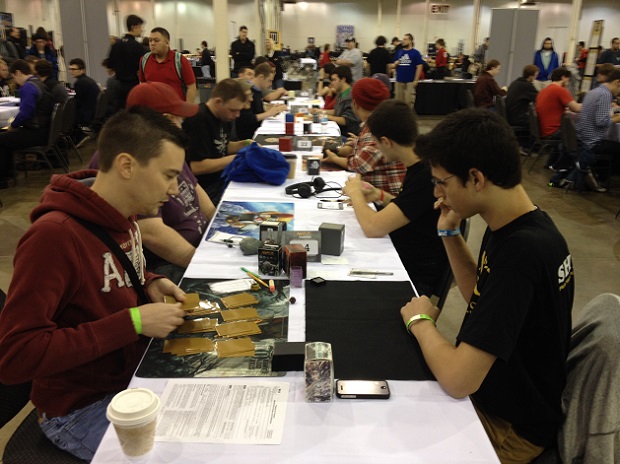 elcome back to Grand Prix Washington, D.C. We've worked our way through the largest Day 1 field for a North American Legacy Grand Prix, and Sunday promises to offer a field packed with players slinging spells from the whole of Magic's history.

235 players met the 7-2 threshold to return for a run at the Top 8, including seven players with pristine 9-0 records: No. 20 Craig Wescoe, Andrew Cuneo, Mike Nyberg, Ted McCluskie, Chas Hinkle, Wayne Polimine, and Rudy Briksza. Dustin Droggitis and Denis Ulanov also maneuvered through the field with nary a loss, clocking in at 8-0-1.

But there's no Rest in Peace for any of them, as there are plenty of top pros nipping at their heels. No. 4 Shahar Shenhar is the highest ranked player left, with No. 10 Sam Black, No. 13 Eric Froehlich, No. 16 Brian Kibler, No. 22 Owen Turtenwald, and No. 25 Christian Calcano all making the cut as well. Other notable names to make the cut include Chris Pikula, Todd Anderson, Gaudenis Vidugiris, and Tomoharu Saito.

But with a wide-open field, nary a dominant deck to be found, and six rounds in front of us, it's just about anyone's game. Follow along all day as we bring you all of the action on video and text right up till the point where we crown a champion of Grand Prix D.C. 2013.

4 Brainstorm 4 Abrupt Decay 2 Force of Will

4 Abrupt Decay 4 Brainstorm 4 Force of Will