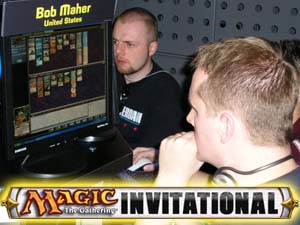 The Great One is back! Former Grand Prix, Pro Tour, and World Champion Bob Maher sits atop the heap at 6-0, a full two games better than any other competitor! The suave Midwesterner ran the table in Pack Draft with his triple-Invasion double-Seventh beat down deck, then surprised everyone by going 3-0 in the Auction of the People with the much-maligned Heather Hudson deck, due in no small part to the "junk rare" AEther Rift.

And what of the past winners? Jens "Solemn Simulacrum" is puttering along at 3-3. But the big shocker is at the very bottom of the standings… both Jon "Shadowmage Infiltrator" Finkel and Kai "Voidmage Prodigy" Budde are a pathetic1-5! Are they not the two best players to ever summon a monster? Not today they weren't! Pride is certainly at stake as these two once-proud warriors slap-fight one another to stay out of the basement for the rest of the week.

Coming tomorrow: Eighth Edition Rochester Draft (Oooooh!), Mirrodin Block Constructed (Ahhh!), and a look at the potential prize cards submitted by the twisted minds of the Invitationalists! Be there, good fellows, and revel!