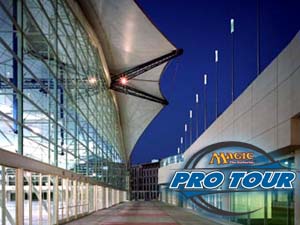 After seven rounds of draft, Anton Jonsson is on top of the standings with an undefeated record of 7-0. Jonsson has been the picture of consistency throughout his career, and at this pace, San Diego will just add another accomplishment to his growing resume. Joining him in the undefeated bracket are Antoine Ruel and Jean Charles Salvin. Christophe Haim is right below them in fourth, and yes, if you're keeping track, three of the Top 4 players at the moment are French. Other French players at 6-1 are Raphael Levy and Antoine Menard. It's been said that France and Japan are the two dominant forces in Magic at the moment, and looking at these standings, that theory gains even more credence.

Speaking of Japan, Masashi Ooiso is quickly emerging as Japan's top star, also emerging from today's rounds with a 6-1 record, and with tiebreakers good for sixth place. At this pace, he'll earn his third Pro Tour Top 8, which is extremely impressive if you keep in mind that he was a rookie last year. Joining him at 6-1 is Kazuya Hirabayashi, a constructed specialist who is well known in Japan, but had yet to make a significant impact in international competition until today. Right below them with 5-2 records are Masahiko Morita, and Akira Asahara.

Gary Wise has declared his retirement at the end of this season, and if that's true, the respected Limited specialist would love to Top 8 this event. He's currently in seventh place with a 6-1 record, and many will certainly be cheering for him to excel in the next two days as his career (possibly?) begins to wind down.

Sam Gomersall has been heralded as the next big thing in Magic by the European Magic community, and his 6-1 record so far shows that his potential may be coming to fruition. It'll be interesting to see if he can keep pace and put England back on the map. Also at the top portion of the standings with 6-1 records are Brian Kibler, Gerard Fabiano, and Nicolai Herzog.

Tomorrow will feature 8 rounds of swiss including another round of booster draft, followed by a cut to Top 8. Stay tuned to our live coverage to find out who will earn the right to play in front of the Sunday cameras.