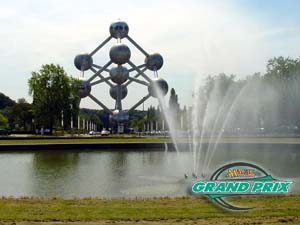 Welcome to Day two of Grand Prix Brussels. 734 players showed up to play yesterday and after a day of carnage there are now only 64 remaining. Six rounds will be played today followed by a top 8 knockout to decide the champion of GP Brussels.

The metagame was expected to feature both Affinity and Goblins and unsurprisingly both archetypes proved to be popular choices. Following them were a host of Tooth and Nail decks running Wirewood Symbiotes and enough elves with fancy come-into-play effects to generate all kinds of mayhem.

Currently leading the way are two amateurs from Germany - Tristan Gally and Johannes Mitsios - and a couple of PT experienced players looking to make a name for themselves here - Wenzel Krautman, also of Germany, and Vasilis Fatouros from Greece. Fatouros and Krautmann ripped up the field with Goblins and Gally is currently top with Elf and Nail. The biggest surprise is Mitsios' deck, a blue-white control deck featuring 4 Pristine Angel and Pulse of the Grid.

Leading the chasing pack is Olivier Ruel with black-green Cemetery but as a lot of players chose to ID the last round rather than risk missing the cut (no players survived with two or more losses) the bottom of the field is not far away.