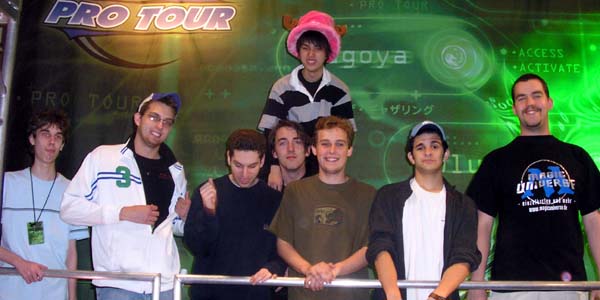 What a great weekend. We've seen the skins game payout in full effect, the buzz about the Pro Tour Players Club and Hall of Fame coursing around the event hall, 10-mana spells flying everywhere, and a complete Pro Tour virgin who led the standings until right at the end. Oh, and have we mentioned that there's still one day left?

Let's start with the decks that appeared here this weekend. Going into the final rounds, White Weenie looked hot, gobbling up slots at the top of the standings like it was seeking vengeance for people underestimating it coming into the tournament. Unfortunately for the Weenie fans, the control decks took over in the last two rounds, and only 16-year-old Ryan Cimera -- attending his first ever Pro Tour -- managed to make Day 3 with the deck.

Perhaps the coolest decks on the weekend are the Heartbeat of Spring/Myojin decks, or as we called them in the deck round-up, Myojin Flare. The French version of this deck (that also features Sway of the Stars) was good enough to get Olivier Ruel back to yet another Top 8, while the Japanese version that sports a Gifts Ungiven engine also took a spot. Rounding out the field are three 3-Color Control decks (both with Gifts Ungiven and without), a very strange German Aggro-Control deck, and only a single copy of this week's most populace deck, Sssnakesss!

Joining Ryan on Sunday will be a host of familiar names -- Olivier Ruel, Gadiel Szleifer, Mark Herberholz, and an old name that had to PTQ to get here but goes into Sunday as the No. 1 seed, Steve Wolfman. Also making Sunday appearances are German Andre Mueller, Jeff Novekoff, and the very impressive Kenji Tsumura, who repeated his Sunday appearance in Atlanta with a win over countryman Shuhei Nakamura in the final round.

With three losses bouncing you out of the tournament, it made for a tense last few rounds. Both Tsumura and Novekoff carried two losses into the start of Saturday's play, meaning they had to run the table to get to Sunday action. The flip side of that fortunate coin saw Pro Tour legend Kai Budde and his 6-0 record get dashed on the rocks of Day Two as three quick losses in three rounds sent him home.

Please join us at 10:45 ET Sunday for quarterfinals coverage on the live webcast with Randy Buehler and Mike Flores. We'll find out if the giant Myojin decks can continue to muster enough gas to both blow through the control decks and still be able to stave off the beatings of White Weenie and Sssnakesss, and also find out who will be our next Pro Tour Champion.