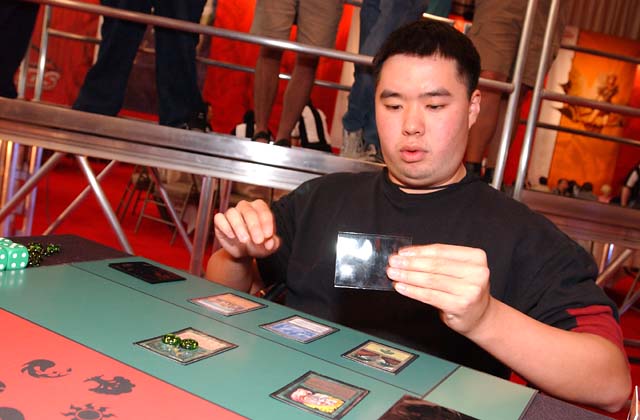 After two days and twelve rounds, the hometown hero is in first place. Gab Tsang went 6-0 on Thursday, giving him a 10-1-1 record overall and a one point lead on 4 players. Hanging out at 10-2 are two World Champions and two Europeans. 1999 champion Brian Selden and defending champion Jon Finkel have each put up 5-1 records on each day of competition. Finkel noted, with typical modesty, "I always do well at Worlds. 9th, 13th, 3rd, 10th, 1st." Wow! Slovak Republic national team member Jan Tomcani was the last undefeated player in the field, running his record to 8-0 before finishing out the day 2-2. Frenchman Antoine Ruel - previously famous mostly for being one third of team Black Ops - also put up a pair of 5-1 performances.

The last time a Canadian was in first place after Day 2 was 1997, when Jeff Donais had an enormous lead, only to squander it in the most spectacular stumble the Pro Tour has ever seen. Needing only 6 points in 7 rounds, he went 1-6. Of course, Jeff has gone on to bigger and better things and is now the head of the DCI and PT Tournament Manager.

Team Japan is in first place in the Worlds team competition. Two-time APAC champion Masaya Mori is in 18th at 9-3 while Masahiko Morita is 27th at 8-4 and champion Goro Matsuo is 7-5. Japan leads the Netherlands (whose champion Tom van de Logt is in position for a repeat Worlds Top 8 right now) by 3 points and Denmark and the USA by 6 points.

Team USA put together a spectacular Day 2 charge. The juggernaut that has won five of the six previous Worlds team championships went 6-12 on Day 1 and went to sleep in 43rd place, ahead of just four other teams. Thursday, things were different. They didn't drop a single match until the last round of the day when Brian Hegstad and Eugene Harvey were paired against each other. Hegstad lost to Harvey and Blackwell also dropped his own match, putting the champ's overall record at a still disappointing 5-7. Still, a tie for 3rd is a bit better than a tie for 43rd.

Kai Budde seems nervous in his quest for the Player of the Year title. He has a healthy lead, but there are several players who could beat him by finishing highly on Sunday. The one he has his eye on is Kamiel Cornelissen. Budde has been watching Kamiel's matches almost as closely as he's watching his own. Cornelissen, like Budde, is currently 8-4, 2 matches off the pace.

The Rookie of the Year race is much tighter. Lawrence Creech and Ken Ho were tied at 25 points coming into this tournament and Katsuhiro Mori trailed them by only 3 points. If the tournament ended right now, it would be a three-way tie! Mori (no relation to Japanese team member Masaya Mori) is 8-4 and in 30th place. Creech and Ho are each 7-5 and are in 82nd and 80th place respectively. Top 32 is worth 6 points while Top 128 is only worth 3. (Other key cut-offs include Top 24, which is worth 7 points, Top 64, which is worth 4 points, and top 48, which is worth 5.) Yet another reason why tomorrow should be interesting!

The DCI is continuing to crack down on slow play at this event. Trey van Cleave is 8-4, but three of his losses have been at least partially because of slow play penalties. He's accumulated a total of five warnings over the course of the last two days, which has resulted in two game losses, and two match losses. He's now been told that his next warning will result in a disqualification from the event without prize. After getting this ultimatum, van Cleave won his next match 2-1 in just 30 minutes, but then lost round 12. Trey isn't the only player who hasn't lost to anything but his own slow play. Chris Benafel is an insane 6-1-5. Yep - five draws. And his one loss came when he dropped game 1 to Rob Dougherty and had a second warning for exceeding the pregame sideboarding time limit before game 2 upgraded into a game loss.

Four different players put up 6-0 records on Day 2. Brock Parker had the best Day 2-only tiebreakers of the four and claimed the title "Day 2 Champion." The others who turned the trick were U.S. National team member Eugene Harvey, Canadian folk hero Gab Tsang, and Danish national team member Christoph Lippert.

The last story is a sad one. Dutchman Joost Vollebregt came up to me at the end of the day and confessed to the fact that he had just finished following up his perfect 6-0 Day 1, with an 0-6 on Day 2. All I could say was "welcome to my world."