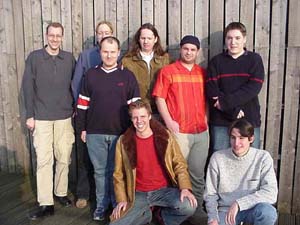 The Top 8The Grand Prix came home to Antwerp at Hanger 26 on the bank of the river Schelde, a mere ten minutes away from WotC's European Headquarters. A total of 615 competitors, mainly from Belgium, France, Germany and the Netherlands turned up for another chance to battle it out with the "black" set. Surprisingly, none of the high profile American players chose to make the journey.

There were heartbreaks for some players as Frank Karsten, leading the tournament after round 11 with a perfect record, conceded to a countryman and then slipped to 11-3 and tenth place as the pairings wouldn't allow him to draw in. Johan Kennes looked as though he'd provide the home nation with a representative in the top 8 after a last round victory, only for all the other results to go against him to leave him stranded in ninth place. At least he could console himself with USD 1500 for being the highest placed finisher in the Amateur Division.

In the end an experienced top 8 of four Germans, two Dutch, a Frenchman and a Swede battled it out for the title of Champion of Antwerp. One of those guys was Kai Budde; you might have heard of him. Yes, as might have been predicted, Kai smashed his way through the top 8 with a brutal green-black deck containing two Wild Mongrel and three Nantuko Disciple for a staggering sixth Grand Prix win. He now has twice as many titles as his closest rival. Can anything stop the German Juggernaut?