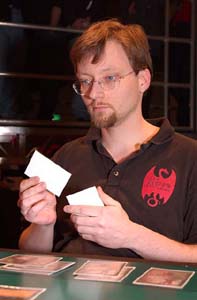 Day Two of Pro Tour Osaka showed that only three types of decks really existed in this format, the triumviarate of Mono Black Control, Blue/Green Madness and Pyschatog. Nearly 80 per cent of these archetypes make up the decks for day two, and when the dust settled, it was only these decks made the top 16!

After day one, crowd favorite Tsuyoshi Fujita was on top of the standings, attempting recreate the magic of last year's Pro Tour Tokyo. But alas, he was unable to do so, falling at the last hurdle, but managed to make top 16.

The other undeafeated player Jens Thoren was much more fortunate piloting the ubiquitous Mono Black control deck to the top eight as well as second position is the Swiss. Thoren is currently running third in the Player of the Year race before Pro Tour Osaka, and a win would put him quite close to Kai Budde (who made top 32) and within striking distance of the Player of the Year race – a feat that was thought as near impossible two Pro Tours ago.

But the king of day 2 is the founder and owner of the famous Your Move Games contingent, Robert Dougherty. This marks Dougherty's fourth foray into the final Sunday, also playing the Mono Black control deck.

But the most remarkable development of the second day is the dominance of the French contingent – who placed fully half of the top 8, as well as another in the top 16. Only two of them are really well known, the ever smiling Olivier Ruel (minus his trademark stuffed animals) and Nicolas Olivieri, who is more known as a part of the Team PT finalists Les Plus Class. But Sylvain Lauriol and Christophe Haim are not to be undone and actually represent the first time that a country outside the United States to place more than three players into an individual Pro Tour!

It seems that staying in a house full of Magic players gets you your first Top 8 berth. Or at least thats what Ken Ho's presence in the top 8 would indicate. While the experimental Magic Colony didn't appear to break the format (only two players made money in Osaka, the other being Jeff Cunningham) they did make their presence felt, playing one of the only "rogue" concept to put multiple players into day 2. Ken will be seeking to avenge missing out on Rookie of the Year, and showing that he's no rookie anymore.

Osyp Lebedowicz, though usually associated with Neutral Ground crew, actually got his technology from friend and CMU teammember Eugene Harvey. He then proceeded to completely outdo the designers of the deck and make top 8. Time will tell whether CMU broke the format with their U/B Concentrate Psychatog deck.

But the fairytale story of Pro Tour Osaka the false death knell of the Double King, David Price. The twin kingdoms of Beatdown and Qualifiers were is dire danger of losing their monarch at the end of the tournament but his Majesty did not let them down. Dave made the necessary top 32 finish to keep him on the gravy train. Dreams do happen.